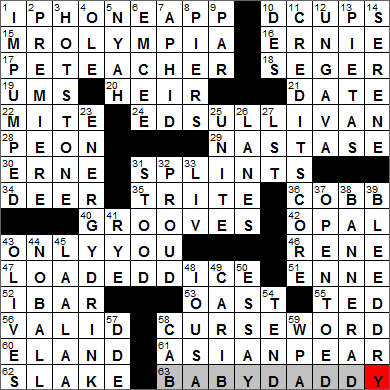 Today’s Wiki-est, Amazonian Googlies
Across
1. One was first purchased in 2008 : IPHONE APP
Basically, anyone is free to write an iPhone app, but they all have to be approved by Apple. As of 2011, Apple had approved over 10 billion apps for the iPhone!

10. Big top features? : D-CUPS
I just read that an estimated 80% of women wear the wrong size bra. Not my area of expertise obviously …

15. Title for Schwarzenegger : MR OLYMPIA
The Mr. Olympia bodybuilding competition was featured in the 1977 movie “Pumping Iron”. It was this film that gave Arnold Schwarzenegger and Lou Ferrigno a start to their acting careers.

Arnold Schwarzenegger was born in Graz in Austria, the son of the local police chief. Schwarzenegger’s family name translates into the more prosaic “black plough man”.

16. Half of a TV duo : ERNIE
I’ve always believed that the “Sesame Street” characters Bert and Ernie were named after two roles played in the Christmas classic “It’s a Wonderful Life”. In the movie, the policeman’s name is Bert and his taxi-driving buddy is named Ernie. However, the “Sesame Street” folks have stated that the use of the same names is just a coincidence.

18. Leader of the Silver Bullet Band : SEGER
Bob Seger struggled as a performing artist right through the sixties and early seventies before becoming a commercial success in 1976 with the release of his album “Night Moves”. Since then, Seger has recorded songs that have become classics like, “We’ve Got Tonight” and “Old Time Rock & Roll”.

24. “Toast of the Town” host : ED SULLIVAN
Ed Sullivan’s most famous television role was as host of the “The Ed Sullivan Show”, which ran from 1948 to 1971, a total of 23 years. In that final year, a new set of CBS executives wanted to update the image of the network and announced the cancellation of most of the “old” shows including “The Ed Sullivan Show”. Sullivan was so mad at the decision that he refused to make a “farewell” episode.

“Toast of the Town” was a television variety show that first aired in 1948, and was hosted by Ed Sullivan. The show became known informally as “The Ed Sullivan Show” quite quickly, and the informal name was adopted as the official title in 1955.

28. Grunt : PEON
A peon is a lowly worker with no real control over his/her working conditions. The word comes into English from Spanish where it has the same meaning.

29. 1991 International Tennis Hall of Fame inductee : NASTASE
I think that Ilie Nastase was the most entertaining tennis player of the 1970s, the days of Jimmy Connors, Bjorn Borg and John McEnroe. No matter how much pressure there was in a match, Nastase always had time to give the crowd a laugh.

30. Cliff dweller : ERNE
The ern (also erne) is also called the white-tailed eagle, and the sea-eagle.

31. Ambulance supply : SPLINTS
Our word “ambulance” originated in the French term “hôpital ambulant” meaning field hospital (literally “walking hospital”). In the 1850s, the term started to be used for a vehicle transporting the wounded from the battlefield, leading to our “ambulance”.

34. Game with points : DEER
The antlers on a deer come to points. The higher the number of points, the more prized the head of the deer as a trophy, so I am told …

36. Outfielder who was a member of baseball’s All-Century Team : COBB
Ty Cobb was one of the richest baseball players of all times. When he retired, Cobb was a major stockholder of the Coca-Cola Corporation. By the time he passed away in 1961, Cobb had an even bigger investment in General Electric. He left an estate after his death worth about $86m (in 2008 dollars).

42. ___ glass : OPAL
Milk glass is an opaque, milky-white glass that is also called “opal glass”. The white color of the glass is the result of adding a material such as bone ash, which makes the glass opaque.

46. Peace Nobelist Cassin : RENE
René Cassin drafted the Universal Declaration of Human Rights after WWII that was adopted by the General Assembly of the United Nations in 1948. This work led to Cassin being awarded the Nobel Peace Prize in 1968.

47. Crooked bones? : LOADED DICE
Dice were originally made from “knucklebones”, bones found in the ankles of a sheep. As a result, dice are often referred to as “bones”.

51. Trix alternative? : -ENNE
Both “-trix” and “-enne” are suffixes that feminize nouns.

53. Drying device : OAST
An oast is a kiln used for drying hops as part of the brewing process. Such a structure might also be called an “oast house”.

55. 2012 Seth MacFarlane comedy : TED
“Ted” is a movie written, directed, produced and starring Seth MacFarlane. In the story, MacFarlane voices a teddy bear who is the best friend of a character played by Mark Wahlberg.

60. Impala relative : ELAND
A eland is a large African antelope, in fact the largest on the continent.

62. Satisfy : SLAKE
“To slake” is to satisfy a craving, as in slaking one’s thirst.

Down
6. Host : EMCEE
“Emcee” come from “MC”, an abbreviation for the Master or Mistress of Ceremonies.

7. Horticultural headache : APHID
What we commonly call aphids belong to the genus “aphis”.

12. Northern Quebec’s ___ Peninsula : UNGAVA
The Ungava Peninsula in Quebec is part of the Labrador Peninsula that is on the eastern shore of Hudson Bay.

13. Some Vatican art : PIETAS
The Pietà is a representation of the Virgin Mary holding in her arms the dead body of her son Jesus. The most famous Pietà is probably the sculpted rendition by Michelangelo which is located in St. Peter’s Basilica in Vatican City. In some depictions of Mary with Jesus in her arms, mother and son are surrounded by other figures from the New Testament. These depictions are known as “Lamentations”.

27. W.W. II inits. : LST
LST stands for Landing Ship, Tank. LSTs were the large vessels used mainly in WWII that had doors at either ends through which tanks and other vehicles could roll off and onto beaches. The design concept persists to this day in the huge fleet of commercial roll-on/roll-off car ferries, all inspired by the LST.

41. Common cocktail component : RYE
For whiskey to be labelled as “rye” in the US, it has to be distilled from at least 51% rye grain. In Canada however, a drink called rye whiskey sometimes contains no rye at all.

43. Common cocktail components : OLIVES
Our word “cocktail” first appeared in the early 1800s. The exact origin of the term is not clear, but it is thought to be a corruption of the French word “coquetier” meaning “egg cup”, a container that was used at that time for serving mixed drinks.

44. Cricket violation : NO BALL
The offense of “no ball” in the sport of cricket is usually an illegal delivery by a bowler.

45. Yellow Teletubby : LAA-LAA
“Teletubbies” is a children’s television show produced by the BBC in the UK and shown over here on PBS. The show attracted a lot of attention in 1999 when Jerry Falwell suggested that one of the Teletubbies characters, Tinky Winky, was a homosexual role model for children.

49. Antilles native : CARIB
The Caribs are an American Indian people that live in the Lesser Antilles islands, part of the West Indies. The Caribbean Sea takes its name from the Carib people.

50. Bacon product : ESSAY
The English philosopher and statesman Francis Bacon wrote a celebrated and respected collection of essays called “The Essayes”, first published in 1597. My favorite of these essays is “Of Simulation and Dissimulation”, which observes:

57. W.W. II inits. : DDE
General Dwight D. Eisenhower (DDE) was in command of the European Theater of Operations (ETO) during WWII. If you’re a WWII buff like me, then I recommend you take a look at a great, made-for-TV movie starring Tom Selleck as Eisenhower called “Ike: Countdown to D-Day” that came out in 2004.

58. Meter site : CAB
We call cabs “taxis”, a word derived from “taximeter cabs” that were introduced in London in 1907. A taximeter was an automated meter designed to record distance travelled and fare to be charged. The term “taximeter” evolved from “taxameter”, with “taxa” being Latin for “tax, charge”.

59. New Deal program, for short : WPA
The Work Progress Administration (WPA) was the largest of the New Deal agencies. The WPA employed millions of people during the Depression, putting them to work on various public works projects. The total spending through the WPA from 1936 to 1939 was nearly $7 billion. We have to give the federal government credit for taking an enlightened view of what types of project qualified for financial support, so artists who could not get commissions privately were hired by the government itself. The result is a collection of “New Deal Art”, including a series of murals that can be found in post offices around the country to this day.