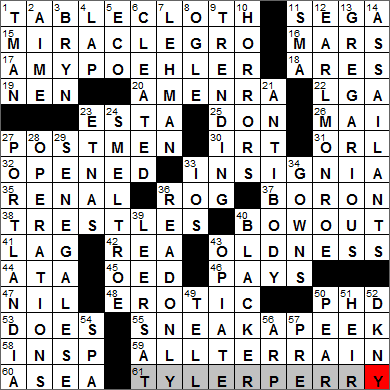 Today’s Wiki-est, Amazonian Googlies
Across
11. Streets of Rage maker : SEGA
Sega is a Japanese video game company headquartered in Tokyo. Sega actually started out 1940 in the US as Standard Games and was located in Honolulu, Hawaii. The owners moved the operation to Tokyo in 1951 and renamed the company to Service Games. The name “Sega” is a combination of the first two letters of the words “Se-rvice” and “Ga-mes”.

15. Gardening brand : MIRACLE-GRO
Scotts Miracle-Gro Company was founded in 1868 by one Orlando Scott, initially selling seed to the agricultural industry. In the early 1900s, Scotts started to sell to homeowners, mainly supplying lawn seed. The company merged with the gardening company Miracle-Gro in 1955.

16. Roman 18-Across : MARS
(18A. Greek 16-Across : ARES)
The Greek god Ares is often referred to as the Olympian god of warfare, but originally he was regarded as the god of blood-lust and slaughter. Ares united with Aphrodite to create several gods, including Phobos, Deimos and Eros. The Roman equivalent to Ares was Mars.

17. Former “Weekend Update” host on “S.N.L.” : AMY POEHLER
Amy Poehler was a cast member on “Saturday Night Live” from 2001 to 2008, notable for appearing in many great sketches, including those where she played Hillary Clinton opposite Tina Fey’s Sarah Palin. Poehler also starred with Fey in the 2008 movie “Baby Mama”, and now has her own show on NBC called “Parks and Recreation”.

19. Three-time All-Star pitcher Robb : NEN
Robb Nen is a former relief pitcher, best known for as a player with the San Francisco Giants.

20. Karnak Temple deity : AMEN-RA
Amun (also Amon, Amen and “Amun-Ra”) was a god in Egyptian mythology. Amun lends his name to our word “ammonia”. This is because the Romans called the ammonium chloride that they collected near the Temple of Jupiter Amun, “sal ammoniacus” (salt of Amun).

The Karnak Temple Complex is located near Luxor on the banks of the River Nile in Egypt. The most famous structure at Karnak is the Great Temple of Amun.

22. Airport on Flushing Bay, in brief : LGA
Fiorello La Guardia was the Mayor of New York from 1934 to 1945, racking up three full terms in office. The famous airport that bears La Guardia’s name was built at his urging, stemming from an incident that took place while he was in office. He was taking a TWA flight to “New York” and was outraged when the plane landed at Newark Airport, in the state of New Jersey. The Mayor demanded that the flight take off again and land at a small airport in Brooklyn. A gaggle of press reporters joined him on the short hop and he gave them a story, urging New Yorkers to support the construction of a new commercial airport within the city’s limits. The new airport, in Queens, opened in 1939 as New York Municipal, often called “LaGuardia” as a nickname. The airport was officially relabeled as “LaGuardia” in 1947.

23. “My Baby No ___ Aqui” (Garth Brooks song) : ESTA
Country singer Garth Brooks retired from recording and performing in 2001, and then came out of retirement in 2009. You can go see him perform at the Encore Hotel and Casino on the Las Vegas Strip.

26. When the French celebrate Labor Day : MAI
“Mai” is the French for the month of “May”.

30. Line to Wall Street, for short : IRT
The Interborough Rapid Transit Company (IRT) was the original private operator of the New York Subway when it opened in 1904. The city took over ownership of the system in 1940, but the lines originally operated by the IRT are still known by the IRT moniker.

31. N.B.A.’s Magic, on sports tickers : ORL
The Orlando Magic were formed in 1989 as an NBA expansion team. A local paper was asked to run a competition to suggest names for the new team and the community came up with its four top picks of “Heat”, “Tropics”, “Juice” and “Magic”. A committee then opted for “Orlando Magic”. A good choice I think …

36. Critic Ebert, informally : ROG
Roger Ebert co-hosted a succession of film review television programs for over 23 years, most famously with Gene Siskel until Siskel passed away in 1999. Ebert was diagnosed and treated for thyroid cancer in 2002, and finally succumbed to a recurrence of the disease in April 2013.

37. Element with a low atomic number that is not found naturally on Earth : BORON
Boron is the chemical element with the atomic number of 5. It lies over to the right in Group 13 of the Periodic Table of the Elements. Uncombined, elemental boron is not found naturally on Earth. The boron that is mined is found in oxide form, not as uncombined boron.

38. They cross many valleys : TRESTLES
A trestle is a frame that is used as a support, particularly for a bridge.

42. Chris with the 1978 hit “Fool (If You Think It’s Over)” : REA
Chris Rea is a singer-songwriter and respected blues guitar player from England.

45. Its first complete ed. was published in 1928 : OED
The “Oxford English Dictionary” (OED) contains over 300,000 “main” entries and 59 million words in total. It is said it would take a single person 120 years to type it out in full. The longest entry for one word in the second edition of the OED is the verb “set”. When the third edition was published in 2007, the longest entry for a single word became the verb “put”. Perhaps not surprisingly, the most-quoted author in the OED is William Shakespeare, with his most quoted work being “Hamlet”. The most-quoted female author is George Eliot (aka Mary Ann Evans).

50. T.A.’s pursuit, maybe : PHD
PhD is an abbreviation for “philosophiae doctor”, Latin for “teacher of philosophy”.

A T.A. is a professor’s Teaching Assistant.

61. Movie mogul whom Forbes magazine once named the highest-paid man in entertainment : TYLER PERRY
Tyler Perry is an actor best known for playing “Madea”, a character that he plays in drag.

Down
1. Fed concerned with forgery : T-MAN
A T-man is a law-enforcement agent of the US Treasury (the “T” stands for Treasury).

3. Leader in women’s education? : BRYN
I used to live not far from Bryn-mawr (also “Brynmwar”) in Wales, the town with the highest elevation in the country. Appropriately enough, “bryn mawr” is Welsh for “big hill”. There is also a Bryn Mawr in Pennsylvania (note the different capitalization) that is named after its Welsh counterpart. At the Pennsylvania location there’s a Bryn Mawr college, a private women’s school that was the first American university to offer graduate degrees to women.

12. N.B.A. Hall-of-Famer who, with Walt Frazier, formed the Knicks’ “Rolls Royce Backcourt” : EARL MONROE
Earl Monroe is a retired professional basketball player who played for the Baltimore Bullets and the New York Knicks.

Walt Frazier is a retired professional basketball player, captain of the New York Knicks when they won their only NBA championships, in 1970 and 1973.

21. Bacterium binder : ANTIBODY
Antibodies are y-shaped proteins that recognize antigens on foreign bodies in the body such as bacteria and viruses. The antibodies combine with those foreign bodies and neutralize them.

23. Old lab burners : ETNAS
Etna (after the volcano) is another name for the Bunsen Burnerused in the laboratory.

24. Common sushi garnish : SMELT ROE
Smelt is the name given to several types of small fish.

27. TV sketch comedy set in the “city where young people go to retire” : PORTLANDIA
“Portlandia” is a satirical sketch show that is aired on the Independent Film Channel (IFC). The show is set in Portland, Oregon and takes its name from a statue called “Portlandia” which sits above the entrance to a building in downtown Portland. The statue is a copper repoussé work, and is second in size in the US only to the Statue of Liberty.

28. They’re ordered by mathematicians : OPERATIONS
Mathematical operations (such as addition, subtraction, multiplication and division) are carried out in a specific order in an equation. For example, one multiplies before one adds.

29. Some French-speaking Africans : SENEGALESE
The Republic of Senegal is a country on the far western coast of Africa. For many years Senegal was a French colony, gaining independence in 1960. The capital of Senegal is Dakar, a city located on the Cap-Vert Peninsula that juts out into the Atlantic Ocean.

43. It’s a downer : OPIATE
Opiates are the narcotic alkaloids found in the opium poppy plant, although some synthetic versions and derivatives of the same alkaloids are also called opiates. To produce opiates, the latex sap of the opium poppy is collected and processed. The naturally-occurring drugs of morphine and codeine can both be extracted from the sap. Some synthesis is required to make derivative drugs like heroin and oxycodone.

50. Jelly Belly flavor : PEAR
The Jelly Belly Candy Company is located not far from where I live in California. My son has toured the factory with his girlfriend and tells me its a great way to spend a few hours, if you’re in the area …

52. Fashion company with a Big Apple flagship store : DKNY
Donna Karan is an American fashion designer, creator of the DKNY (Donna Karan New York) clothing label. Karan was very much raised in the fashion industry, as her mother was a model and her stepfather a tailor.

56. Calder contemporary : ARP
Hans Arp was a French artist renowned for his work with torn and pasted paper, although that wasn’t the only medium he used. Arp was the son of a French mother and German father and spoke both languages fluently. When he was speaking German he gave his name as Hans Arp, but when speaking French he called himself Jean Arp. Both “Hans” and “Jean” translate into English as “John”. In WWI Arp moved to Switzerland to avoid being called up to fight, taking advantage of Swiss neutrality. Eventually he was told to report to the German Consulate and fill out paperwork for the draft. In order to get out of fighting, Arp messed up the paperwork by writing the date in every blank space on the forms. Then he took off all of his clothes and walked with his papers over to the officials in charge. He was sent home …

Alexander Calder was an American sculptor and artist. Calder is famous for having invented the mobile sculpture, a work made up of several pieces hanging on a string in equilibrium. In effect they are what we might known as “mobiles”, operating on the same principle as mobiles that sit over cribs in a nursery.

57. Historic beginning? : PRE-
We define “prehistory” as that span of time before man started written records or had writing systems.