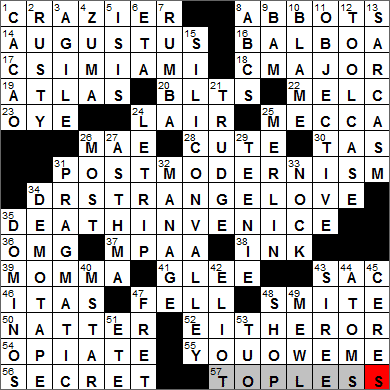 Today’s Wiki-est, Amazonian Googlies
Across
14. Summer time eponym : AUGUSTUS
Gaius Octavius Thurinus (often called Octavian) was the adopted son of Gaius Julius Caesar. After Julius Caesar was assassinated, Octavian came to power in Rome and teamed up with Mark Antony and Marcus Aemilius Lepidus in what was called the Second Triumvirate. When the triumvirate fell apart, especially after Antony’s defeat at Actium, Octavian became more powerful within the Roman Republic. Several years later he wrested sufficient power from the Roman Senate to end the Republic and begin the Roman Empire. As the first Emperor of Rome, Octavian was given the name Caesar Augustus. The month of August, originally called “Sextilis” in Latin, was renamed in honor of Augustus.

16. Peso : Mexico :: ___ : Panama : BALBOA
The balboa is one of the currencies used in Panama, along with the US dollar. The currency was named in honor of Spanish explorer Vasco Núñez de Balboa.

Vasco Núñez de Balboa was a Spanish explorer, the man who led the 1513 expedition across the Isthmus of Panama to become the first European to set eyes on the Pacific Ocean. On reaching the ocean, Balboa walked into the water up to his knees, raised his sword and an image of the Virgin Mary, and claimed possession of the ocean (that he named the South Sea) and all adjoining lands in the name of the king and queen of Spain.

17. “NYC 22” replaced it in 2012 : CSI: MIAMI
I quite enjoy the “CSI” franchise of television shows, except “CSI: Miami”. I find the character played by David Caruso to be extremely annoying. Apparently it was cancelled in 2012. No loss …

18. Key represented by all white keys on a piano : C MAJOR
In the world of music, the key of C major has no flats or sharps.

19. Plate holder : ATLAS
In the world of printing, a plate is a print taken from a sheet of metal or rubber. For example, maps in an atlas are usually referred to as plates.

The famous Flemish geographer Gerardus Mercator published his first collection of maps in 1578. Mercator’s collection contained a frontispiece with an image of Atlas the Titan from Greek mythology holding up the world on his shoulders. That image gave us our term “atlas”.

20. Kin of clubs : BLTS
The BLT (bacon, lettuce and tomato) is the second most popular sandwich in the US, after the plain old ham sandwich.

22. Sporty Spice, by another name : MEL C
The five members of the English pop group the Spice Girls are:

24. Batcave, e.g. : LAIR
Wayne Manor is where Bruce Wayne lives, the alter-ego of Batman. It is a huge manor that lies just outside Gotham City. Looking after the house is the Wayne family servant, Alfred. Beneath the grounds of the manor is an extensive cave system where Bruce Wayne put together his Batcave. Access is to the cave is via a staircase behind a hidden door. The door is opened by moving the hands of a non-functioning grandfather clock to 10:47, the time at which Wayne’s parents were murdered. It is the murder of his parents that sets Bruce off on his journey of crime fighting.

25. End point of a common journey : MECCA
Mecca is in the Makkah province of Saudi Arabia and is the holiest city in Islam. Every year several million Muslims perform the Hajj, a holy pilgrimage to Mecca.

26. Ginnie ___ : MAE
Ginnie Mae is the familiar nickname for the Government National Mortgage Association (GNMA), a government-owned corporation created in 1968 with the objective of promoting home ownership. The “Ginnie Mae” nickname is derived from the GNMA acronym.

31. Style of New York’s Sony Building : POSTMODERNISM
The Sony Building in New York City was completed in 1984, and was opened as the AT&T Building. AT&T sold the building to Sony in 2002, and now a deal has been made for sony to hand it over to the Chetrit Group.

34. ’60s film character wearing one black glove : DR STRANGELOVE
“Dr. Strangelove” is a black comedy directed and produced by Stanley Kubrick, released in 1964. The big star in the film is the great Peter Sellers, who plays three key roles.

35. Literary classic featuring the teen Tadzio : DEATH IN VENICE
“Death in Venice” is probably the most famous novella by author Thomas Mann. The novel was originally published in German in 1912 as “Der Tod in Venedig”. The story was famously adapted for the big screen in 1971, in a movie starring Dirk Bogarde.

37. Grp. concerned with violence levels : MPAA
The Motion Picture Association of America’s (MPAA) film-rating system (R, PG-17, G etc.) is purely voluntary and is not backed by any law. Movie theaters agree to abide by the rules that come with the MPAA ratings in exchange for access to new movies.

38. With 43-Across, part of a squid : INK
(43. See 38-Across : SAC)
Octopuses and squid have the ability to release a dark pigment into the water as a means of escape. The dark pigment is called cephalopod ink (the squid and octopus belong to the class cephalopod). The dark color is created by melanin, the same substance that acts as a pigment in human skin.

39. Long-running Mell Lazarus comic strip : MOMMA
Mell Lazarus is known as the creator of two long-running comic strips. “Miss Peach” ran from 1957 to 2002, and “Momma” first appeared in 1970 and is still going strong. Lazarus started his career as an apprentice to famed cartoonist Al Capp.

54. Stupefying thing : OPIATE
Opiates are the narcotic alkaloids found in the opium poppy plant, although some synthetic versions and derivatives of the same alkaloids are also called opiates. To produce opiates, the latex sap of the opium poppy is collected and processed. The naturally-occurring drugs of morphine and codeine can both be extracted from the sap. Some synthesis is required to make derivative drugs like heroin and oxycodone.

Down
1. Tree with large seedpods on its trunk : CACAO
The flowers of the cacao tree grow in clusters directly on the trunk, and on older branches. The pollinated flowers turn into ovoid cacao pods, each of which contain 20-60 seeds or beans. The seeds are used as the main ingredient in chocolate.

4. Jacob ___, South African president beginning in 2009 : ZUMA
Jacob Zuma is the current President of South Africa, and also the President of the African National Congress (ANC). Zuma is a polygamist with six wives and twenty children.

5. Member of the Ennead : ISIS
The Ennead is a group of nine gods in Egyptian mythology. The Ennead were all in the same family, all descendents of the god Atum.

Isis was the ancient Egyptian goddess of fertility, as well as the protector of the dead and the goddess of children.

6. Attic character : ETA
Eta is the seventh letter of the Greek alphabet, and is a forerunner of our Latin character “H”.

Greece is divided into 13 peripheries, regional administrative divisions. The capital of Greece, Athens, is located in the periphery of Attica.

7. Movement from Cuba? : RUMBA
The rumba is a Cuban dance, with influences brought by African slaves and Spanish colonists. The name “rumba” comes from “rumbo”, the Spanish word for “party, spree”.

15. It’s known for its start-ups : SILICON VALLEY
The Santa Clara Valley, just a few miles from me at the south of San Francisco Bay, is better known as “Silicon Valley”. The term “Silicon Valley” dates back to 1971 when it was apparently first used in a weekly trade newspaper called “Electronic News” in articles written by journalist Don Hoefler.

27. Albuterol alleviates it : ASTHMA
The drug Salbutamol is known in the US as albuterol. One of the more noted brand names for the drug is Ventolin. Salbutamol is mostly inhaled, as a treatment for the relief of asthma.

29. Like some Beanie Babies : TEENIE
There were originally just nine Beanie Babies when Ty Warner introduced the stuffed animal in 1993. In the late nineties the toy became a real fad, largely due to innovative marketing techniques. For example, there was no mass marketing with constant TV ads, and the production volume was limited pushing the line into the realm of collectibles. Beanie Baby models were also “retired” on a regular basis, fueling a “must have” behavior in the market.

33. Groove on an arrow : NOCK
The nock is the slot that is cut into the end of an arrow into which the string is placed as the bow is drawn.

35. Pie-baking giant : DOMINO’S
Domino’s Pizza started out as DomiNick’s, a pizza store in Ypsilanti, Michigan. The store was purchased by Dominic’s founder Tom Monaghan in 1960, along with his brother. Tom bought out his brother a few months later, for the price of a used VW! The store was renamed Domino’s Pizza in 1965, and two years later the first franchise store was opened. There are now over 8,000 stores worldwide, including one in Tallaght in Ireland, the town where I lived for many years in my youth. That Tallaght store became the first Domino’s outlet in the world to hit a turnover of $3 million a year. We Irish obviously have terrible taste when it comes to pizza …

40. Antares or Proxima Centauri : M-STAR
Antares is the brightest star in the constellation Scorpio. The name “Antares” comes from “anti-Ares” meaning “anti-Mars”. The star has a reddish hue that resembles the planet Mars.

Proxima Centauri is a mere 4.2 light years away from the Earth, making it the second nearest star to our planet (the Sun, of course, is nearer). The name comes from “proxima” meaning “nearest to” and Centauri from the constellation Centaurus to which the star belongs.

“The Love Song of J. Alfred Prufrock” is a very famous poem by T. S. Eliot, first published in 1915. The rather odd name of “Prufrock” seems to have just come to Eliot, although there was a Prufrock-Littau Company in St. Louis when he lived there.

45. Roman Demeter : CERES
In Greek mythology, Demeter if the goddess of the harvest. Her Roman equivalent is Ceres.

47. Neckline? : FRET
A fret is a metal strip embedded in the neck of a stringed instrument, like a guitar perhaps. The fingers press on the frets, shortening a string and hence changing the note played. The note increases by one semitone as a finger shortens a string by one fret.

49. Baby sound : MEWL
To mewl is to cry weakly, like a baby, with the word being somewhat imitative.

51. Verano, across the Pyrenees : ETE
Our word “summer” is “verano” in Spanish, and “été” in French.

53. Yours, in Turin : TUO
Turin (“Torino” in Italian) is a major city in the north of Italy that sits on the Po River. Back in 1861, when the Kingdom of Italy was formed, Turin was chosen as the first capital of the country .