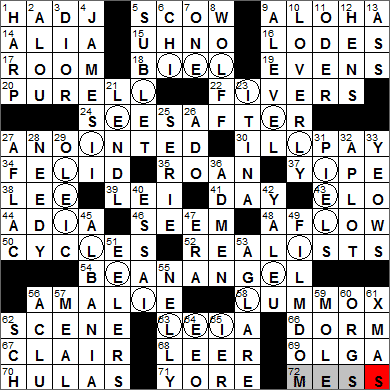 CROSSWORD SETTER: Paula Gamache
THEME: May Day Lei Day … May 1 is Lei Day, and so we have a ring of LEI words arranged in a circle in the middle of the grid, defined by the circled letters:

Today’s Wiki-est, Amazonian Googlies
Across
1. Trek ending in Mecca HADJ
“Haji” is the term used for someone who has made a pilgrimage to Mecca, and the term is sometimes also used as a form of address for such a person. The journey itself goes by the name “haj” or “hadj”.

5. Boat with a flat bottom SCOW
A scow is a flat-bottomed boat with squared-off ends that’s often used for transportation, usually pushed or pulled by a barge. Often a scow can be seen carrying junk or garbage.

9. Word heard on 39-/41-Across ALOHA
The Hawaiian word “Aloha” has many meanings in English: affection, love, peace, compassion and mercy. More recently “aloha” has come to mean “hello” and “goodbye”, but only since the mid-1800s.

16. Metallic veins LODES
A lode is metal ore deposit that’s found between two layers of rock or in a fissure.

20. Hand sanitizer brand PURELL
Purell is a hand sanitizer that uses ethanol as the active ingredient. In fact, Purell contains over 60% ethanol, and there have been stories about the sanitizer being ingested to get at the alcohol, even though the manufacturer deliberately adds a bitter-tasting ingredient to scare off potential drinkers.

22. Halves of sawbucks FIVERS
“Sawbuck” is slang for a ten dollar bill. The term was applied to the bill as the Roman numeral X (ten) resembles the end of sawhorse.

34. Member of the cat family FELID
Cats belong to the biological family Felidae, and so are called felids. Felids fall into two subfamilies: Pantherinae (e.g. tiger and lion) and Felinae (e.g. cougar and domestic cat).

35. Coat color ROAN
A roan horse has an even mixture of white and colored hairs on the body with the head, lower legs, mane and tail having a more solid color.

38. Gray head? LEE
Robert E. Lee is of course renowned as a southern officer in the Civil War. Lee was a somewhat reluctant participant in the war in that he opposed the secession of his home state of Virginia from the Union. At the beginning of the war, President Lincoln invited Lee to take command of the whole Union Army but he declined, choosing instead to stay loyal to his home state.

39. With 41-Across, annual May 1 celebration LEI
41. See 39-Across DAY
What’s known as May Day around the world is also called Lei Day in Hawaii. Lei Day started in the twenties and is a celebration of native Hawaiian culture.

43. “Do Ya” grp. ELO
ELO of course stands for the Electric Light Orchestra, a symphonic rock group from the north of England. ELO’s manager was Don Arden, father of Sharon Osbourne (wife of Ozzy). “Ole ELO” is a compilation album the band released in 1976.

44. 1998 Sarah McLachlan hit ADIA
Apparently the song “Adia”, co-written by Sarah McLachlan, was intended as an apology to her best friend … for stealing her ex-boyfriend and then marrying him!

58. Clodhopper LUMMOX
The word “lummox” comes from East Anglian slang (northeast of London). The term is probably a contraction of “lumbering ox”.

63. “Star Wars” sister LEIA
Princess Leia is Luke Skywalker’s sister in the original “Star Wars” trilogy and was played by Carrie Fisher. Carrie Fisher has stated that she hated the famous “cinnamon bun hairstyle” that she had to wear in the films, as she felt it made her face look too round. She also had to to sit for two hours every day just to get her hair styled. Two hours to get your hair done? It takes me just two seconds …

70. Performances on 39-/41-Across HULAS
Hula is the name of the Polynesian dance. The chant or song that the dance illustrates, that’s known as the mele.

Down
2. Baseball family name ALOU
Jesus Alou played major league baseball, as did his brothers Matty and Felipe, and as does Felipe’s son, Moises.

3. J’adore fragrance maker DIOR
Christian Dior was a French fashion designer. As WWII approached, Dior was called up by the French military, imposing a temporary halt to his career in fashion. He left the army in 1942 and for the duration of the war designed clothes for wives of Nazi officers and French collaborators. After the war his designs became so popular that he helped reestablish Paris as the fashion center of the world.

4. King replaced by William and Mary JAMES II
King James II of England and Ireland was also King James VII of Scotland. James II ascended to the throne on the death of his brother Charles II. James was the last Roman Catholic monarch to rule over England, Scotland and Ireland. It was his religion that led to his fall from the throne when was forced to flee from England in 1688. James was replaced by his Protestant daughter and her husband, who ruled together as Mary II and William III (aka William II of Scotland).

6. Feng shui “energy” CHI
Feng shui is the ancient Chinese tradition of arranging objects, buildings and other structures in a manner that is said to improve the lives of the individuals living in or using the space. “Feng shui” translates as “wind-water”, a reference to the belief that positive and negative life forces ride the wind and scatter, but are retained when they encounter water.

8. Author Tobias WOLFF
Tobias Wolff is an author from Birmingham, Alabama. Noted for his memoirs, Wolff’s most famous work is “This Boy’s Life”, which was adapted into a movie starring Leonardo DiCaprio and Robert De Niro.

9. British academic exam A-LEVEL
The UK’s education system was reformed in the fifties with the introduction of the General Certificate of Education (GCE). There were two levels of certification that could be awarded in most subjects. The Ordinary Level (O-Level) was a much less rigorous standard of examination than the Advanced Level (A-Level).

10. “Wouldn’t It Be ___?” (“My Fair Lady” song) LOVERLY
“My Fair Lady” is the Lerner and Loewe musical that is based on the George Bernard Shaw play “Pygmalion”.

11. River to the Baltic ODER
The River Oder (Odra in Czech/Polish) rises in the Czech Republic and forms just over a hundred miles of the border between Germany and Poland, before eventually emptying into the Baltic Sea.

21. Tennis great Ivan LENDL
Ivan Lendl is a former professional tennis player from Czechoslovakia. Lendl appeared in eight consecutive US Open finals in the eighties, a record that stands to this day.

23. Turner autobiography I, TINA
“I, Tina” is the 1986 autobiography of Tina Turner. The book was so successful it was adapted into a movie called “What’s Love Got to Do With It?” The film version was released in 1993 and starring Angela Bassett as Tina Turner.

Tina Turner is actually a stage name used by Anna Mae Bullock, the “Queen of Rock ‘n’ Roll”. Turner has always loved Europe and moved there in the eighties. She now splits her time between her homes in England, France and Switzerland.

27. Company with a duck in its logo AFLAC
In 1999 Aflac was huge in the world of insurance but it wasn’t a household name, so a New York advertising agency was given the task of making the Aflac brand more memorable. One of the agency’s art directors, while walking around Central Park one lunchtime, heard a duck quacking and in his mind linked it with “Aflac”, and that duck has been “Aflacking” ever since …

29. Kind of acid used in making soap OLEIC
Oleic Acid is a fatty acid, found in many animal and plants sources, but most notably in olives. As such, “Oleic” means “derived from the olive”.

31. Beer brand owned by Pabst PIELS
The Piels Brewery in Brooklyn was founded by the three Piels brothers back in 1883. It must have been a great place to work, because Piels employees were apparently guaranteed cold beer on tap 24 hours a day by virtue of their union contract.

40. Montaigne work ESSAI
Michel de Montaigne was a prominent writer of the French Renaissance, and is noted for making popular the essay (“essai” in French”) as a legitimate genre of literature.

42. Bulldog’s place, in brief YALE U
The Yale Bulldogs are the athletic teams of Yale University. The Yale school mascot is “Handsome Dan”, the Yale bulldog.

45. Land on the Adriatic ALBANIA
The Republic of Albania is a country in the Balkans in southeastern Europe. Albania was made a communist state after WWII but became independent again with the collapse of the Soviet Union in 1990.

47. Pitching stat ERA
The pitching stat earned run average (ERA) measures how many runs a pitcher tends to give up per nine innings.

56. Free speech supporter: Abbr. ACLU
The American Civil Liberties Union (ACLU) has its roots in the First World War when it was founded to provide legal advice and support to conscientious objectors.

64. Want ad inits. EEO
Equal Employment Opportunity (EEO) is a term that has been around since 1964 when the Equal Employment Commission was set up by the Civil Rights Act.