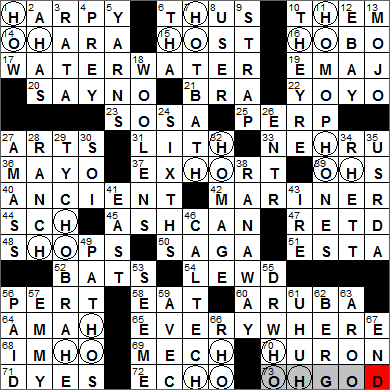 CROSSWORD SETTER: Jeff Chen
THEME: H2O … the circled letters in today’s grid are water molecules (HOH … H2O), so we have “water, water everywhere”, like in the poem “The Rime of the Ancient Mariner” by Coleridge:

Today’s Wiki-est, Amazonian Googlies
Across
1. Scolding, nagging sort HARPY
A harpy is a shrewish woman or a predatory person. The term comes from Greek mythology in which a harpy was a winged spirit noted for stealing food from a king called Phineus. Phineus angered the god Zeus and so was punished by being exiled to an island with a buffet of food that he could never eat. Every time he tried to eat, harpies would arrive and steal the food

14. John who wrote “Appointment in Samarra” O’HARA
“Appointment in Samarra” was John O’Hara’s first novel, published in 1934. Samarra is a city north of Baghdad in Iraq, although the story itself takes place in a fictional town in Pennsylvania. The novel deals with the last three days in the life of Julian English, describing how he destroys himself with a series compulsive acts leading up to his suicide. This one doesn’t qualify as light reading for the plane …

16. Vagrant HOBO
No one seems to know for sure how the term “hobo” originated, although there are lots of colorful theories. My favorite is that “hobo” comes from the first letters in the words “ho-meward bo-und”, but it doesn’t seem very plausible. A kind blog reader tells me that according to Click and Clack from PBS’s “Car Talk” (a great source!), “hobo” comes from “hoe boy”. Hoe boys were young men with hoes looking for work after the Civil War. Hobos differed from “tramps” and “bums”, in that “bums” refused to work, “tramps” worked when they had to, while “hobos” traveled in search of work.

19. Key of Haydn’s Symphony No. 12 or 29 E MAJ
Josef Haydn was an Austrian composer, often called the “Father of the Symphony” due to his prolific output of symphonies that helped define the form. Haydn was also the father figure among “the big three” composers of the Classical Period: Haydn, Mozart and Beethoven. Hayden was a good friend to Mozart, and a teacher of Beethoven.

21. Word after sports or training BRA
The word “brassière” is of course French in origin, but it isn’t the word the French use for a “bra”. In France what we call a bra is known as a “soutien-gorge”, translating to “held under the neck”. The word “brassière” is indeed used in France but there it describes a baby’s undershirt, a lifebelt or a harness. “Brassière” comes from the Old French word for an “arm protector” in a military uniform (“bras” is the French for “arm”). Later “brassière” came to mean “breastplate” and from there the word was used for a type of woman’s corset. The word jumped into English around 1900.

23. Seven-time All-Star Sammy SOSA
Sammy Sosa was right in the public eye in 1998 when he and Mark McGwire were vying to be the first to surpass the home run record held by Roger Maris. McGwire fell out of public favor due to stories of steroid abuse (stories which he later admitted were true) while Sosa fell out of favor when he was found to be using a corked bat in a 2003 game.

31. Latvia neighbor: Abbr. LITH
The nation of Lithuania is a former Soviet Socialist Republic sitting on the Baltic Sea in Northern Europe.

33. Contemporary of Gandhi NEHRU
Jawaharlal Nehru was the very first prime minister of India, serving from 1947-64. Nehru was basically the heir to his mentor, Mahatma Gandhi. Nehru’s only daughter, Indira, also became prime minister (known as Indira Gandhi, though she was no relation to Mahatma).

36. Hellmann’s product, informally MAYO
Mayonnaise originated in the town of Mahon in Menorca, a Mediterranean island belonging to Spain. The Spanish called the sauce “salsa mahonesa” after the town, and this morphed into the French word “mayonnaise” that we use in English today.

39. Quaker cereal brand OH’S
There used to be two varieties of Oh’s made by Quaker Oats Company. One was Honey Nut Oh’s, later known as Crunchy Nut Oh’s, but it was phased out. The second type was called Crunchy Graham Oh’s, and is still available today as Honey Graham Oh’s.

40. With 42-Across, subject of the poem that contains the line 17-/65-Across ANCIENT
42. See 40-Across MARINER
17. See 40-/42-Across WATER, WATER
65. See 40-/42-Across EVERYWHERE
“The Rime of the Ancient Mariner” is an epic poem by Samuel Taylor Coleridge first published in 1798. The publication of “The Rime of the Ancient Mariner” is said to mark the beginning of the Romantic period of British literature. Perhaps the lines most often quoted from the poem are:

45. Depth charge, in slang ASHCAN
Depth charges, especially older ones used during WWII, are metallic cylindrical devices resembling ashcans, and so they are known familiarly as “ashcans”.

51. It is, in Ibiza ESTA
The Pine Islands is an autonomous community of Spain in the Mediterranean with two main islands, Ibiza and Formentera. Ibiza has for some decades been a pretty wild tourist destination for European tourists as it is noted for its frantic nightlife, although recently attempts have been made to calm things down and develop a more family-oriented vacation destination. Formentera is a less accessible island and is a quieter spot that is renowned for its nude beaches.

60. One of the ABC islands ARUBA
Aruba is one of the so-called ABC Islands. The ABC Islands is the nickname given to the three westernmost islands of the Leeward Antilles in the Caribbean. The nickname comes from the first letters of the island names: Aruba, Bonaire and Curaçao. All three of the ABC Islands are part of the Kingdom of the Netherlands.

64. Eastern nurse AMAH
“Amah” is an interesting word in that we associate it so much with Asian culture and yet it actually comes from the Portuguese “ama” meaning “nurse”. Ama was imported into English in the days of the British Raj in India when a wet-nurse became known as an amah.

70. Tribe with a lake named after it HURON
Lake Huron takes its name from the Huron Native American people that lived by its shores. Early French explorers often called the lake “La Mer Douce”, meaning “the freshwater sea”.

11. Read and blew, for red and blue HOMOPHONES
Homophones are words that are pronounced the same but have different meanings and possibly different spellings.

The character of Austin Powers was created by the actor who plays him, Mike Myers. Apparently Myers came up with the idea for Powers while listening to the Burt Bacharach song “The Look of Love”.

24. Trivial Pursuit wedges, e.g. SIXTHS
Trivial Pursuit was invented in 1979 by two Canadians from Montreal. The pair decided to come up with their own game after they discovered that there were pieces missing from the game of Scrabble that they wanted to play. There was a full blown launch of a commercial version of the game in 1982. In 2008, Hasbro bought the complete rights to Trivial Pursuit, for US$80 million! On a personal note, I met my lovely wife over a game of Trivial Pursuit …

26. ___’acte ENTR
The term entr’acte comes to us from French, and is the interval between two acts (“entre” deux “actes”) of a theatrical performance. It often describes some entertainment provided during that interval.

28. Dressing choice RANCH
Ranch dressing has been the best selling salad dressing in the country since 1992. The recipe was developed by Steve Henson who introduced it in the fifties to guests on his dude ranch, Hidden Valley Ranch in Northern California. His ranch dressing became so popular that he opened a factory to produce packets of ranch seasoning that could be mixed with mayonnaise and buttermilk. Henson sold the brand for $8 million in 1972.

29. Astronomer who coined the word “nova” TYCHO BRAHE
Tycho Brahe was an astronomer and contemporary of Galileo. Brahe lost his nose in a duel, and wore a replacement made of either silver or gold that was pasted onto his face!

41. Bridge position EAST
The four people playing a game of bridge are positioned around a table at seats called north, east, south and west.

46. West Coast engineering institution, informally CALTECH
Caltech is more properly known as the California Institute of Technology, and is a private research-oriented school in Pasadena. One of Caltech’s responsibilities is the management and operation of NASA’s Jet Propulsion Laboratory. If you watch “The Big Bang Theory” on television like me, you might know that the four lead characters all work at Caltech.

55. BBC sci-fi show DR WHO
The iconic science-fiction television show “Doctor Who” was first aired in 1963, and relaunched in 2005 by the BBC. The relaunched series is produced in-house by the BBC in Cardiff in Wales, the location that is the setting of the successful “Doctor Who” spin-off called “Torchwood”. The new show is about the Cardiff branch of the Torchwood Institute which investigates incidents involving extraterrestrials.

57. Cousin of a Golden Globe EMMY
The Emmy Awards are the television equivalent of the Oscars in the world of film, the Grammy Awards in music and the Tony Awards for the stage. Emmy Awards are presented throughout the year, depending on the sector of television being honored. The most famous of these ceremonies are the Primetime Emmy Awards and the Daytime Emmy Awards. The distinctive name of “Emmy” is a softened version of the word “immy”, the nickname given to the video camera tubes found in old television cameras.

The first Golden Globe Awards ceremony was held in 1944 to honor the best in filmmaking. The award was created by the Hollywood Foreign Press Association, which had been formed the year before by a group of writers in Los Angeles. One of the most famous of the Golden Globes is the Cecil B. DeMille Award.

62. Arctic Ocean sighting BERG
An iceberg is a large piece of freshwater ice that is floating freely after having broken off from a glacier or ice shelf. Out use of “iceberg” comes from the Dutch word for the same phenomenon “ijsberg”, which translates literally as “ice mountain”.

63. Suffix with buck -AROO
The American English word “buckaroo” comes from “vaquero”, the Spanish for cowboy.

66. Sigma preceder RHO
Rho is the Greek letter that looks just like our Roman letter “p”.