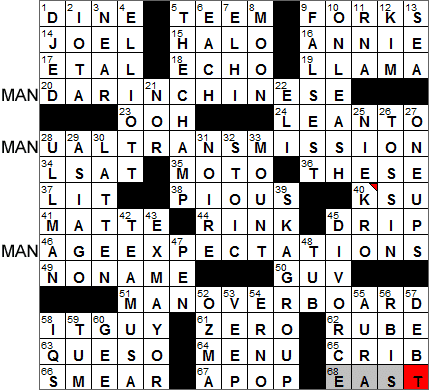 CROSSWORD SETTER: Brendan Emmett Quigley
THEME: Left-Wing Men … today’s themed answers each have a MAN OVERBOARD, the word “MAN” OVER on the left side of the BOARD/grid:

20A. Language that gave us “kowtow” : (MAN)DARIN CHINESE
28A. Clutch performer? : (MAN)UAL TRANSMISSION
46A. Discuss reasonable outcomes upfront : (MAN)AGE EXPECTATIONS
51A. Emergency shout … or a possible title for this puzzle : MAN OVERBOARD!

Today’s Wiki-est, Amazonian Googlies
Across
14. Spingarn of the N.A.A.C.P.’s Spingarn Medal : JOEL
The National Association for the Advancement of Colored People (NAACP) awards the Spingarn Medal every year, to honor outstanding achievement by an African American. The award was created in 1914 and is named for Joel Elias Spingarn, the NAACP’s first Chairman of the Board.

16. Broadway musical that opens with “Maybe” : ANNIE
Maybe “Maybe” isn’t the best-known of all the songs in the musical “Annie”, but it is the one that is sung most often during the show. “Maybe” opens the first act and is reprised at the end of the same act. It is reprised again at the opening of the second act, and once more near the end of the show. The big hit from “Annie” is “Tomorrow”.

19. Mammal that hums to its young : LLAMA
Many female mammals lick off their newborn. That’s not an option for llamas as their tongues only reach out of their mouths about half an inch. Instead llama dams nuzzle their young and hum to them.

20. Language that gave us “kowtow” : (MAN)DARIN CHINESE
To kowtow is to show servile deference. “Kowtow” comes from the Chinese “k’o-t’ou” which is the name for the custom of kneeling and touching the forehead to the ground in a gesture of respect. The Chinese term literally translates as “knock the head”.

Mandarin Chinese is a group of dialects that are spoken across northern and southwestern China. If Mandarin is considered as one language, then it has more native speakers than any other language on the planet.

34. Kaplan course subj. : LSAT
Kaplan Inc. was founded in 1938 by Stanley Kaplan, who started out tutoring students for the New York State Regents Exam in the basement of his parents’ home in Brooklyn. He opened up locations for tuition around the country, and in 1984 sold the company to the Washington Post. Revenue for Kaplan was over 2½ billion dollars in 2009.

35. “Right You Are, Mr. ___” (1957 novel) : MOTO
The mysterious Mr. Moto is a Japanese secret agent who appears in six novels by American author, John P. Marquand. Mr. Moto was famously played by Peter Lorre in a series of eight films released in the 1930s.

40. The Wildcats of the N.C.A.A. : KSU
The athletic teams of Kansas State University (KSU) are called the Wildcats. The Wildcats official “colors” are just one, Royal Purple. There are very few college teams with just one official color. As well as KSU there is Syracuse (Orange) and Harvard (Crimson).

50. Gent, in Britain : GUV
“Guv” is an informal word replacing “governor”, used in the UK. It is usually a friendly address to a man, sort of like our “Mac” or “Dad”.

58. One providing assistance after a crash : IT GUY
After a computer crash, we might call the IT guy.

62. Hayseed : RUBE
A “rube” is person lacking sophistication, often described as “a country bumpkin”. The term derives from the masculine name “Reuben”, which was considered back in the early 1800s to be a typical name used in rural areas.

A gordita is a Mexican cake or pie. It resembles a pasty, and is usually filled with cheese and/or meat. “Gordita” is Spanish for “little fat one”.

65. It’s got all the answers : CRIB
A crib is a plagiarism, most commonly the copying of an answer in an examination.

68. ___ Anglia : EAST
East Anglia is a region in on the east coast of England, located to the immediate northeast of London. East Anglia is home to the famous university city of Cambridge.

Down
1. Entertained at a reception, maybe : DJED
The world’s first radio disk jockey was one Ray Newby of Stockton, California who made his debut broadcast in 1909, would you believe? When he was 16 years old and a student, Newby started to play his records on a primitive radio located in the Herrold College of Engineering and Wireless in San Jose. The records played back then were mostly recordings of Enrico Caruso.

2. Ninth in a series : IOTA
Iota is the ninth letter in the Greek alphabet. We use the word “iota” to portray something very small as it is the smallest of all Greek letters.

4. Canadian P.M. Pierre Trudeau’s middle name : ELLIOTT
Pierre Trudeau was Prime Minister of Canada from 1968 to 1979, and again from 1980 to 1984. Trudeau resigned in 1984 after a period of reflection that he referred to as a “long walk in the snow”. That same phrase is still used by politicians to mean “stepping down from office”.

5. 1931 film for which Wallace Beery won Best Actor : THE CHAMP
“The Champ” is a 1931 film about the life of an alcoholic boxer trying to put his life back together. The actor Wallace Beery plays the title role, for which he won the Academy Award for Best Actor.

7. All the way through 12th grade, informally : ELHI
“Elhi” is an informal word used to describe anything related to schooling from grades 1 through 12, i.e. elementary through high school.

8. It goes through many phases : MOON
The phases of the moon have been given the following names, in order:

11. Biology subject : RNA
Ribonucleic Acid (RNA) is an essential catalyst in the manufacture of proteins in the body. The genetic code in DNA determines the sequence of amino acids that make up each protein. That sequence is read in DNA by messenger RNA, and amino acids are delivered for protein manufacture in the correct sequence by what is called transfer RNA. The amino acids are then formed into proteins by ribosomal RNA.

12. One of the Kardashians : KIM
Kim Kardashian is a socialite and television personality. She was introduced into society by her friend, Paris Hilton. Kardashian’s name first hit the headlines when a homemade sex tape made by her and singer Ray J was leaked.

13. Setting for much of Homer’s “Odyssey” : SEA
“The Odyssey” is one of two epic poems from ancient Greece that is attributed to Homer. “The Odyssey” is largely a sequel to Homer’s other epic, “The Iliad”. “The Odyssey” centers on the heroic figure, Odysseus, and his adventures on his journey home to Greece following the fall of Troy.

21. Scand. land : NOR
Norway has been ranked as the country in the world with the highest standard of living almost every year since 2001. Norway is rich in natural resources and has a relatively low population. The people benefit from a comprehensive social security system, subsidized higher education for all citizens and universal health care.

22. Skull and Bones member : ELI
Eli is the nickname for a graduate of Yale University, a term used in honor of the Yale benefactor Elihu Yale.

Skull and Bones is a secret society at Yale University, founded in 1832. The society is well funded, and even owns a 40-acre island in Upstate New York that members and alumni use as a retreat. Noted members of Skull and Bones included William F. Buckley, Jr., President Bush (both father and son) and Senator John Kerry. And President William Howard Taft was the son of one of the society’s founders.

25. Baseball Hall-of-Famer nicknamed Knucksie : NIEKRO
Phil Niekro is a former baseball pitcher. Niekro is famous for the knuckleballs that he threw, and so he earned the nickname “Knucksie”.

29. Often-grated cheese : ASIAGO
Asiago is a crumbly cheese, named after the region in northeastern Italy from where it originates.

30. Thin sheet metal : LATTEN
Latten is brass or a brass-like alloy that is hammered into a thin layer used for decoration, especially on vessels used by a church.

31. Bête ___ : NOIRE
“Bête noire” translates from French as “the black beast” and is used in English for something or someone that is disliked.

39. The English Beat, for one : SKA GROUP
Ska originated in Jamaica in the late fifties and was the precursor to reggae music. No one has a really definitive etymology of the term “ska”, but it is likely to be imitative of some sound.

The Beat is a ska revival band founded in Birmingham, England in 1978. The bad is known as the English Beat here in North America, and as the British Beat down under in Australia.

43. Clint Eastwood, for one : EX-MAYOR
The actor and director Clint Eastwood is a native of San Francisco, California. As many of us perhaps remember, Eastwood’s big break was playing the supporting role of Rowdy Yates in the TV show “Rawhide” in the late fifties and early sixties. He then became the face of the spaghetti western genre of movie in the sixties, most notably in the classic “The Good, the Bad and the Ugly”. In later years Eastwood has branched out into directing and producing with remarkable success. And of course in the late eighties he also served as mayor of his hometown, Carmel-by-the-Sea.

48. Where Archimedes had his “Eureka!” moment : TUB
Eureka translates from Greek as “I have found it”. The word is usually associated with Archimedes, uttered as he stepped into his bath one day. His discovery was that the volume of water that was displaced was equal to that of the object (presumably his foot) that had been submerged. He used this fact to determine the volume of a crown, something he needed in order to determine if it was made of pure gold or was a forgery.

52. L. Frank Baum princess : OZMA
L. Frank Baum wrote a whole series of books about the Land of Oz, and Princess Ozma appears in all of them except the one that’s most famous, “The Wonderful Wizard of Oz”.

L. Frank Baum (the “L” is for Lyman) was of course famous for writing “The Wonderful Wizard of Oz”. Writing early in teh 20th century, Baum actually described in his books things that had yet to be invented, like television, laptop computers and wireless telephones.

56. Babe Ruth’s 2,220, for short : RBIS
Jack Dunn was the owner/manager of the Baltimore Orioles back in 1913, when he signed on George Herman Ruth as a pitcher. The other players called Ruth “Jack’s newest babe”, and the name “Babe” stuck.

58. Thinking figs. : IQS
Although it is correct these days to say that the abbreviation IQ stands for “intelligence quotient”, the term was actually coined by German psychologist William Stern, so it actually is an abbreviation for the German “Intelligenz-Quotient”.

59. Rum ___ Tugger (“Cats” cat) : TUM
Rum Tum Tugger is one of the characters in T. S. Eliot’s “Old Possum’s Book of Practical Cats”. Rum Tum Tugger also appears in the Andrew Lloyd Webber’s “Cats”, the musical based on Eliot’s book. In the musical, Rum Tum Tugger’s persona was written as a homage to Mick Jagger of Rolling Stones. So, the character tends to strut around the stage a lot.