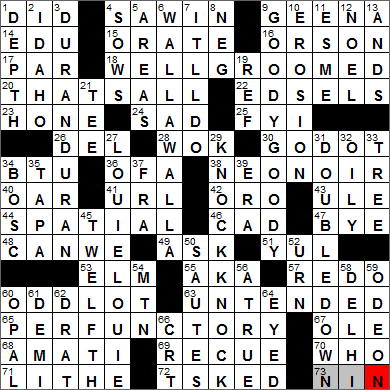 CROSSWORD SETTER: Doug Peterson
THEME: D-Down Answers … each of today’s themed answers is to down clue, and is comprised of a repeated word:

Today’s Wiki-est, Amazonian Googlies
Across
9. Davis of “A League of Their Own” : GEENA
As well as being a successful Hollywood actress, Geena Davis is an accomplished archer and came close to qualifying for the US archery team for the 2000 Summer Olympics. Davis is also a member of American Mensa. She is quite the lady …

14. Academic e-mail address ender : EDU
The .edu domain was one of the seven first generic top-level domains specified. The complete original list is:

16. Director Welles : ORSON
Orson Welles is perhaps best-remembered in the world of film for his role in 1941’s “Citizen Kane”. In the world of radio, Welles is known for 1938’s famous broadcast of “The War of the Worlds”, a broadcast that convinced many listeners that the Earth was indeed being invaded by aliens.

17. Score between birdie and bogey : PAR
Apparently the term “birdie” originated in 1899 at the Atlantic City Country Club in Northfield, New Jersey. A golfer hit his second shot on a par four that stopped inches from the cup after hitting a bird in flight. The golfer tapped the ball in for one-under-par, and his golfing buddies labeled the second shot a “bird”. The golfers started to call one-under-par a birdie, and the term spread through the club, and from there around the world …

The term “Bogey” originated at the Great Yarmouth Golf Club in England in 1890, and was used to indicate a total round that was one over par (and not one over par on a particular hole, as it is today). The name Bogey came from a music hall song of the time “Here Comes the Bogey Man”. In the following years it became popular for players trying to stay at par to be “playing against Colonel Bogey”. Then, during WWI, the marching tune “Colonel Bogey” was written and named after the golfing term. If you don’t recognize the name of the tune, it’s the one that’s whistled by the soldiers marching in the great movie “The Bridge on the River Kwai”.

22. 1950s Ford failures : EDSELS
It was Henry Ford’s son Edsel who gave his name to the Edsel brand of automobile, a name that has become synonymous with “failure”.

26. Tierra ___ Fuego : DEL
Tierra del Fuego is an archipelago off the southern tip of South America and is the location of the famed Cape Horn. Tierra del Fuego was discovered by the Portuguese explorer Ferdinand Magellan. He saw native fires on land as he passed by and originally called the location “Land of Smoke” This was later changed to “Land of Fire”, or “Tierra del Fuego” in Spanish.

28. Pan in Chinese cookery : WOK
“Wok” is a Cantonese word, the name of the frying pan now used in many Asian cuisines.

30. “Waiting for ___” : GODOT
An Irishman I may be, but I have sat through so many Samuel Beckett plays (the Irish dramatist) and have yet to come away feeling satisfied that I spent my time well. Of course I am in the minority, as his play “Waiting for Godot” was once voted the most significant English language play of the 20th century. Maybe I will try again one day …

34. Air conditioner meas. : BTU
In the world of heating, ventilation and air conditioning (HVAC), the power of a heating or cooling unit can be measured in British Thermal Units (BTUs). This dated unit is the amount of energy required to heat a pound of water so that the water’s temperature increases by one degree Fahrenheit.

36. “The Tears ___ Clown” : OF A
“The Tears of a Clown” was the biggest hit for Smokey Robinson and the Miracles. The group had gotten together back in 1955 as the Matadors.

38. Modern film genre with dark themes : NEO-NOIR
A neo-noir film is a contemporary film that incorporates elements of the film noir style of the forties and fifties.

46. One a woman can’t trust : CAD
Our word “cad”, meaning “a person lacking in finer feelings”, is a shortening of the word “cadet”. “Cad” was first used for a servant, and then students at British universities used “cad” as a term for a boy from the local town. “Cad” took on its current meaning in the 1830s.

51. Oscar winner Brynner : YUL
Yul Brynner was a Russian-born actor. Brynner was well known for his great performances, but also for his shaved head and his deep rich voice. He first adopted the “hairstyle” while playing the King of Siam in the stage version of “The King and I”, and he stuck with it.

67. Spanish “huzzah!” : OLE!
“Huzzah” is a cheer, originally a sailor’s interjection, possibly accompanying the hoisting of a sail.

68. Prized violin : AMATI
The first of the Amati family to make violins was Andrea Amati, who lived in the 14th century. He was succeeded by his sons, Antonio and Girolamo. In turn, they were succeeded by Girolamo’s son, Nicolo. Nicolo had a few students who achieved fame making musical instruments as well. One was his own son, Girolamo, and another was the famed Antonio Stradivari.

70. First of the five W’s : WHO?
The Five Ws (or “Five Ws and one H”) is a journalistic concept used for gathering information. For a story to be complete, six questions need to be answered:

73. Writer Anaïs : NIN
Anaïs Nin was a French author, famous for her journals that she wrote for over sixty years from the age of 11 right up to her death. Nin also wrote highly regarded erotica and cited D. H. Lawrence as someone from whom she drew inspiration. Nin was married to banker and artist Hugh Parker Guiler in 1923. Decades later in 1955, Nin married former actor Rupert Pole, even though she was still married to Guiler. Nin and Pole had their marriage annulled in 1966, but just for legal reasons, and they continued to live together as husband and wife until Nin passed away in 1977.

Down
2. Boise’s state : IDAHO
Boise, Idaho is the largest metropolitan area in the state by far. There are a number of stories pertaining to the etymology of the name “Boise”. One is that French trappers named the tree-lined river that ran through the area “la rivière boisée”, meaning “the wooded river”.

3. *Band with the 1983 hit “Hungry Like the Wolf” : DURAN DURAN
Duran Duran is a New Wave band from Birmingham in England. Duran Duran’s success was partially driven by some well-received MTV music videos in the 1980s. The band also worked hard on their image and paid a lot of money for very fashionable clothes in which they performed. As a result, one of Duran Duran’s nicknames is “the prettiest boys in rock”.

6. *Washington city near the Oregon border : WALLA WALLA
The Walla Walla Valley is a wine-growing region in Washington that extends into the northeast of Oregon. The valley is named after the Walla Walla people who lived in the area.

11. Salinger title girl : ESME
J. D. Salinger wrote a short story called “For Esme – with Love and Squalor”, originally published in “The New Yorker” in 1950. It is a story about a young English girl called Esme and an American soldier, and is set in WWII.

J. D. Salinger was a very reclusive author, most famous for his novel “Catcher in the Rye”. Salinger fought in WWII after he was drafted into the US Army. He saw action on Utah Beach on D-Day, and in the Battle of the Bulge. He also spent a lot of time interrogating prisoners due to his knowledge of French and German, and he was one of the first Americans to go into a liberated concentration camp. He later spent time in hospital suffering from what was then called combat stress reaction, as he tried to deal with what he saw in the German camps.

12. Christmas song : NOEL
“Noël” is the French word for the Christmas season, ultimately coming from the Latin word for “birth” (natalis). Noel has come to be used as an alternative name for a Christmas carol.

27. *Hit song for the Kingsmen with famously unintelligible lyrics : LOUIE LOUIE
“Louie Louie” is a rock ‘n’ roll classic released in 1963 by the Kingsmen. A few months after the release, there was a complaint by a parent that the lyrics of “Louie Louie” were obscene. The FBI investigated this claim over a two-year period, and found no evidence of any obscenity. However, the obscenity claim does still pop up every now and then.

31. Blackjack player’s option … or a description of the answers to the starred clues? : DOUBLE DOWN
“Double down” is a tactic used in blackjack in which the player can choose to double his or her original bet in exchange for agreeing to stand after receiving exactly one more card.

34. Pear variety : BOSC
Bosc is a cultivar of the European Pear grown in the northwest of the United States. The Bosc is that pear with a skin the color of a potato, with a long neck. I always seem to use the potato as my point of reference. How Irish am I …?

35. Finger food at a fiesta : TAPA
“Tapa” is the Spanish for “lid”, and there is no clear rationale for why this word came to be used for an appetizer. There are lots of explanations cited, all of which seem to involve the temporary covering of one’s glass of wine with a plate or item of food to either preserve the wine or give one extra space at the table.

39. The Roaring Twenties, e.g. : ERA
The 1920s are often called the Roaring Twenties, a period of dynamic change across all aspects of life. Things were finally returning to normal after WWI, jazz became popular, some women “broke the mold” by becoming “flappers”, and Art Deco flourished. The whole decade came to a tragic end with the Wall Street Crash of 1929, followed by the Great Depression.

45. Last of a dozen : TWELFTH
Our word “dozen” is used for a group of twelve. We imported it into English from Old French. The modern French word for twelve is “douze”, and a dozen is “douzaine”.

50. Fries lightly : SAUTES
“Sauté” is of course a French word. The literal translation from the French is “jumped” or “bounced”, a reference to the tossing of food while cooking it in a frying pan.

54. Any of the Andes: Abbr. : MTN
The Andes is the longest continuous chain of mountains in the world, running right down the length of the west coast of South America for about 4,300 miles. The highest peak in the range is Mt. Aconcagua, at an elevation of 22,841 feet. Interestingly, the peak of Mt. Chimborazo in Ecuador is the furthest point on the Earth’s surface from the center of the planet. That’s because of the equatorial “bulge” around the Earth’s “waist”.

59. Old-time music hall : ODEON
In Ancient Greece an odeon was like a small theater, with “odeon” literally meaning “building for musical competition”. Odea were used in both Greece and Rome for entertainments such as musical shows and poetry readings.

60. Translucent gem : OPAL
An opal is often described as having a milky iridescence, known as “opalescence”.

61. Actress Moore of “G.I. Jane” : DEMI
G.I. Joe was the original “action figure”, the first toy to carry that description. G.I. Joe first hit the shelves in 1964. There have been a few movies based on the G.I. Joe figure, but, more famous than all of them I would say is the 1997 movie “G.I. Jane” starring Demi Moore in the title role. I think this movie had some potential, to be honest, but it really did not deliver at all.

66. Obsolescent PC monitor type : CRT
Cathode Ray Tube (CRT) … there aren’t many of them available in stores these days!