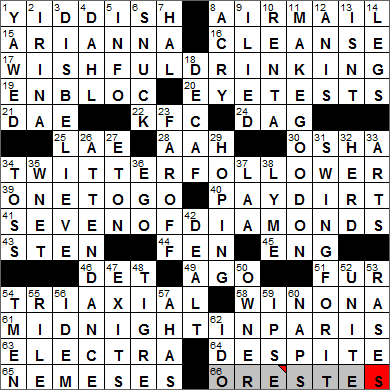 Today’s Wiki-est, Amazonian Googlies
Across
1. Singer’s tongue YIDDISH
I think the reference here might be to Isaac Bashevis Singer, the Jewish American author.

Isaac Bashevis Singer was a Jewish-American author from Poland who won the Nobel Prize in Literature in 1978. As well as being a much-respected author, Singer was a noted vegetarian, and featured the theme of vegetarianism in his some of his works. He was once asked if he had become a vegetarian for health reasons, to which he remarked “I did it for the health of the chicken”.

17. Autobiographical book by Carrie Fisher WISHFUL DRINKING
“Wishful Drinking” is a one-woman stage show featuring actress Carrie Fisher. The stage show was developed into Fisher’s 2008 autobiography with the same name. In the memoir, the actress discusses her addictions and bipolar disorder. She also reveals that she wishes she had turned down the offer to play Princess Leia in “Star Wars”.

21. Peace Nobelist Kim ___-jung DAE
Kim Dae-jung was the President of South Korea from 1998 to 2003. He had a policy of engagement with North Korea, and even even had an official meeting with Kim Jong-il in 2000 in Pyongyang. Although his approach, called the Sunshine Policy, did not appear to yield much success, his efforts earned him the Nobel Peace Prize in 2000.

22. Crispy Twister offerer KFC
The famous “Colonel” of Kentucky Fried Chicken fame was Harland Sanders, an entrepreneur from Henryville, Indiana. Although not really a “Colonel”, Sanders did indeed serve in the military. He enlisted in the Army as a private in 1906 at the age of 16, lying about his age. He spent the whole of his time in the Army as a soldier in Cuba. It was much later, in the 1930s, that Sanders went into the restaurant business making his specialty deep-fried chicken. By 1935 his reputation as a “character” had grown, so much so that Governor Ruby Laffoon of Kentucky gave Sanders the honorary title of “Kentucky Colonel”. Later in the fifties, Sanders developed his trademark look with the white suit, string tie, mustache and goatee. When Sanders was 65 however, his business failed and in stepped Dave Thomas, the founder of Wendy’s. Thomas simplified the Sanders menu, cutting it back from over a hundred items to just fried chicken and salads. That was enough to launch KFC into the fast food business. Sanders sold the US franchise in 1964 for just $2 million and moved to Canada to grow KFC north of the border. He died in 1980 and is buried in Louisville, Kentucky. The Colonel’s secret recipe of 11 herbs and spices is indeed a trade secret. Apparently there is only one copy of the recipe, a handwritten piece of paper, written in pencil and signed by Colonel Sanders. Since 2009, the piece of paper has been locked in a computerized vault surrounded with motion detectors and security cameras.

24. Peace Nobelist Hammarskjöld DAG
Dag Hammarskjold was the second secretary-general of the United Nations, right up until his death in a plane crash in Rhodesia in 1961. The crash was considered suspicious at the time as the bodyguards were found to have bullet wounds when they died, but this was put down to bullets exploding in the fire after the crash.

25. Papua New Guinea port in W.W. II news LAE
Lae is the second largest city in Papua New-Guinea (after the capital, Port Moresby). It was from the airport at Lae that Amelia Earhart departed in 1937, never to be seen again.

30. Dept. of Labor division OSHA
The Occupational Safety and Health Administration (OSHA) was created in 1970 during the Nixon administration. OSHA regulates workplaces in the private sector and regulates just one government agency, namely the US Postal Service.

34. Unit of online popularity TWITTER FOLLOWER
I have never tweeted in my life, and have no plans to do so. Twitter is a microblogging service that limits any post sent to just 140 characters. In a sense, it is similar to this blog. Here I send out a post once a day containing information that I think might be useful to folks (thank you for reading!). I don’t think I could send out much of interest using just 140 characters. I believe that many people who do tweet tend to send out messages like “I’m at dinner now. I am having sushi” and “There’s nothing on TV. I’m bored”. Nope, I don’t think so!

40. Nice thing to hit PAY DIRT
“To hit pay dirt” is to succeed, make a profit. The expression comes from the mining industry, when hitting pay dirt was finding the mother lode, as it were.

41. First card played in the game parliament SEVEN OF DIAMONDS
Sevens is a card game also called Parliament. Sevens is a bit like playing the game of solitaire competitively. Cards are laid down in consecutive order as in Solitaire, with the winner being the first person to lay down all of his or her cards.

51. Ermine, e.g. FUR
Ermine is another name for the stoat. The stoat has dark brown fur in the summer, and white fur in the winter. Sometimes the term “ermine” is reserved for the animal during the winter when the fur is white. Ermine skins have long been prized by royalty and are often used for white trim on ceremonial robes.

54. Kind of cable in TV production TRIAXIAL
Triaxial cable is a more refined version of coaxial cable, both of which are commonly used to transmit television signals.

58. Actress Ryder WINONA
The Hollywood actress Winona Ryder’s real name is Winona Horowitz. Ryder was born near the town of Winona in Minnesota, from which she got her name. Her success on the screen has garnered as much media attention as her life off the screen. The papers had a field day when she was arrested in 2001 on a shoplifting charge followed by a very public court appearance. Her engagement with Johnny Depp in the early nineties was another media frenzy. Depp had “Winona Forever” tattooed on his arm, which he had changed after the breakup to “Wino Forever”. A man with a sense of humor …

63. Mythological sister of 66-Across ELECTRA
Electra was a princess in Greek mythology, the daughter of Agamemnon. Electra had to mourn the death of her father who was murdered, and then the death of her mother, Clytemnestra, who was also murdered.

65. Formidable foes NEMESES
Nemesis was a Greek goddess, the goddess of retribution. Her role was to make pay those individuals who were either haughty or arrogant. In modern parlance, one’s nemesis is one’s sworn enemy, often someone who is the exact opposite in character but someone who still shares some important characteristics. A nemesis is often someone one cannot seem to beat in competition.

66. Mythological brother of 63-Across ORESTES
Orestes is a character appearing in Greek mythology, and is the subject of several Ancient Greek plays. In a story by Homer, Orestes kills his mother Clytemnestra. He does so in revenge as Clytemnestra had killed Agamemnon, who was her husband and father to Orestes. Agamemnon was killed by his wife for sacrificing his daughter Iphigenia in order to get favorable winds on a sea voyage. Heavy stuff …

Down
1. Went off course, as a ship YAWED
The word “yaw” means to deviate from the line of a course and is used mainly at sea. “Yaw” is derived from the Old Norse word “jaege” which means “to drive, chase”. As such, “yaw” is etymologically related to our word “yacht”.

7. 1968 space movie villain HAL
In Arthur C. Clarke’s “Space Odyssey” (famously adapted for the big screen as “2001: A Space Odyssey”) the computer system that went rogue was called HAL 9000, or simply “HAL”. HAL stands for Heuristically programmed ALgorithmic computer. In the French version of the film, HAL’s name was changed to CARL.

12. Spanish liqueur ANIS
Anis is a Spanish liqueur, equivalent to what’s called anisette in other countries (in France, for example). It has a licorice taste as it is produced by distilling the seeds of the anis plant. Like all anis-type drinks, it is usually mixed with water and turns a milky white color when the water is added.

18. Cappuccino choice DECAF
The Order of Friars Minor Capuchin is an order of Roman Catholic friars, an offshoot of the Franciscans. The order split from the Franciscans back in 1520, and were forced to go into hiding from church authorities. The new order was helped by the Camaldolese monks, and in recognition of their assistance, the breakaway monks adopted the Camaldolese hood, known as a capuccio. It is this “capuccio” that gave the order its name, and indeed ultimately gave the name to the Capuchin monkey. The cappuccino coffee is named for the coffee and white colored habits worn by Capuchin friars.

27. ___ blue (color named for a school) ETON
Eton blue is the school color that has been used by the Sports teams of Eton College in England since the early 1800s.

35. N.Y.C.’s PBS station WNET
WNET is a television station located in Newark, New Jersey. It is PBS’s station that covers New York City, as well as the rest of the tri-state area.

38. ___ disease LYME
Lyme disease is an infectious disease that is becoming more and more common. The condition takes its name from the town of Lyme, Connecticut where several cases were diagnosed in 1975. Humans catch the disease when bitten by infected ticks. If caught early enough, the disease is usually successfully treated with antibiotics.

53. Demolishes, in Devon RASES
Devon is a county in the southwest of England. The county town of Devon is Exeter, and the largest city in the county is Plymouth, the port from which the Mayflower Pilgrims departed.

54. Govt. gangbusters T-MEN
A T-man is a law-enforcement agent of the US Treasury (T is for Treasury).

56. Ditto, in footnotes IDEM
Idem is usually abbreviated as “id.” and is the Latin word for “the same”. In research papers idem is used in a list of references, in place of citations “already mentioned above”.

“Ditto” was originally used in Italian (from Tuscan dialect) to avoid repetition of the names of months in a series of dates. So “ditto” is just another wonderful import from that lovely land …