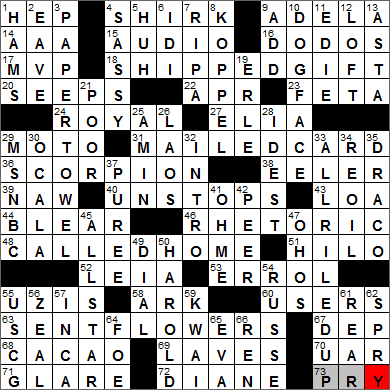 CROSSWORD SETTER: Bruce Venzke
THEME: Happy Mother’s Day … today’s themed answers are a checklist of things to do for Mother’s Day, and the diagonal of the grid, from top-left to bottom-right, spells out HAPPY MOTHER’S DAY:

Today’s Wiki-est, Amazonian Googlies
Across
1. Not square HEP
The slang term “hep” meaning “cool” has the same meaning as the later derivative term “hip”. The origins of “hep” seem unclear, but it was adopted by jazz musicians of the early 1900s.

9. “A Passage to India” woman ADELA
“A Passage to India” is a wonderful novel by E. M. Forster set in the days of the British Raj. There are two excellent adaptations for the screen that I would recommend. There’s a BBC television version from 1965 starring a wonderful cast including Virginia McKenna and Cyril Cusack. There is also an Oscar-winning movie version from 1984 with Alec Guinness and Peggy Ashcroft. Forster had first-hand knowledge of life during the Raj, having worked in India during the twenties.

23. Greek salad staple FETA
Feta is a Greek cheese made from sheep’s milk, or a mixture of sheep’s and goat’s milk. The cheese is salted and cured in a brine solution for several months before it is eaten.

27. Noted literary pseudonym ELIA
Charles Lamb published a famous collection of essays simply entitled “Essays of Elia”. Elia was actually a clerk and co-worker of Charles Lamb, whereas Lamb was the author.

36. Zodiac symbol SCORPION
Scorpio is a the eighth astrological sign of the Zodiac. In days of old, the planetary ruler of Scorpio was Mars, but since 1930 and the discovery of a new planet, Pluto has been the ruler. I wonder if the “demotion” of Pluto to a dwarf planet has made a difference?

38. Lamprey hunter EELER
Lampreys look like a cross between a fish and an eel.

43. Hawaii’s Mauna ___ LOA
Mauna Loa on the “big island” of Hawaii is the largest volcano on the planet (in terms of volume). The name “Mauna Loa” is Hawaiian for “Long Mountain”.

51. City SE of Honolulu HILO
Hilo is the largest settlement on the big island of Hawai’i, with a population of over 43,000 (that’s not very many!). I love the Big Island …

52. Princess who was captured by Jabba the Hutt LEIA
Jabba the Hutt is the big blob of an alien that appears in the “Star Wars” movie “The Return of the Jedi”. Jabba’s claim to fame is that he enslaved Princess Leia and kitted her out in that celebrated metal bikini.

53. Dashing Flynn ERROL
Errol Flynn was born 1909 in Tasmania, Australia where he was raised. In his twenties, Flynn lived in the UK where he pursued his acting career. Around the same time he starred in an Australian film “In the Wake of the Bounty” and then appeared in a British film “Murder at Monte Carlo”. It was in the latter film that he was noticed by Warner Brothers who brought him to America. Flynn’s non-American heritage shone through even while he was living the American dream in California. He regularly played cricket, along with his friend David Niven, in the Hollywood Cricket Club.

55. Pieces in a Mideast armory UZIS
The first Uzi submachine gun was designed in the late 1940s by Major Uziel Gal of the Israel Defense Forces who gave his name to the gun.

68. Chocolate base CACAO
Chocolate is made from the seeds of the Theobroma cacao tree. The seeds are very bitter and the traditional drink made with the seed was called “xocolatl” by the Aztecs, meaning “bitter water”. That’s how our “chocolate” got its name.

70. Old Mideast alliance, for short UAR
The UAR, United Arab Republic, was a union between Egypt and Syria made in 1958 and dissolved in 1961 when Syria pulled out of the arrangement.

72. “Cheers” role DIANE
Diane Chambers was one of the original lead characters in the sitcom “Cheers”. Diane was played by actress Shelley Long.

Down
1. Certain radio enthusiasts HAMS
Amateur radio enthusiasts were originally called ham operators by professional telegraph operators, and the term was intended to be insulting. It came from the similar term “ham actor”, describing a person who is less than effective on the stage. But amateur operators eventually embraced the moniker and so it stuck.

6. With 25-Down, 1979 exile IDI
(25. See 6-Down AMIN)
Idi Amin received most of his military training in the British armed forces, eventually achieving the highest rank possible for a Black African in the British Colonial Army in 1959, that of Warrant Officer. On his return to Uganda Amin joined his country’s military and quickly rose to the rank of Deputy Commander of the Army. During that time he was quite the athlete. He was a noted rugby player and swimmer, and for nine years held the Ugandan national light-heavyweight boxing title. By the early seventies, Amin was commander of all the armed forces of Uganda and in 1971 seized power in a military coup, displacing the country’s president Milton Obote. There followed seven years of brutal rule by Amin during which it is estimated that between 100,000 and 500,000 people were murdered. Amin was ousted from power in 1979 after a war with Tanzania, and fled to Libya where he stayed for a year. He then moved to Saudi Arabia, where he was financially supported by the Saudi Royal Family for the remainder of his life. Amin died in 2003.

7. “Hope & Faith” actress Kelly RIPA
When Kelly Ripa secured the co-host spot on morning television with Regis Philbin, she was still acting in “All My Children” in a role she had been playing for over ten years. After a year of holding down two jobs, she eventually gave up the acting job.

“Hope & Faith” is a sitcom that ran from 2003 to 2006, starring Faith Ford and Kelly Ripa as two sisters, one of whom was a soap opera star whose character had been killed off. One the show, Faith played Hope and Kelly played Faith. Very confusing …

8. Ted once of ABC news KOPPEL
The broadcast journalist Ted Koppel is most associated with his long run as anchor for the “Nightline” program on ABC. Koppel was actually born in England, to a Jewish family that had fled from Germany. He emigrated with his family to the US when he was 13 years old. Koppel is great friends with former Secretary of State Henry Kissinger who was a frequent guest on his television show.

9. Focusing problem, for short ADD
The “official” name for the condition we sometimes still refer to as “attention deficit disorder” (ADD) is “attention-deficit hyperactivity disorder” (ADHD).

The initials “G.I.” stand for “Government Issue” and not “General Infantry” as is often believed. GI was first used in the military to denote equipment made from Galvanized Iron and during WWI, incoming German shells were nicknamed “GI cans”. Soon after, the term GI came to be associated with “Government Issue” and eventually became an adjective to describe anything associated with the Army.

13. Terrier in whodunits ASTA
Asta is the wonderful little dog in the superb movie “The Thin Man” starring William Powell and Myrna Loy (as Nick and Nora Charles). In the original story by Dashiell Hammett, Asta was a female Schnauzer, but on screen Asta was played by a wire-haired fox terrier called “Skippy”. Skippy was also the dog in “Bringing up Baby” with Cary Grant and Katharine Hepburn, the one who kept stealing the dinosaur bone. Skippy retired in 1939, so Asta was played by other dogs in the remainder of “The Thin Man” films.

19. ___ Stanley Gardner ERLE
I must have read all of the Perry Mason books when I was in college. I think they kept me sane when I was facing the pressure of exams. Author Erle Stanley Gardner was himself a lawyer, although he didn’t get into the profession the easy way. Gardner went to law school, but got himself suspended after a month. So, he became a self-taught attorney and opened his own law office in Merced, California. Understandably, he gave up the law once his novels became successful.

26. Ho Chi Minh Trail locale LAOS
The Vietnam War’s Ho Chi Minh Trail wasn’t just one trail, but rather a whole maze of routes that ran from North Vietnam to South Vietnam and through the neighboring countries of Laos and Cambodia. Practically the entire trail was hidden from the air using natural and man-made camouflage that was constantly maintained.

32. Emcee’s delivery INTRO
“Emcee” come from “MC”, an abbreviation for the Master or Mistress of Ceremonies.

49. Lifebuoy competitor DIAL
Dial was the first antibacterial soap introduced in the US. It was given the name “Dial” as it was touted as offering “round-the-clock” protection against any odors caused by perspiration.

The Lifebuoy brand of soap was first produced in England in 1895. Famously in the 1920s, Lifebuoy had a campaign using the Philadelphia Phillies name. One of the advertisements on a wall at the Baker Bowl (former home to the Phillies) proclaimed “The Phillies use Lifebuoy”. Someone defaced the advertisement by adding the words “… and they still stink!” Witty!

50. Lloyd of the silents HAROLD
Harold Lloyd was a comic actor in the Silent Era whose name is often listed with Charlie Chaplin and Buster Keaton. Lloyd used to so his own stunts, a practice that caused him to lose the thumb and index finger of his right hand in one accident. Lloyd used a special glove in subsequent movies to hide the injury.

54. Charlotte ___ (cream-filled dessert) RUSSE
Charlotte Russe is a cold dessert consisting of Bavarian cream set in a mold layered with ladyfingers. The dessert was named by its creator in honor of Princess Charlotte, daughter of British King George IV, and in honor of Czar Alexander I of Russia (“russe” is French for “Russian”).

55. Law enforcers at sea: Abbr. USCG
The US Coast Guard (USCG) has the distinction of being the country’s oldest continuous seagoing service. The USCG was founded as the Revenue Cutter Service by Alexander Hamilton in 1790.

57. ___ Empire (bygone domain) INCA
The Inca Empire was known as the Tawantinsuyu, which translates as “land of the four quarters”. The Inca Empire was a federal organization having a central government that sat above four “suyu” or “quarters”, four administrative regions.

59. Title river in 1957’s Best Picture KWAI
The river referred to in the movie (and novel) “The Bridge on the River Kwai” is actually called the Khwae Yai River, and is in western Thailand. The original novel by Pierre Boulle was published in French in 1952, and the wonderful movie released in 1957. Both tell the story of construction of part of the Burma Railway and a bridge over the river, using prisoners of war as laborers. The film stars William Holden, Alec Guinness and Jack Hawkins.

66. Cartoon Chihuahua REN
“The Ren and Stimpy Show” is an animated television show that ran on Nickelodeon from 1991 to 1996. The title characters are Marland “Ren” Höek, a scrawny Chihuahua, and Stimpson J. Cat, a rotund Manx cat. Not my cup of tea …

Diagonal
1 Annual message HAPPY MOTHER’S DAY
Note the official punctuation in “Mother’s Day”, even though one might think it should be “Mothers’ Day”. President Wilson, and Anna Jarvis who created the tradition, specifically wanted Mother’s Day to honor the mothers within each family and not just “mothers” in general, so they went with the “Mother’s Day” punctuation.