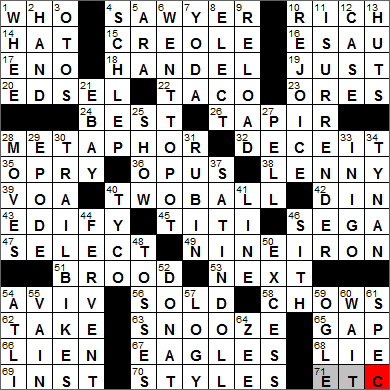 CROSSWORD SETTER: Gary Cee
THEME: Across in Down … we have some answers today that cross each other in the grid, in the format: “across answer” IN “down answer”

16. Biblical progenitor of the Edomites : ESAU
According to the Bible, the Edomites were the descendants of Esau. “Edom” translates from Hebrew as “red”, and was the name given to Esau when he at the “red pottage”.

17. Producer of seven U2 albums : ENO
Brian Eno started out his musical career with Roxy Music. However, Eno’s most oft-played composition (by far!) is Microsoft’s “start-up jingle”, the 6-second sound you hear when the Windows operating system is booting up. Eno might have annoyed the Microsoft folks when he stated on a BBC radio show:
I wrote it on a Mac. I’ve never used a PC in my life; I don’t like them.

Irish singer Bono is a Dubliner, born Paul David Hewson. As a youth, Hewson was given the nickname “Bono Vox” by a friend, a Latin expression meaning “good voice”, and so the singer has been known as Bono since the late seventies. His band’s first name was “Feedback”, later changed to “The Hype”. The band members searched for yet another name and chose U2 from a list of six names suggested by a friend. They picked U2 because it was the name they disliked least …

18. “Messiah” composer : HANDEL
George Frideric Handel was the King of the Oratorio. Handel’s most famous oratorio is “Messiah”, which had its debut performance in Dublin, Ireland back in 1742.

20. Son of Henry Ford : EDSEL
The Edsel brand of automobile was named for Edsel, son of Henry Ford. Sadly, the name “Edsel” has become synonomous with “failure”, which was no fault of Edsel himself who had died several years before the Edsel line was introduced.

22. Snack with carne asada, maybe : TACO
Carne Asada translates from Spanish as “roasted meat”, and is a roast beef dish.

23. Lode finds : ORES
A lode is metal ore deposit that’s found between two layers of rock or in a fissure.

26. Animal with a prehensile snout : TAPIR
All four species of tapir are endangered. Even though the tapir looks much like a pig, it is more closely related to the horse and the rhinoceros. The tapir’s snout is very flexible and can grab hold of foliage that would otherwise be out of reach.

35. Nashville music mecca, for short : OPRY
“The Grand Ole Opry” started out as a radio show in 1925 originally called the WSM “Barn Dance”. In 1927, the “Barn Dance” radio show was broadcast in a slot after an NBC production called “Musical Appreciation Hour”, a collection of classical works including Grand Opera. In a December show, the host of “Barn Dance” announced, “For the past hour, we have been listening to music taken largely from Grand Opera. From now on we will present the ‘Grand Ole Opry'”. That name was used for the radio show from then on.

38. Comical Bruce : LENNY
Lenny Bruce was the stage name of comedian Leonard Schneider. Bruce was noted for his edgy style and material on stage, as well as his edgy lifestyle offstage. He was arrested several times and charged with obscenity because of language used in his routines. He was eventually found guilty of one of the charges and sentenced to four months in a workhouse. He was set free on bail while making a much-publicized appeal. Sadly, he died before the appeal process was completed. After his death, the Governor of the New York granted Lenny Bruce a pardon.

39. U.S. broadcaster in 40+ languages : VOA
The US began shortwave propaganda broadcasts in early 1942, just after America entered WWII. The first broadcast to Germany was introduced by the “The Battle Hymn of the Republic” and opened with the words:

Today, and every day from now on, we will be with you from America to talk about the war. The news may be good or bad for us — We will always tell you the truth.

40. It’s solid blue, in pool : TWO-BALL
The more correct name for the game of pool is pocket billiards. The name “pool” arose after pocket billiards became a common feature in “pool halls”, places where gamblers “pooled” their money to bet on horse races.

42. Emanation from Babel : DIN
We use the word “babel” now to describe a scene of confusion, lifting the term from the biblical story of the Tower of Babel. The Tower was built in the city of Babylon, and the construction was cursed with a confusion of languages due to the varied origins of all the builders.

43. Give moral guidance : EDIFY
“To edify” is to provide instruction in order to improve spiritually, morally or intellectually. The intent is to “build up” someone’s faith or morality, and so “edify” comes from the Latin “aedificare” meaning “to build, construct”. This Latin root also gives us our word “edifice”.

45. South American monkey : TITI
Titis are monkeys found in much of South America that have tails a little bit longer than the length of their heads and bodies.

46. Sonic the Hedgehog’s company : SEGA
Sega is a Japanese video game company headquartered in Tokyo. Sega actually started out 1940 in the US as Standard Games and was located in Honolulu, Hawaii. The owners moved the operation to Tokyo in 1951 and renamed the company to Service Games. The name “Sega” is a combination of the first two letters of the words “Se-rvice” and “Ga-mes”.

58. Dogs with dark tongues : CHOWS
The Chow Chow (sometimes just “Chow”) is a breed of dog that originated in China. The Chinese name for the breed is “Songshi Quan”, which translates as “puffy-lion dog”, a rather apt name given its appearance …

66. Lender’s security : LIEN
A lien is the right that one has to retain or secure someone’s property until a debt is paid.

67. N.F.L. team with the mascot Swoop : EAGLES
The Philadelphia Eagles football team adopted “Swoop” as its mascot in 1998, replacing “Blitz”.

71. Yadda yadda yadda : ETC
“The Yada Yada Yada” is actually the name of the 153rd episode of “Seinfeld”. Before “Seinfeld” made “yada yada yada” famous, we were more likely to hear the phrase “yadda yadda”, often used by comedian Lenny Bruce for example.

Down
3. Oklahoma tribesmen : OTOS
The Otoe (also Oto) Native American tribe originated in the Great Lakes region as part of the Winnebago or Siouan tribes. The group that would become the Otoe broke away from the Winnebago and migrated southwestwards ending up in the Great Plains. In the plains the Otoe adopted a semi-nomadic lifestyle dependent on the horse, with the American bison becoming central to their diet.

4. Haul (around) : SCHLEP
Our word “schlep” means “to carry, drag”. As one might expect, “schlep” comes from Yiddish, with “shlepen” having the same meaning.

5. Astronomical altar : ARA
The constellation of Ara takes its name from the Latin word for “altar”.

6. Deteriorated : WENT TO POT
The phrase “go to pot”, meaning fall into ruin, has been around since the 1500s when it really meant “go to (the) pot”, to be chopped up and boiled for food.

7. Jedi master : YODA
The Jedi are the “good guys” in the “Star Wars” series of movies. The most famous Jedi knights from the films are Obi-Wan Kenobi (played by Alec Guinness, and later Ewan McGregor) and Yoda (voiced by Frank Oz). Well, they’re my favorites anyway …

11. “Uncle!” : I SURRENDER!
The term “uncle”, meaning “stop, I quit”, is a very North American expression. It has been around since the early 1900s but I couldn’t unearth its etymology.

27. Student grant named for a senator : PELL
Pell Grants are awarded by the federal government to students in financial need so that they can attend college. The grant is named for Senator Claiborne Pell, who sponsored the bill that introduced aid for students.

29. Lyric poem : EPODE
An epode is a lyric poem made up of couplets in which the first line is long, and the second line much shorter. The form was invented by the Greek poet Archilochus, and was most famously used by the Roman poet Horace.

34. Tenor Ronan ___ : TYNAN
Ronan Tynan is a classical singer from Ireland who is best known as a member of the Irish Tenors. Tynan is also known as participant in the 1984 and 1988 Paralympics as he has had both his legs amputated below the knee.

37. Duke Ellington classic : SATIN DOLL
Duke Ellington was a bandleader and composer believed by many to have elevated jazz to the same level as other respected genres of music. Ellington tended not to use the word “jazz” to describe his compositions, preferring the term “American Music”.

40. Classic model train brand : TYCO
The Tyco brand of toys was founded in 1926 as Mantua Metal Products by John Tyler. The first products made were scale model trains using die-cast metal. The company introduced the Tyco brand in the fifties, with “Tyco” standing for “Tyler Company”.

46. Jedi foes : SITH
The Sith are characters in the “Star Wars” universe who use the “dark side” of “the Force”, and as such are the antithesis of the Jedi Knights. The last made of the six “Star Wars” movies is called “Star Wars Episode III: Revenge of the Sith”.

48. Deep-sixes : TOSSES
To deep-six something is to toss it, possibly overboard, or to completely destroy it. The derivation of this slang term is from “six feet deep”, not the length of a fathom but rather the traditional depth of a grave.

50. What a gourmand eats to : EXCESS
A gourmand is someone who takes great pleasure in consuming food and drink, often eating and drinking to excess. The related term “gourmet” refers to someone who has a refined palate.

The fabulous 1939 movie “Goodbye, Mr. Chips” is an adaptation of a novel of the same name by James Hilton. Heading the cast are British actors Robert Donat and Greer Garson. “Goodbye, Mr. Chips” was remade as musical in 1969 starring Peter O’Toole and Petula Clark. I haven’t seen the remake, and frankly am a little scared to do so …

54. Literary Hun king : ATLI
Atli is a character in the Volsunga Saga of 13th century Icelandic lore. It is believed that the Atli character is loosely based on Attila the Hun.

57. Feeling sluggish : LOGY
Something that is “logy” is dull and heavy. “Logy” might come from the Dutch word “log” that means “heavy, dull”.

64. Series ender : ZEE
The letter named “zed” has been around since about 1400, and derives from the Greek letter zeta. The spelling and pronunciation of “zee” used in America today first popped up in the 1670s.