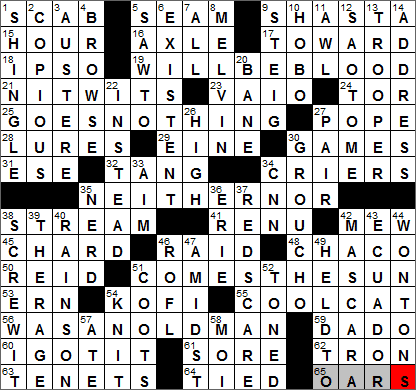 CROSSWORD SETTER: Josh Knapp
THEME: Not Here nor There … today’s themed answers are missing either of the words HERE or THERE:

Today’s Wiki-est, Amazonian Googlies
Across
1. Target of union hatred SCAB
We first started calling strikebreakers “scabs” in the early 1800s, and before that a scab was a person who refused to join a trade union (back as early 1777). The word probably comes from the use of “scab” as a skin disease, and so is a term that is meant to insult.

15. H-___ HOUR
The most famous D-Day in history was June 6, 1944, the date of the Normandy landings in WWII. The term “D-Day” is used by the military to designate the day on which a combat operations are to be launched, especially when the actual date has yet to be determined. What D stands for seems to have been lost in the mists of time although the tradition is that D just stands for “Day”. In fact, the French have a similar term, “Jour J” (Day J), with a similar meaning. We also use H-Hour to denote the hour the attack is to commence.

18. Literally, “itself” IPSO
“Ipso” is the Latin word for “itself”, as used in “ipso facto” meaning “by the fact itself”.

23. Sony laptop line VAIO
VAIO is a line of computers manufactured by Sony. The name was originally an acronym of Video Audio Integrated Operation, but this was changed to Visual Audio Intelligent Organizer on the occasion of the brand’s 10th anniversary in 2008.

27. Francis, for one POPE
The current Bishop of Rome, Pope Francis, was born in Buenos Aires as Jorge Bergoglio and is of Italian descent.

29. A, in Altdorf EINE
Altdorf is the capital of Uri, a canton in the German part of Switzerland. Altdorf is the city where William Tell shot the apple off his son’s head, at least according to legend.

32. “It’s a kick in a glass” sloganeer, once TANG
Tang is a fruity drink that is sold in powdered form. The sales of Tang “took off” when John Glenn took Tang on his Mercury flight. There is a common misconception that Tang was invented for the space program. That’s not true, although it was included in the payload of many missions.

48. New Mexico’s ___ Canyon CHACO
Chaco Canyon in New Mexico is preserved for the nation as Chaco Culture National Historical Park. The canyon is home to what is arguably the nation’s most significant collection of pueblo ruins in the country.

50. “American Pie” actress Tara REID
Tara Reid is an actress known for roles she played on television and the big screen. My guess is her most remembered performances were in the “American Pie” series of movies in which she played Vicky. Sadly, Reid succumbed to the pressure to alter her looks with plastic surgery. In interviews, she has shared that her first experience under the knife “went wrong” leading to more surgeries in attempts to rectify the deformity.

51. *”Abbey Road” track (HERE) COMES THE SUN
“Here Comes the Sun” is a song on the Beatles album “Abbey Road”. It is one of the few Beatles recordings that was written by George Harrison.

“Abbey Road” was the last album that the Beatles released before they finally broke up. “Abbey Road” was named after the street in London in which the recording studio was located. The Fab Four is featured in the album’s cover, walking across the pedestrian crossing that’s in the road right in front of the studio.

53. Coastal hunter ERN
The ern (also erne) is also called the white-tailed eagle, and the sea-eagle.

54. Diplomat Annan KOFI
Kofi Annan is the diplomat from Ghana who served as General Secretary of the UN for ten years until the beginning of 2007. Annan attended the MIT Sloan School of Management from 1971-72, and graduated with a Master of Science degree.

56. *Start of many limericks (THERE) WAS AN OLD MAN
No one knows for sure how the verse known as a limerick got its name, although there does seem to be agreement that the name does indeed come from the city or county of Limerick in Ireland.

62. Suffix with cyclo- -TRON
A cyclotron accelerates charged particles (ions) using a magnetic field, usually directing the particles round and round a huge underground circular structure.

65. Whaleboat features OARS
Whaleboats are narrow open boats traditionally used for whaling. Whaleboats are powered using oars, although some versions have temporary mast and sails that can be rigged.

Down
8. Director Van Peebles MELVIN
Melvin Van Peebles is an actor and director who uses the nickname “Block”. Van Peebles’ most noted film is “Sweet Sweetback’s Baadasssss Song” from 1971, a movie that he wrote, produced, directed and in which he starred. The film’s success spawned a string of films by mainstream studios that were oriented towards the African American segment of the audience, a move viewed by some as “blaxploitation”. Examples of such movies are “Shaft” and “Super Fly”.

9. Shrek creator STEIG
Before “Shrek” was a successful movie franchise and Broadway musical, it was a children’s picture book called “Shrek!” authored and illustrated by William Steig. The title “Shrek!” came from the German/Yiddish word Schreck, meaning “fear” or “terror”.

10. Wandering soul HOBO
No one seems to know for sure how the term “hobo” originated, although there are lots of colorful theories. My favorite is that “hobo” comes from the first letters in the words “ho-meward bo-und”, but it doesn’t seem very plausible. A kind blog reader tells me that according to Click and Clack from PBS’s “Car Talk” (a great source!), “hobo” comes from “hoe boy”. Hoe boys were young men with hoes looking for work after the Civil War. Hobos differed from “tramps” and “bums”, in that “bums” refused to work, “tramps” worked when they had to, while “hobos” traveled in search of work.

12. Island off the Gabonese coast SAO TOME
São Tomé is one of two islands off the west coast of Africa that make up the nation of São Tomé and Príncipe.

26. Baked HIGH
Someone described a “baked” is high, on drugs perhaps.

30. Whom some novelty disguises imitate GROUCHO
Groucho glasses are a novelty disguise consisting of glasses attached to a plastic nose with a moustache and eyebrows included. The design is of course inspired by the comic appearance that Groucho Marx assumed in his movies.

34. “This is ___” CNN
CNN (Cable News Network) was launched in 1980, and was the first television channel in the world to provide news coverage 24 hours a day.

37. McCarthyite paranoia RED SCARE
After WWII the United States went through what was called “Second Red Scare”, the fear of communist infiltration in American society and government. Senator Joseph McCarthy became a lightning rod for this movement when he chaired Senate hearings in the fifties designed to root out communist infiltrators.

42. Maybelline product MASCARA
Maybelline was founded in 1925 in New York by a chemist who was inspired to produce a line of mascara when he noticed his sister applying some makeup. The young lady was using a mixture of Vaseline and coal dust on her eyelashes to make them appear darker and fuller. He produced a product in the laboratory that had a similar effect and started to sell it. The sister’s name was Maybel, and Maybelline became the new company name.

43. It’s crossed by a center line ECUADOR
“Ecuador” is the Spanish word for “equator”, which gives the country its name.

44. Soup dumplings WONTONS
A wonton is a dumpling used in Chinese cooking. Wontons are often boiled and served in a wonton soup.

51. Geezers COOTS
Geezer and coot are two not-so-nice terms for an old man.