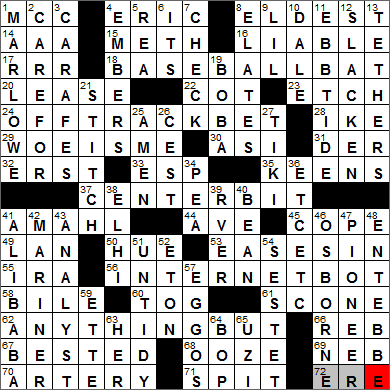 18A. Louisville Slugger, e.g. : BASEBALL BAT
24A. Wager that’s not made at the site of the race : OFF-TRACK BET
37A. Hole-positioning gadget : CENTER BIT
56A. Automated Web program : INTERNET BOT
62A. By no means : ANYTHING BUT

Today’s Wiki-est, Amazonian Googlies
Across
4. ___ the Red : ERIC
According to Icelandic tradition, Erik the Red was the man responsible for founding the first Nordic settlement in Greenland. Erik had a famous son, the explorer Leif Ericson.

15. The “M” in S.M.U.: Abbr. : METH
Southern Methodist University (SMU) is located in University Park, Texas (part of Dallas), and was founded in 1911. In 2008, President George W. Bush agreed to the selection of SMU as the site for his Presidential Library. The building is currently under construction and is expected to open in 2013.

18. Louisville Slugger, e.g. : BASEBALL BAT
The Louisville Slugger is a brand of baseball bat manufactured by the Hillerich & Bradsby Company in Louisville, Kentucky. The famous bat is made of Northern White Ash grown on the New York/Pennsylvania border. These ash forests used by the company are threatened by the Emerald Ash Borer which is moving closer and closer every year. There are already plans in place to replace the traditional wood used in the bat as the assumption is that the source of ash will succumb to infestation.

24. Wager that’s not made at the site of the race : OFF-TRACK BET
Off-Track Betting (OTB) is the legal gambling that takes place on horse races outside of a race track. A betting parlor can be referred to as an OTB.

28. Eisenhower, informally : IKE
When the future president was growing up, the Eisenhower family used the nickname “Ike” for all seven boys in the family, as “Ike” was seen as an abbreviation for the family name. “Big Ike” was Edgar, the second oldest boy. “Little/Young Ike” was Dwight, who was the third son born. Dwight had no sisters.

31. Architect Mies van ___ Rohe : DER
Ludwig Mies van der Rohe was a German architect who was routinely referred to simply as “Mies”. I am a philistine, I know, but Mies’ buildings look very plain to me. However, he did come up with two far-from-plain sayings: “less is more” and “God is in the details”.

35. Wails : KEENS
“To keen” is to wail in lamentation. The word “keening” has its roots in Ireland, coming from the Irish word “caoinim” meaning “I weep, wail, lament”.

37. Hole-positioning gadget : CENTER BIT
A center bit is usually used for drilling with a hand brace. The center of the bit has a screw thread that is used to accurately center the bit as it starts drilling, and to pull the main cutting bit into the wood.

44. Fifth or Madison, in N.Y.C. : AVE
Madison Avenue became the center of advertising in the US in the twenties, and serves as the backdrop to the great TV drama “Mad Men”. There aren’t many advertising agencies left on Madison Avenue these days though, as most have moved to other parts of New York City. The street takes its name from Madison Square, which is bounded on one side by Madison Avenue. The square in turn takes its name from James Madison, the fourth President of the United States.

49. Computer grouping, for short : LAN
You may have a Local Area Network (LAN) in your house. If you’ve got a PC and a router or switch, likely attached to some modem, then you have a LAN.

55. Lyricist Gershwin : IRA
Ira Gershwin was the lyricist who worked with his brother George to create such American classics as the songs “I Got Rhythm” and “Someone to Watch Over Me”, as well as the opera “Porgy and Bess”. After George Gershwin died, Ira continued to create great music, working with the likes of Jerome Kern and Kurt Weill.

56. Automated Web program : INTERNET BOT
A bot is computer program that is designed to imitate human behavior. It might “crawl” around the Web doing searches for example, or it might participate in discussions in chat rooms by giving pre-programmed responses.

58. Vitriol : BILE
We use the term “vitriol” to mean “bitter or abusive feelings”. This usage stems from the original meaning of the term as a corrosive substance, a sulphate of iron that produces sulfuric acid when heated. Sulfuric acid used to be referred to as “oil of vitriol”. The use of the term in chemistry comes from the Latin “vitrium” meaning “glass”, as the iron sulphate sometimes had a glassy appearance.

60. Dress (up) : TOG
The verb “tog”, meaning to dress up, comes from the Latin “toga”. “Tog” can be use as an informal word for a coat or a cloak. Back in Ireland, togs are what we call swimming shorts.

66. One of Gen. Lee’s force : REB
Robert E. Lee is of course renowned as a southern officer in the Civil War. Lee was a somewhat reluctant participant in the war in that he opposed the secession of his home state of Virginia from the Union. At the beginning of the war, President Lincoln invited Lee to take command of the whole Union Army but he declined, choosing instead to stay loyal to his home state.

69. Omaha’s home: Abbr. : NEB
Omaha is the largest city in the state of Nebraska. When Nebraska was still a territory Omaha was its capital, but when Nebraska achieved statehood the capital was moved to the city of Lincoln.

5. Actor Stephen : REA
Stephen Rea is an Irish actor, whose most famous role was that of the “retired” IRA man in the brilliant 1992 film “The Crying Game”. He also starred in the chilling movie “Stuck”, a 2007 film that is based on a true story about a woman who commits a hit and run on a homeless man. The woman leaves the scene of the crime with the victim still “stuck” in her windshield. The woman leaves the man to die in her garage. Chilling, eh? But as I said, a true story …

7. Chess declaration : CHECK
In the game of chess, when the king is under immediate threat of capture it is said to be “in check”. If the king cannot escape from check, then the game ends in “checkmate” and the player in check loses. In the original Sanskrit game of chess, the king could actually be captured. Then a rule was introduced requiring that a warning be given if capture was imminent (today we announce “check!”) so that an accidental and early ending to the game doesn’t occur.

9. Rapper ___ Jon : LIL
Lil Jon is a rapper, with the real name Jonathan Mortimer Smith. That’s all I know …

10. Racer Earnhardt : DALE
Dale Earnhardt, Sr. was known for his aggressive driving style earning him the nickname “the Intimidator”. Earnhardt was stubborn too, and also had the nickname “Iron Head”. Earnhardt died in a crash in the 2001 Daytona 500. Dale Earnhardt, Jr. is also a NASCAR driver, and is doing quite well for himself. Dale Jr. is said to be worth about $300 million.

25. “You said it, brother!” : AMEN!
The word “amen” is translated as “so be it”. “Amen” is said to be of Hebrew origin, but it is likely to be also influenced by Aramaic and Arabic.

27. Kind of torch at a luau : TIKI
A tiki torch is a bamboo torch that’s very commonly used in Tiki culture. Tiki culture is a relatively modern invention dating from the 20th century, and is the experience created in Polynesian-style restaurants. The word “Tiki” is borrowed from Polynesia.

38. K-12, in education lingo : ELHI
“Elhi” is an informal word used to describe anything related to schooling from grades 1 through 12, i.e. elementary through high school.

39. Winnebago owner, briefly : RVER
Winnebago Industries is a company that has been manufacturing travel trailers in Forest City, Iowa since 1958. The company made its first motor home in 1966. Winnebago motor homes were very successful because they were priced so reasonably. The line was so successful that “Winnebago” entered the language as a generic term for a motor home.

41. “Open sesame” sayer : ALI BABA
There is some controversy about the story “Ali Baba and the Forty Thieves” in that it has been suggested it was not part of the original collection of Arabic tales called “One Thousand and One Nights”. The suggestion is that the Ali Baba tale was added by one of its European translators.

46. “One of Us” singer Joan : OSBORNE
Joan Osborne is a blues singer, best known for her 1995 hit “One of Us”, a song dealing with one’s relationship with God.

47. Daniel Boone, notably : PIONEER
Daniel Boone was a pioneer and folk hero. For Boone the frontier was what we now call the state of Kentucky. He led the building of the Wilderness Road through the famous Cumberland Gap in the Appalachians, a route subsequently taken by hundreds of thousands of migrants into Kentucky. Boone fought in the Revolutionary War with distinction, and after the war returned to Kentucky and got himself into land speculation. He became mired in debt, forcing him to emigrate to Missouri to settle down on land that was at that time owned by the French. It was there that he spent the last decades of his life.

48. Ugandan site of a 1976 Israeli rescue : ENTEBBE
Kampala is the capital city of Uganda. The airport that serves Kampala is in the town of Entebbe. Entebbe airport is well known for the daring hostage-rescue carried out by Israeli Defense Forces in 1976 following a highjacking.

In June 1976 an Air France plane was hijacked by Palestinian terrorists and flown to Entebbe, the capital city of Uganda in Africa (this was during the days that Idi Amin was in control of Uganda). One week after the hijacking, Israeli Defense Forces conducted a rescue mission that was largely successful. One of the 100 Israeli commandos was killed, and 103 hostages were rescued. All the hijackers were killed, and three hostages died in the raid. 45 Ugandan soldiers also were killed and 11 Ugandan MiG fighter planes were destroyed. There was a fourth hostage in a Ugandan hospital who was killed by Ugandan army officers as an act of reprisal. The Israeli commando who died was the leader of the mission, Jonathan Netanyahu, the older brother of the current Israeli Prime Minister, Benjamin Netanyahu.

52. English institution since 1440 : ETON
The world-famous Eton College is just a brisk walk from Windsor Castle, which itself is just outside London. Eton is noted for producing many British leaders including David Cameron who took power in the last UK general election. The list of Old Etonians also includes Princes William and Harry, the Duke of Wellington, George Orwell, and the creator of James Bond, Ian Fleming (as well as 007 himself as described in the Fleming novels).

54. Six-line poem : SESTET
A sestet is a group of six lines of poetry similar to a quatrain, a group of four lines.

57. Certain frozen waffles : EGGOS
Eggo is the brand name of a line of frozen waffles made by Kellogg’s. When they were introduced in the 1930s, the name “Eggo” was chosen to promote the “egginess” of the batter. “Eggo” replaced the original name chosen, which was “Froffles”, created by melding “frozen” and “waffles”.

65. Israeli weapon : UZI
The first Uzi submachine gun was designed in the late 1940s by Major Uziel Gal of the Israel Defense Forces who gave his name to the gun.