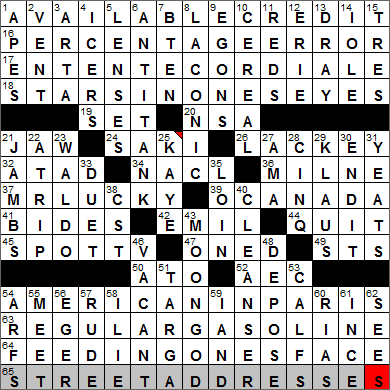 Today’s Wiki-est, Amazonian Googlies
Across
17. Bringer of peace : ENTENTE CORDIALE
An “entente cordiale” is a friendly understanding, usually between two nations. The term, which translates from French as “cordial agreement”, was first used to describe a set of agreements between the UK and France in 1904.

19. One built for Broadway : SET
Broadway really is, and always has been, the Main Street of New York City. It started out as the Wickquasgeck Trail that was trampled into the Manhattan brush land by the Native Americans of the area. In the days of the Dutch, the trail became the man road though the island of Manhattan, down to the New Amsterdam settlement in the south. The Dutch described it as a “Breede weg”, a broad street or broad way. The name Broadway was adopted as the official name for the whole thoroughfare in 1899 … on Valentine’s Day.

20. Intel processor? : NSA
The National Security Agency (NSA) was set up in 1952 by President Truman, a replacement for the Armed Forces Security Agency that had existed in the Department of Defense since 1949. The NSA has always been clouded in secrecy and even the 1952 letter from President Truman that established the agency was kept under wraps from the public for over a generation. I really like the organization’s nickname … “No Such Agency”.

24. “The Chronicles of Clovis” author : SAKI
Hector Hugh Munro was a British writer, actually born in Burma. Munro was famous for his short stories, which he published using the pen name “Saki”. His most well-known story is “The Open Window”, which ends with the great line “Romance at short notice was her specialty”.

26. Running dog : LACKEY
A lackey is someone quite servile, or a male servant. The term probably comes from the Middle French “laquais”, a word used for a footman or servant.

34. Curing stuff, symbolically : NACL
Sodium chloride (NaCl, common salt) is an ionic compound, a crystal lattice made up of large chloride (Cl) ions in a cubic structure, with smaller sodium (Na) ions in between the chlorides.

Cary Grant was an actor from England who made it big, really big in Hollywood. “Cary Grant” is a stage name, chosen by Archibald Leach. There’s a great moment in the film “His Girl Friday” when Grant says the line “I never had so much fun since Archie Leach died”, an inside joke.

39. Northern game preceder : O CANADA
Canada’s national anthem was commissioned in 1880 by the Lieutenant Governor of Quebec, so the original words are in French. The first English translation was made in 1906. The current English lyrics have been revised a few times, but the French version remains the same as it did back in 1880.

47. Flat : ONE-D
I guess something flat could be described as one-dimensional. On the other hand, I would have something “flat” would have to be planar, and hence two-dimensional …

52. Post-W.W. II fed. agcy. : AEC
The Atomic Energy Commission (AEC) was set up right after WWII in 1946, with the aim of promoting the peaceful use of atomic energy. Establishing the AEC was a significant move made by President Truman, as it passed control of atomic energy from the military to the civilian sector. The AEC continued to operate until 1974 when its functions were divided up into two new agencies: the Energy Research and Development Administration and the Nuclear Regulatory Commission (NRC).

54. Tone poem that calls for four taxi horns, with “An” : AMERICAN IN PARIS
“An American in Paris” is a wonderful symphonic tone poem composed by George Gershwin in 1928. Gershwin was inspired to write the piece after spending time in the French capital in the twenties. When it was first performed in Carnegie Hall the audience could really hear the sounds of the city, especially as the orchestra used real taxi horns that Gershwin had brought back from Paris.

The difference between a premium and regular gasoline is its octane rating. The octane rating is measure of the resistance of the gasoline to auto-ignition i.e. it’s resistance to ignition just by virtue of being compressed in the cylinder. This auto-ignition is undesirable as multiple-cylinder engines are designed so that ignition within each cylinder takes place precisely when the plug sparks, and not before. If ignition occurs before the spark is created, the resulting phenomenon is called “knocking”.

Down
3. “Thou ___ lady”: King Lear : ART A
Shakespeare was inspired to write his famous drama “King Lear” by the legend of “Leir of Britain”, the story of a mythological Celtic king.

6. Like bazookas : ANTI-TANK
A bazooka is a metal tube rocket launcher. The first bazooka-type weapon was developed for the US Army just before the end of WWI.

7. 1930s bomber : B-TEN
The Martin B-10 bomber entered service in 1934. It was the first bomber to have retractable landing gear, an internal bomb bay and a powered gun turret. It was built for speed and was 50% faster than its predecessor biplane bombers, and at the time of its introduction, the B-10 was so fast it could outpace any fighter in the air.

8. Not windy at all : LACONIC
Someone described as “laconic” is a person who uses few words, who is terse. The term comes from the Greek “Lakon”, some from Lakonia that surrounded Sparta in Ancient Greece. The people from Lakonia were proud of their brevity of speech.

Egon Wellesz was an Austrian composer who fled his country for England after the occupation by the Nazi Germany. Wellesz was also a noted teacher at Oxford University.

10. Life is one : CEREAL
Life is a whole grain oat cereal that was introduced in 1961 by the Quaker Oats Company.

11. Their caps have a stylized “C” : REDS
The Red Scare (i.e. anti-communist sentiment) following WWII had such an effect on the populace that it even caused the Cincinnati baseball team to change its name from the Reds. The team was called the Cincinnati Redlegs from 1953-1958, as the management was fearful of losing money due to public distrust of any association with “Reds”.

12. Language related to Wyandot : ERIE
The language of the Erie people was an Iroquoian language that was similar to Wyandot.

The Wyandot language is an Iroquoian language that died out almost 100 years ago, although there are attempts at a revival in both Oklahoma and Quebec.

13. Transporter of beer barrels : DRAY
A dray is a side-less, 4-wheeled cart used for hauling goods.

14. Captive of Heracles : IOLE
Iole was a beautiful young woman of Greek Mythology, loved by Heracles. But Heracles could not marry Iole because her father refused to allow the match. In Roman mythology, Heracles was known as Hercules.

21. Window parts : JAMBS
A door or window jamb is the vertical portion of the frame. The term “jamb” comes from the French word “jambe” meaning “leg”.

22. Like some anchors and sails : ATRIP
When an anchor is “aweigh” or “atrip”, it is just clear of the bottom, having just been lifted. A sail is said to be atrip when it is in position and ready to be trimmed.

23. Not just another face in the crowd? : WALDO
The reference is to the series of children’s illustrated books called “Where’s Waldo?”, originally titled “Where’s Wally?” in Britain where the books originated.

25. “The Inspector General” star, 1949 : KAYE
The actor Danny Kaye was a big hit in his native US, but also in France. Kaye was the first ambassador-at-large for UNICEF and the French awarded him the Legion of Honor in 1986 for his work.

“The Inspector General” is a musical comedy released in 1949 starring Danny Kaye. The film is loosely based on the play of the same name by Nikolai Gogol.

29. “Revolver” Grammy winner Voormann : KLAUS
Klaus Voormann is a German musician who was the bass player with Manfred Mann in the sixties. Voormann also worked as a record producer, notably producing the worldwide hit “Da Da Da” for the German band Trio. He is also an artist, and designed artwork for bands such as the Bee Gees, Wet Wet Wet and the Beatles. Voormann won a Grammy for the cover design of the Beatles album “Revolver”.

40. One of several Procter & Gamble products : CLEANSER
Procter & Gamble was a founded in 1837 by William Procter and James Gamble. Procter was a candlemaker, an immigrant from England. Gamble was a soapmaker, an immigrant from Ireland. The pair had settled in Cincinnati and married two sisters. Their father-in-law persuaded the two to set up in business together, and rest is history.

43. Chandra, in Hindu belief : MOON GOD
Chandra is a moon god in the Hindu tradition. Chandra rides his chariot across the night sky, pulled by an antelope and ten white horses.

51. Porsche 911 model : TARGA
The Porsche 911 comes in a Targa version. The name “Targa” comes from the Targa Florio road race that is held in Sicily, Italy every year.

56. Hohenberg’s river : EGER
The Ohre is a tributary of the Elbe that runs through Germany and the Czech Republic. In Germany, the Ohre is also known as the Eger.

The German town of Hohenberg an der Eger is in Bavaria, on the border with the Czech Republic.

58. First name in ’70s tennis : ILIE
I think that Ilie Nastase was the most entertaining tennis player of the 1970s, the days of Jimmy Connors, Bjorn Borg and John McEnroe. No matter how much pressure there was in a match, Nastase always had time to give the crowd a laugh.

59. Martin Buber’s “___ Thou” : I AND
Martin Buber was an Austrian-born Israeli philosopher.

61. Thomas H. ___, the Father of the Western : INCE
Thomas H. Ince was a silent film actor as well as a prolific director and producer. Ince built his own movie studio in Culver City, which later became home to Metro-Goldwyn-Mayer. Ince died under controversial circumstances on board the yacht belonging to newspaper magnate William Randolph Hearst. The official cause of death was reported as heart failure, but rumors have persisted that Ince was shot by Hearst. Supposedly Ince took a bullet in a fight between Hearst and Charlie Chaplin over a woman.