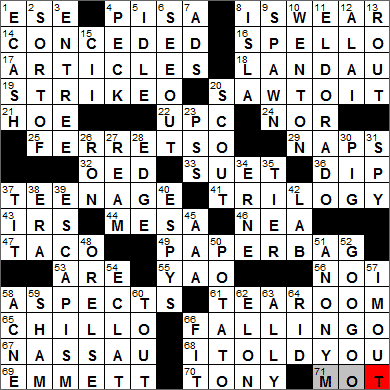 CROSSWORD SETTER: James Tuttle
THEME: Falling Out … our themed answers today have a FALLING “OUT”, so the first word of each answer is read “across” and last word (OUT) is read in the “down” direction in the grid:

Today’s Wiki-est, Amazonian Googlies
Across
1. Lingo suffix : -ESE
“Lingo” is a specialized vocabulary, as in “journalese” and “legalese”, for example.

4. City down the river from Florence : PISA
The city of Pisa is right on the Italian coast, sitting at the mouth of the River Arno, and is famous for its Leaning Tower. The tower is actually the campanile (bell tower) of the city’s cathedral, and it has been leaning since it was completed in 1173. Just shows you how important good foundations are …

18. Horse-drawn vehicle : LANDAU
A landau is a 4-wheeled, horse-drawn carriage. It was quite sophisticated, with metal springs for a comfortable ride, and the smaller version (a landaulet) had a top that could fold down. Landaus were so called as they were first produced in the German city of Landau.

24. Word before “happiness,” “majesty” and “fame” at the start of a Shelley poem : NOR
The sonnet “Political Greatness” by Percy Bysshe Shelley starts out:

Nor happiness, nor majesty, nor fame,
Nor peace, nor strength, nor skill in arms or arts,
Shepherd those herds whom tyranny makes tame;

29. They’re taken in hammocks : NAPS
Our word “hammock” comes via Spanish from Haiti, evolving from a word used there to describe a fishing net.

32. Ref. with more than 2 1/2 million quotations : OED
The “Oxford English Dictionary” (OED) contains over 300,000 “main” entries and 59 million words in total. It is said it would take a single person 120 years to type it out in full. The longest entry for one word in the second edition of the OED is the verb “set”. When the third edition was published in 2007, the longest entry for a single word became the verb “put”. Perhaps not surprisingly, the most-quoted author in the OED is William Shakespeare, with his most quoted work being “Hamlet”. The most-quoted female author is George Eliot (aka Mary Ann Evans).

33. It’s for the birds : SUET
Suet is a very popular ingredient in food provided for bird feeders.

Fat, when extracted from the carcass of an animal, is called “suet”. Untreated suet decomposes at room temperature quite easily so it has to be “rendered” or purified to make it stable. Rendered fat from pigs is what we call “lard”. Rendered beef or mutton fat is known as “tallow”.

37. Like many first-time voters : TEENAGE
The minimum age of voters was called out in the US Constitution when it was passed in 1787. This was set at 21 years, and of course applied to only white male property owners. The minimum age of voters was lowered in the Twenty-sixth Amendment to the Constitution in 1971 as a response to student activism. Young people at that time were frustrated that they were mature enough to be drafted to fight in the Vietnam War, yet were not considered mature enough to vote in elections.

41. Dante’s “The Divine Comedy,” e.g. : TRILOGY
Dante Alighieri’s “Divine Comedy” is an epic poem dating back to the 14th century. The first part of that epic is “Inferno”, which is the Italian word for “Hell”. In the poem, Dante is led on a journey by the poet Virgil, starting at the gates of Hell on which are written the famous words “Abandon all hope, ye who enter here”.

44. Badlands sight : MESA
“Mesa” is the Spanish for “table” and is of course is how we get the term “mesa” that describes a geographic feature. “What’s the difference between a butte and a mesa?” I hear you cry! Both are hills with flat tops, but a mesa has a top that is wider than it is tall. A butte is a much narrower formation, taller than it is wide. Now we know …

Badlands may be “bad lands” for agriculture, but they can be beautiful. A badlands is an extensive area from which the topsoil has been eroded by wind and water, leaving exposed rock and very little vegetation. One of the most beautiful badlands areas in the US is preserved for the nation as South Dakota’s Badlands National Park.

55. Hoopster Ming : YAO
Yao Ming is a retired professional basketball player from Shanghai who played for the Houston Rockets. At 7’6″, Yao was the tallest man playing in the NBA.

67. World capital that’s a setting for three Bond films : NASSAU
Nassau, the capital of the Bahamas, used to be called Charles Town. After having been burnt to the ground by the Spanish in 1684, it was rebuilt and named Nassau in honor of King William III of England, a Dutchman from the House of Orange-Nassau (aka William of Orange). Nassau is a favored location for the James Bond series of movies. The city and surroundings feature in “Thunderball”, “Never Say Never Again”, “Casino Royale” and “For Your Eyes Only”.

70. Frosted Flakes mascot : TONY
Tony the Tiger has been the mascot of Frosted Flakes cereal since the product’s introduction in 1951. As Tony would say, “They’re Gr-r-reat!”

71. Clever comment : MOT
“Bon mot” translates from French as “good word”. We use “bon mot” (and sometimes just “mot”) to mean a quip, a witticism.

Down
1. PayPal funds, e.g. : ECASH
PayPal has been around since the year 2000, born out of a merger of two older companies: Confinity and X.com. PayPal was so successful that it was the first of the beleaguered dot.com companies to successfully complete an IPO after the attacks of 9/11. Then in 2002, PayPal was bought by eBay for a whopping $1.5 billion.

11. Conquistador’s quest : EL DORADO
The original El Dorado was a Muisca chief who was covered with gold dust in a tribal ritual and then dove into Lake Guatavita in present-day Colombia. Later, “El Dorado” was adopted as the name for a mythical “Lost City of Gold” that became a quest from many Spanish Conquistadors who explored the Americas.

“Conquistador” is the Spanish for “conqueror”.

12. Jai ___ : ALAI
Even though jai alai is often said to be the fastest sport in the world because of the speed of the ball, in fact golf balls usually get going at a greater clip.

20. Kit Carson, professionally : SCOUT
Kit Carson was a frontiersman who moved west from Missouri when he was just 16 years old. Kit Carson’s life was immortalized in the novels of John C. Fremont, an explorer who hired Carson as a guide for his travels through California, Oregon and Nevada. Carson later served with the US Army. He is thought to be the only American to have achieved the rank of general without being able to read or write.

23. Ltr. addenda : PSS
One adds a PS (post scriptum, or simply “postscript”) at the end of a letter. A second postscript is a post post scriptum, a PPS.

26. Former White House nickname : RON
Ronald Reagan started out his political career as a member of the Democratic Party, but switched to the Republicans in the early fifties. He served as Governor of California for eight years, and vied unsuccessfully for the nomination for US President on two occasions. He finally succeeded in 1980 and defeated President Jimmy Carter to become the 40th US President in 1981.

34. Marine eagle : ERNE
The ern (also erne) is also called the white-tailed eagle, and the sea-eagle.

37. “___-Willow” (song from “The Mikado”) : TIT
“Tit Willow” is a song from Gilbert & Sullivan’s “The Mikado”. The song refers to the Willow Tit, a small bird found right across Europe and Asia.

38. Unsuccessful ’70s-’80s cause : ERA
The Equal Rights Amendment (ERA) was written by the American suffragist leader, Alice Paul. Although Paul was successful in her campaign to get passage of the 19th Amendment to the US Constitution (guaranteeing voting rights regardless of sex), her 1923 Equal Rights Amendment didn’t make it to the Senate floor until 1972. The amendment was passed by the Senate, and then headed to the state legislatures for the required ratification. 38 states had to approve the legislation for the amendment to be adopted, but only 35 states voted in favor before the deadline. So the amendment is still pending, although about half of the fifty states have adopted the ERA into their state constitutions.

40. Awards show named for a TV network : ESPYS
The ESPY Awards are a creation of the ESPN sports television network. One difference with similarly named awards in the entertainment industry is that ESPY winners are chosen solely based on viewer votes.

50. Food named six times in a children’s number rhyme : POTATO
“One Potato” is a counting out game designed to select a person who is “it” in a kid’s game. The selection depends on the rhyme:

51. Assumed name : ANONYM
An anonym is an anonymous person, or a pseudonym.

52. Kind of eyes : GOO-GOO
Goo-goo eyes (a slang term) are amorous or loving eyes. The term “goo-goo” is often applied with tongue-in-cheek”.

54. Brilliance : ECLAT
Éclat can mean a brilliant show of success, or the applause or accolade that one receives. The word derives from the French “éclater” meaning “to splinter, burst out”.

57. Words from one who’d rather not call? : I’M OUT
Someone playing a game of poker might not wish to call a bet and instead says, “I’m out”.

62. North Carolina university : ELON
Elon is a city in the Piedmont region of North Carolina, close to the city of Burlington. Elon University is a private liberal arts school founded in 1889.