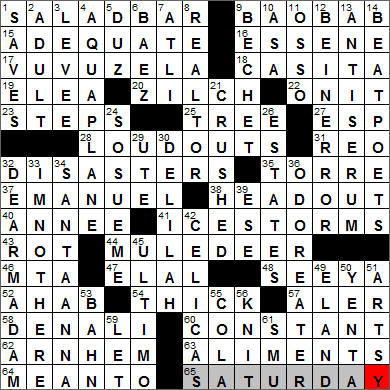 CROSSWORD SETTER: Ned White
THEME: None
BILL BUTLER’S COMPLETION TIME: Did not finish!
ANSWERS I MISSED: Several in the very top right of the grid

Today’s Wiki-est, Amazonian Googlies
Across
9. With 25-Across, it has a huge trunk : BAOBAB
(25A. See 9-Across : TREE)
“Baobab” is the common name for an Adansonia tree, most species of which are native to Madagascar. The name Adansonia was given in honor of the French naturalist and explorer Michel Adanson.

16. Ancient abstainer : ESSENE
The Essenes were a Jewish religious group, most noted these days perhaps as the writers of the Dead Sea Scrolls.

17. Buzzer sounded during a match : VUVUZELA
A vuvuzela is a simple horn that produces a loud monotone note. The vuvuzela is a big hit with soccer fans in South Africa, and is now heard in stadiums all round the world after it was was introduced to us in the 2010 FIFA World Cup that was held in South Africa.

18. Small house of the Southwest : CASITA
“Casita” is the diminutive form of “casa”, the Spanish word for “house”.

19. Whence Parmenides : ELEA
Parmenides was a philosopher in Ancient Greece. Parmenides was born in the Greek city of Elea located on the Italian coast and so the school of philosophy that he founded is called the Eleatic School.

20. Bubkes : ZILCH
“Bupkis” (also “bubkes”) is a word that means “absolutely nothing, nothing of value”, and is of Yiddish origin.

31. Royale maker : REO
The REO Motor Company was founded by Ransom E. Olds (hence the name REO). The company made cars, trucks and buses, and was in business from 1905 to 1975 in Lansing, Michigan. Among the company’s most famous models were the REO Royale and the REO Flying Cloud.

35. Starting catcher in every All-Star Game from 1964 to 1967 : TORRE
As a manager, Joe Torre was part of four World Series wins, all of them with the New York Yankees baseball team. Torre is an Italian American who was born in Brooklyn, New York. During the run up (pun intended!) to the 2006 Winter Olympics in Turin, Torre carried the Olympic flame part of the way through Florence in Italy, handing it over to the next runner at the famous Ponte Vecchio. I’d guess that was quite a thrill for him …

40. Four French quarters? : ANNEE
In French, there are four quarters in a year (année).

41. They’re likely to result in broken limbs : ICE STORMS
Ice storms leave layers of ice on trees, and the weight might cause tree limbs to break. Or … I suppose one might slip on the ice and break a leg or an arm!

43. Claptrap : ROT
“Claptrap” these days means nonsense talk. It was originally a term used on the stage meaning a trick to attract applause, hence the name “clap trap”.

44. Prey for gray wolves : MULE DEER
The mule deer lives in North America and is named for its large ears, which resemble those of a mule.

47. “Home away from home” sloganeer : EL AL
El Al Israel Airlines is the flag carrier of Israel. The term “el al” translates from Hebrew as “to the skies”.

52. Vindictive Quaker of fiction : AHAB
Captain Ahab is the obsessed and far from friendly Captain of the Pequod in Herman Melville’s “Moby Dick”.

58. Wonder Lake’s national park : DENALI
Denali means “the high one” in the native Athabaskan language, and is now the name used for Mount McKinley. I was surprised to learn that there is a Denali State Park, as well as the Denali National Park. The two are located adjacent to each other (which makes sense!). The State Park is undeveloped for all practical purposes, with just a few campgrounds and trailheads.

62. Site of a 1944 British Army defeat : ARNHEM
Arnhem is a city in the east of the Netherlands on the river Nederrijn. Arnhem was the site of a crucial battle during Operation Market Garden of WWII. Allied paratroopers were dropped near the city with the mission to secure a vital bridge. Only a small force of British troops made it to the bridge and were unable to hold it. Operation Market Garden and the battle at Arnhem are the basis of the great 1977 movie “A Bridge Too Far”.

63. Nourishing stuff : ALIMENTS
An “aliment” is an item of food, something that nourishes. The term comes from the Latin “alimentum” meaning “nourishment”.

3. Bad thing to be breached : LEVEE
A levee is an artificial bank usually made of earth, running along the length of a river. A levee is designed to hold back river water at a time of potential flooding. “Levée” is the French word for “raised” and is an American term that originated in French-speaking New Orleans around 1720.

4. Water board : AQUAPLANE
An aquaplane is a board that is towed behind a speedboat, with someone standing on it (hopefully).

5. Old brand that promised “white white washes without red hands” : DUZ
Duz was a laundry detergent that was formulated as a competitor to Tide. Strangely enough, both Duz and Tide were manufactured by Procter & Gamble. We had a detergent in the British Isles called Daz, and my guess is this was the same product as Duz, but with a slightly different name.

6. Guthrie’s follower at Woodstock : BAEZ
Joan Baez is an American folk singer and a prominent activist in the fields of nonviolence, civil rights, human rights and environmental protection. Baez has dated some high-profile figures in her life including Bob Dylan, Steve Jobs (of Apple) and Mickey Hart of the Grateful Dead.

7. Hun king, in myth : ATLI
Atli is a character in the Volsunga Saga of 13th century Icelandic lore. It is believed that the Atli character is loosely based on Attila the Hun.

8. Frequent tour guide : REALTOR
Some helpful blog readers have educated me on the term “Realtor” and have pointed out why the word is capitalized. “Real estate agent” is a general, generic term. “Realtor” is the name given to a member of the trade association known as the National Association of Realtors (NAR). The NAR has gone so far as the trademark the term “Realtor” in the US.

9. Saxophone great Sidney : BECHET
Sidney Bechet was a jazz saxophonist and composer from New Orleans. Bechet has the honor being the first jazz saxophonist to make a studio recording. He found it easier to make a living in Europe than he did in the US, in France in particular. He relocated to France, married there and eventually passed away in Paris in 1959 succumbing to lung cancer.

Antivenom is made by extracting venom from say a snake (so called “milking”) and then diluting it and injecting it into a host animal (like a cat, horse or sheep). The animal undergoes an immune response and produces antibodies to neutralize the poison. The antibodies are harvested from the animal’s blood and are stored for use with victims who are bitten by the same snake, or by some other creature that injects the same or a similar venom. I guess antivenom might also be called antiserum …

14. Six Gallery reading participants : BEAT POETS
The group of American writers known as the Beat Generation first came to prominence at a poetry reading at the Six Gallery in San Francisco in October of 1955. Five young poets presented their work that day:

30. Lock remover of old? : DELILAH
Delilah is a Biblical figure, the wife of Samson. Delilah was engaged by the Philistines to betray her husband by determining the secret of his great strength. Samson lied to his wife three times, but on the fourth asking he told his wife the truth, that he did not cut his hair. Delilah then convinced Samson to shear his locks and so allowed him to be captured by his enemies. Over the centuries, it has been usual to depict Delilah actually cutting off her husband’s hair, but the Bible actually says that she persuaded Samson to do the job himself.

34. 1836 siege leader : SANTA ANNA
The famous Alamo in San Antonio, Texas was originally known as Mission San Antonio de Valero. The mission was founded in 1718 and was the first mission established in the city. The Battle of the Alamo took place in 1836, a thirteen-day siege by the Mexican Army led by President General Antonio Lopez de Santa Anna. Only two people defending the Alamo Mission survived the onslaught. One month later, the Texian army got its revenge by attacking and defeating the Mexican Army in the Battle of San Jacinto. During the surprise attack on Santa Anna’s camp, many of the Texian soldiers were heard to cry “Remember the Alamo!”.

42. Some Toyotas : CELICAS
The name “Celica” used by Toyota comes from the Latin “coelica” meaning “heavenly”.

45. Last month : ULTIMO
“Ultimo” is the Italian for “last” and is used in English to mean “in the last month”.

49. Ethiopian grazer : ELAND
An eland is a large African antelope, in fact the largest on the continent.

The fictional store, Kwik-E-Mart, is operated by Apu Nahasapeemapetilon on “The Simpsons” TV show. The convenience store owner doesn’t seem to be making much practical use of his Ph. D. in computer science that he earned in the US. His undergraduate degree is from Caltech (the Calcutta Technical Institute), where he graduated top of his class … of seven million students …

56. Use a ball winder : KNIT
When knitting, a ball winder is used to easily transform hanks or skeins into more easily managed balls of wool.

59. Cry from some judges : LET
In tennis, a let service is one in which the balls lands fairly but after hitting the top of the net. A let service is retaken.

61. Conference USA member, for short : SMU
Southern Methodist University (SMU) is located in University Park, Texas (part of Dallas), and was founded in 1911. In 2008, President George W. Bush agreed to the selection of SMU as the site for his Presidential Library. The library opened in 2013.

Conference USA is a Southern US college athletic conference that was founded in 1995.