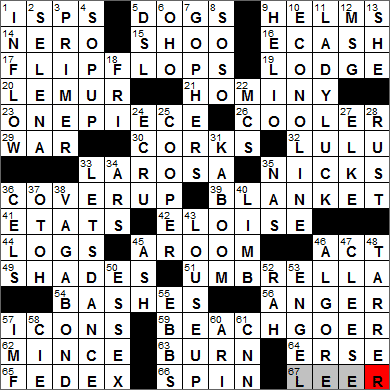 59A. One packing up the answers to the seven starred clues, maybe : BEACHGOER

Today’s Wiki-est, Amazonian Googlies
Across
1. Verizon FiOS and EarthLink, briefly : ISPS
An Internet Service Provider (ISP) is just what the name indicates, a company that provides its customers with access to the Internet. One way that ISPs differentiate themselves from each other is in the way in which end users are connected to the ISP’s network. So, there are cable ISPs, DSL ISPs, dial-up ISPs and satellite ISPs. I’d go with cable if I were you, if it’s available in your area …

FiOS is a service from Verizon that bundles Internet, telephone and television service. All three services are provided over fiber-optic lines, right to the door.

EarthLink is an IT services company. One service offered by EarthLink is internet access, which it provides to about a million consumers.

5. Feet, in slang : DOGS
Apparently the phrase “my dogs are barking” meaning “my feet are hurting” originated in America in the 1920s. From there evolved the use of the term “dogs” for “feet”.

14. Face on a coin of A.D. 64 : NERO
The emperor Nero had quite the family life. When Nero was just 16-years-old he married his stepsister, Claudia Octavia. He also had his mother and step-brother executed.

20. Madagascar mammal : LEMUR
Lemurs are the most unusual-looking creatures, native to the island of Madagascar off the east coast of Africa. With their white fur and dark eyes that are very reflective at night, they have a “ghostly” appearance. Indeed, the animals takes their name from Roman mythology in which “lemures” were spirits of the restless dead.

Madagascar is the large island country lying off the southeast coast of Africa in the Indian Ocean. The main island of Madagascar is the fourth largest island in the world (after Greenland, New Guinea and Borneo).

21. Grits, essentially : HOMINY
Hominy is a dish consisting of dried kernels of maize that have been treated with an alkali. The term “hominy” is derived from a Native American word for “maize”.

26. *Hoosegow : COOLER
“Hoosegow” is a slang term for “jail”. “Hoosegow” is a mispronunciation of the Mexican-Spanish word “juzgao” meaning “court, tribunal”.

33. Singer Julius of early TV : LA ROSA
Julius La Rosa has been singing on radio and television since the fifties, although doesn’t perform very often now as he is in his eighties. He worked as a disk jockey for many years up to the end of the nineties, introducing old time music on a New York radio station.

35. Styptic pencil targets : NICKS
Alum is common name for the chemical potassium aluminium sulfate. Styptic pencils can contain alum as the active ingredient that stems bleeding from a small cut. The alum acts as an astringent, a compound that shrinks some body tissues.

42. Overprivileged 6-year-old of children’s lit : ELOISE
Kay Thompson wrote the “Eloise” series of children’s books. Kay Thompson actually lived at the Plaza Hotel in New York, the setting she would choose for her “Eloise” stories. Eloise started out as a hit song for Thompson, a success that she parlayed into the book franchise.

44. Ship records : LOGS
The word “logbook” dates back to the days when the captain of a ship kept a daily record of the vessel’s speed, progress etc. using a “log”. A log was a wooden float on a knotted line that was dropped overboard to measure speed through the water.

45. Virginia Woolf’s “___ of One’s Own” : A ROOM
Virginia Woolf was an English author active in the period between the two World Wars. Woolf’s most famous novels were “Mrs. Dalloway”, “To the Lighthouse” and “Orlando”. She also wrote a long essay entitled “A Room of One’s Own” in which she states “A woman must have money and a room of her own if she is to write fiction.”

49. *Ghostly figures : SHADES
A “shade” is a ghost, a disembodied spirit.

65. U.P.S. alternative : FEDEX
FedEx began operations in 1973 as Federal Express, but now operates very successfully under it’s more catchy abbreviated name. Headquartered in Memphis with its “SuperHub” at Memphis International Airport, FedEx is the world’s largest airline in terms of tons of freight flown. And due to the presence of FedEx, Memphis Airport has the largest-volume cargo operation of any airport worldwide.

Down
2. Actress Gomez : SELENA
Selena Gomez is a young actress from Grand Prairie, Texas. Gomez’s first television role was in the children’s show “Barney & Friends”. She then played the lead in the TV series “Wizards of Waverly Place”. Offscreen, Gomez made a splash as the girlfriend of Canadian singer Justin Bieber for a couple of years.

8. Garnering a “meh,” say : SO-SO
“Meh!” is one of those terms unfamiliar to me outside of crosswords. It is a modern colloquialism meaning “I’m not great, but not bad”.

9. Prefix with -tropic : HELIO-
Many plants grow towards the light, say of the sun. That behavior is known as heliotropism.

11. Figure invoked in casinos : LADY LUCK
The “casino” originated in the 1700s, first describing a public room for music or dancing. The name “casino” is a diminutive of “casa” meaning “house”.

13. “Ain’t ___ Sweet” (song classic) : SHE
“Ain’t She Sweet” is a popular song first published in 1927, composed by Milton Ager and Jack Yellen. Ager wrote the song for his daughter, Shana. Shana grew up to become Shana Alexander, a political commentator on CBS’s “60 Minutes”.

18. It’s “Black” once a year: Abbr. : FRI
In the world of retail, “Black Friday” is the day after Thanksgiving in the US. Black Friday is when many stores start the holiday shopping season, and so offer deep discounts to get ahead of the competition.

22. Ed Sullivan and others, informally : MCS
“Emcee” come from “MC”, an abbreviation for the Master or Mistress of Ceremonies.

Ed Sullivan’s most famous television role was as host of the “The Ed Sullivan Show”, which ran from 1948 to 1971, a total of 23 years. In that final year, a new set of CBS executives wanted to update the image of the network and announced the cancellation of most of the “old” shows including “The Ed Sullivan Show”. Sullivan was so mad at the decision that he refused to make a “farewell” episode.

24. Beige-ish : ECRU
The shade called ecru is a grayish, yellowish brown. The word “ecru” comes from French and means “raw, unbleached”. “Ecru” has the same roots as our word “crude”.

25. Mini ___ : COOPER
The original mini was a fabulous car, one that I drove all over Ireland in my youth. It had a unique front-wheel-drive layout that took up very little space, allowing for a lot of room (relatively speaking) for passengers and baggage. One space-saving trick was to mount the engine transversely, so it sits rotated 90 degrees from the norm. That engine had a capacity of only 848cc. In 1961, a Mini Cooper model was introduced, a sporty version of the Mini. The Mini Cooper was a phenomenal hit, especially after repeated wins in the Monte Carlo Rally. The Mini marque has been owned by BMW since 1994.

27. Hollywood’s Sommer : ELKE
Elke Sommer is a German-born actress who was at the height of her success on the silver screen in the sixties. Sommer won a Golden Globe as Most Promising Newcomer Actress for her role opposite Paul Newman in 1964’s “The Prize”. She also sings and has released several albums. Now Sommer focuses on painting, producing artwork that is strongly influenced by the work of Marc Chagall.

In early 1969, the struggling David Bowie recorded a promotional film in an attempt to reach a wider audience. The film called “Love You Till Tuesday” featured seven of Bowie’s songs in what amounted to an extended music video, with one of the tracks being “Space Oddity”. Somebody smart put two and two together later in the year and decided that a fresh version of “Space Oddity” should be released, to coincide with the Apollo moon landings. Sure enough, the BBC snagged the track for their coverage of the landings and gave Bowie huge audiences and “launched” his career.

35. “Daughters” rapper : NAS
Rapper Nas used to go by another stage name, Nasty Nas, and before that by his real name, Nasir bin Olu Dara Jones. Nas released his first album “Illmatic” in 1994, and inventively titled his fifth studio album “Stillmatic”, released in 2001. Not my cup of tea, I would say …

36. Cartoon frames : CELS
In the world of animation, a cel is a transparent sheet on which objects and characters are drawn. In the first half of the 20th century the sheet was actually made of celluloid, giving the “cel” its name.

46. Losing side in a 2000 Supreme Court ruling : AL GORE
George W. Bush won the 2000 US presidential election over Al Gore despite losing the popular vote. The result of the electoral college effectively came down to disputed votes cast in Florida. The US Supreme Court decided that these votes were to be awarded to Bush. President Bush wasn’t the first candidate to take the office without winning the popular vote. Three earlier presidents came to office in the same way : John Quincy Adams (1824), Rutherford B. Hayes (1876) and Benjamin Harrison (1888).

47. “Monty Python” comic John : CLEESE
The magnificent actor and comedian John Cleese came to the public’s attention as a cast member in the BBC’s comedy sketch show “Monty Python’s Flying Circus”. Cleese then co-wrote and starred in the outstanding comedy “Fawlty Towers”. He even had a role in two “James Bond” films.

50. County NE of London : ESSEX
Essex is a county in England, referred to as one of the “home counties”.

57. Global economic oversight org. : IMF
The International Monetary Fund (IMF) was established at the end of 1945 with 29 major economies supporting and funding an effort to stabilize economies across the globe after WWII. Headquartered in Washington, D.C., today the IMF has 187 member countries.

60. D-backs, on scoreboards : ARI
The Arizona Diamondbacks joined Major League Baseball’s National League in 1998. By winning the World Series in 2001, the Diamondbacks became the fastest expansion team to do so in Major League history.