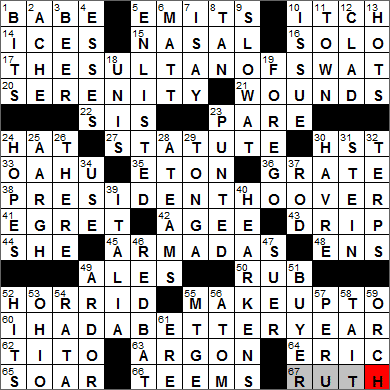 Today’s Wiki-est, Amazonian Googlies
Across
1. With 67-Across, man whose 1930 salary was $80,000 : BABE
(67A. See 1-Across : RUTH)
Jack Dunn was the owner/manager of the Baltimore Orioles back in 1913, when he signed on George Herman Ruth as a pitcher. The other players called Ruth “Jack’s newest babe”, and the name “Babe” stuck.

10. Seventh anniversary ruiner? : ITCH
The phrase “seven year itch” had been used by psychologists to describe declining interest in staying monogamous after seven years of marriage.

17. Nickname for 1-/67-Across : THE SULTAN OF SWAT
Baseball legend George Herman Ruth, Jr. had several nicknames, the best known being “Babe”. He was also called “the Bambino” and “the Sultan of Swat”.

30. Eleanor : F.D.R. :: Bess : ___ : HST
Eleanor Roosevelt was the daughter of Elliot, brother to President Theodore Roosevelt. Eleanor met Franklin D. Roosevelt, who was her father’s fifth cousin, in 1902, and the two started “walking out together” the following year after they both attended a White House dinner with President Roosevelt.

33. Obama’s birthplace : OAHU
Despite rumors to the contrary, I am pretty sure that Barack Hussein Obama II was indeed born in Hawaii. President Obama was born on August 4, 1961 at Kapi’olani Maternity & Gynecological Hospital in Honolulu, Hawaii.

35. School for James Bond : ETON
The world-famous Eton College is just a brisk walk from Windsor Castle, which itself is just outside London. Eton is noted for producing many British leaders including David Cameron who took power in the last UK general election. The list of Old Etonians also includes Princes William and Harry, the Duke of Wellington, George Orwell, and the creator of James Bond, Ian Fleming (as well as 007 himself as described in the Fleming novels).

38. Man whose 1930 salary was $75,000 : PRESIDENT HOOVER
President Herbert Hoover was born in West Branch, Iowa, the only president to have been born in that state. His birthplace is now a National Landmark, and President Hoover and his wife are buried there, in the grounds of the Herbert Hoover Presidential Library and Museum. President Hoover died at the age of 90 years old in 1964 outliving his nemesis, Franklin Delano Roosevelt, by almost 20 years.

41. Snowy wader : EGRET
At one time the egret species was in danger of extinction due to excessive hunting driven by the demand for plumes for women’s hats.

42. Writer James : AGEE
James Agee was a noted American film critic and screenwriter. Agee wrote an autobiographical novel “A Death in the Family” that won him his Pulitzer in 1958, albeit posthumously. He was also one of the screenwriters for the 1951 classic movie “The African Queen”.

45. Battlers at sea : ARMADAS
The most famous Armada was the Spanish fleet that sailed against England in order to overthrow Queen Elizabeth I in 1588. It failed in its mission, partly due to bad weather encountered en route. Ironically, the English mounted a similar naval attack against Spain the following year, and it failed as well.

48. Naval rank: Abbr. : ENS
Ensign is (usually) the most junior rank of commissioned officer in the armed forces. The name comes from the tradition that the junior officer would be given the task of carrying the ensign flag.

63. It lights up when it’s excited : ARGON
A plasma lamp is a light source that generates light by exciting a plasma inside a a glass container, using radio waves to create the plasma of ionized particles. One of the original gases used for such plasmas was argon.

64. Guitarist Clapton : ERIC
Can you believe that Eric Clapton only had one chart-topper in the US? In 1974 he released a cover version of the Bob Marley classic “I Shot the Sheriff”, and ended up selling more copies of that song than Bob Marley did himself.

Down
1. Memory units : BITS
In the world of computers, a “bit” is the basic unit of information. A bit has a value of 0 or 1. A “byte” is a small collection of bits (usually 8), the number of bits needed to uniquely identify a character of text.

3. “Beauty is in the eye of the ___ holder”: Kinky Friedman : BEER
Kinky Friedman is a country singer, novelist and humorist from Texas. Friedman actually ran as an independent candidate in the 2006 election for Governor of Texas.

4. Bluegrass duo? : ESSES
There are two letters S at the end of the word “bluegrass”.

10. Time piece? : ISSUE
“Time” magazine has a readership of about 25 million, making it the largest circulation weekly news magazine in the world.

18. One-piece garments, informally : UNIS
A unitard is like a leotard, except that it has long legs and sometime long sleeves. It wouldn’t be a good look for me …

29. Its capital is Nuku’alofa : TONGA
The Kingdom of Tonga is made up of 176 islands in the South Pacific, 52 of which are inhabited and scattered over an area of 270,000 square miles.

30. Le ___, France : HAVRE
Le Havre is a city on the mouth of the river Seine on the northwest coast of France. The city’s name translates as “the haven”.

32. A.C.C. team, informally : TERPS
The sports teams of the University of Maryland are called the Maryland Terrapins, or “the Terps” for short. The name dates back to 1932 when it was coined by the the university’s president at the time, Curly Byrd. He took the name from the diamondback terrapins that are native to the Chesapeake Bay.

51. The “emptor” in “caveat emptor” : BUYER
“Caveat emptor” is a Latin expression meaning “Let the buyer beware”. It is used when someone buys something, emphasizing that after the deal is closed, there’s no going back.

53. Home of the U.S.’s largest cities whose names start with X and Z : OHIO
Xenia, Ohio is in effect a suburb of Dayton. The name “Xenia” is the Greek word for “hospitality”. In terms of population, Xenia is the largest city in the US with a name beginning with the letter X.

The city of Zanesville served as the state capitol of Ohio from 1810 to 1812. The city was named for Ebenezer Zane who was responsible for the construction of Zane’s Trace, a road from West Virginia to Kentucky that ran through Ohio. Zanesville, Ohio is the most populous city in the US with a name beginning with the letter Z

55. Lender’s offering: Abbr. : MTGE
Our word “mortgage” comes from the Old French “mort gaige” which translated as “dead pledge”. The idea was that a pledge to repay a loan dies when the debt is cleared.