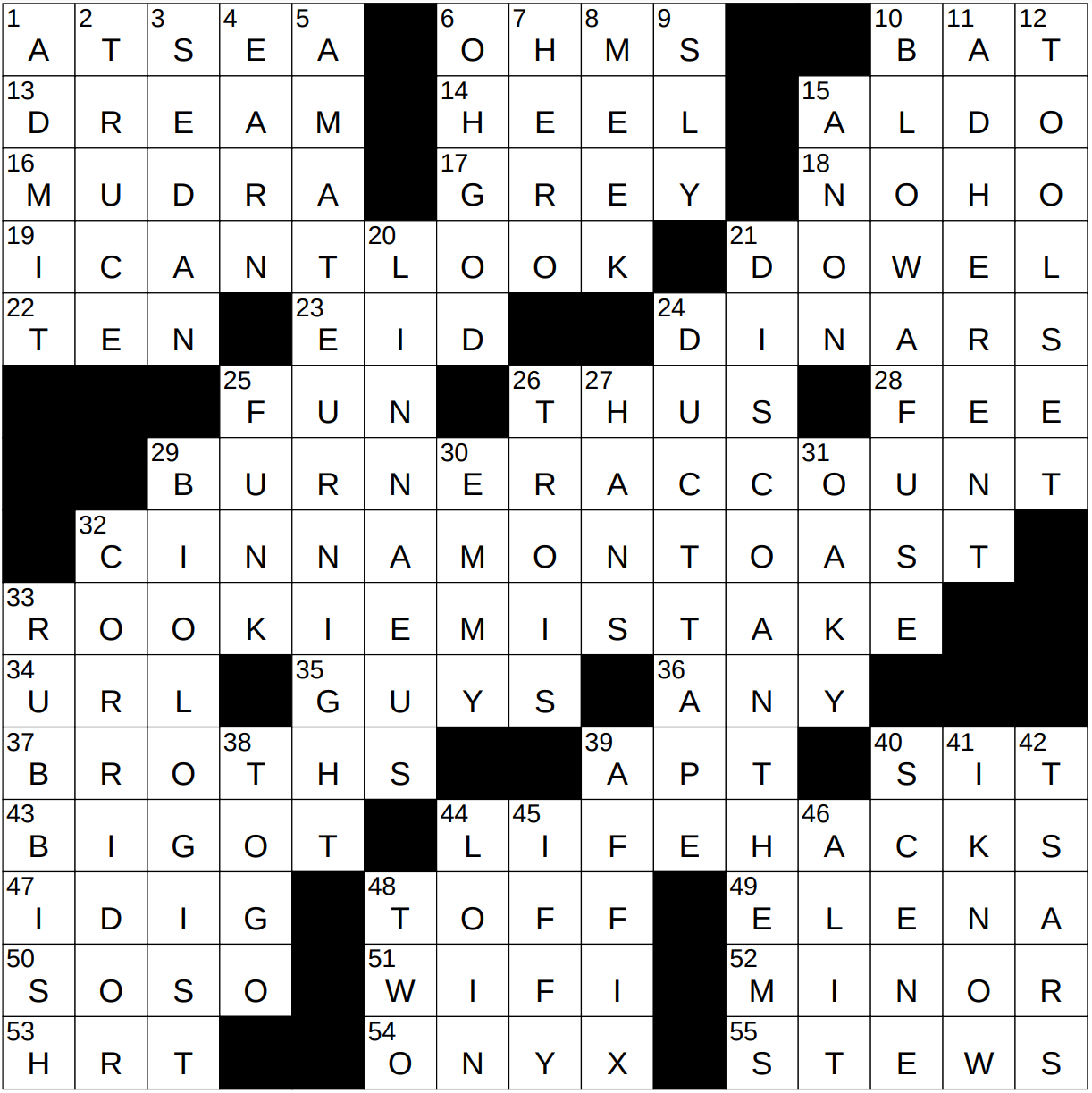 Bats are the only mammals that are capable of sustained flight. There are many, many different kinds of bats, and indeed they make up about 20% of all mammalian species.

A dowel is a rod made from plastic, wood or metal. In its complete form, it is referred to as a “dowel rod”. We are perhaps more used to the rod cut into short lengths known as “dowel pins”.

23 Festival at the end of Ramadan, informally : EID

Eid al-Fitr is a religious holiday in the Muslim tradition that is known in English as the “Festival of Breaking the Fast”. It marks the end of Ramadan, a period of dawn-to-sunset fasting.

A life hack is a technique that makes a routine task easier or more efficient. The term “life hack” was coined in 2004 by journalist Danny O’Brien when describing less-than-elegant shortcuts used by IT professionals.

“Toff” is a disparaging British term that is used for a well-dressed gentleman of the upper class.

“Elena of Avalor” is a Disney Channel TV show about a Latina princess and her family. The title character is a 16-year-old crowned princess of the magical king of Avalor.

51 Subject of a houseguest’s query : WI-FI

Chalcedony is a mineral. It is a form of silica. The name “chalcedony” might come from the ancient town of Chalcedon, which is now a suburb of Istanbul known as Kadıköy. Although the connection seems obvious, there are doubts …

The Cadenza is a full-size automobile sold in North America, and made by Kia. The same model is sold as the Kia K7 in South Korea.

A hero is a submarine sandwich. It originated in New York City in the 1800s among Italian immigrants who wanted an Italian sandwich that reminded them of home. The name “hero” was coined in the 1930s, supposedly by a food critic in the “New York Herald Tribune” when he wrote that “one had to be a hero” to finish the gigantic sandwich. Hero is a prevalent term to this day in New York City, reserved for a submarine sandwich with an Italian flavor.

Carl Linnaeus was a botanist and physician from Sweden. Linnaeus who developed the system of biological classification that we still use today. He introduced us to kingdoms, classes, orders, families, genera and species in his 1735 publication “Systema Naturae”.

24 Roll with many functions : DUCT TAPE

Funk is a genre of music that originated in the late sixties with African-American musicians, and has been described as a mix of soul, jazz and R&B. One of the more famous names associated with funk was James Brown.

Singer James Brown was often referred to as “The Godfather of Soul” and sometimes “Mr. Dynamite”. Brown was born in Barnwell, South Carolina and had a rough and impoverished upbringing. He lived for some years in his aunt’s house which she ran as a brothel, and when he was sixteen he was convicted of armed robbery and was sent to reform school. While in reform school, Brown was noticed by the R&B star Bobby Byrd, who took him under his wing. Byrd helped secure the young man an early release, and thereafter Brown turned his energies to music.

30 Courteney Cox was the only “Friends” star who never got one : EMMY

Courteney Cox played Monica Geller on the incredibly successful sitcom “Friends”. Before “Friends” she played the girlfriend of Michael J. Fox’s character on “Family Ties” for a couple of years in the late eighties. Her role in “Friends” was her biggest success, no question, when she and her fellow female co-stars became the highest paid TV actresses ever, earning a million dollars per episode.

Oak barrels are sometimes used to store wine during fermentation and aging. The oak wood has a profound effect, usually changing the wine’s color, flavor and texture. If the wine is stored in stainless steel barrels, then a similar effect can be achieved by adding oak chips or staves to the liquid.