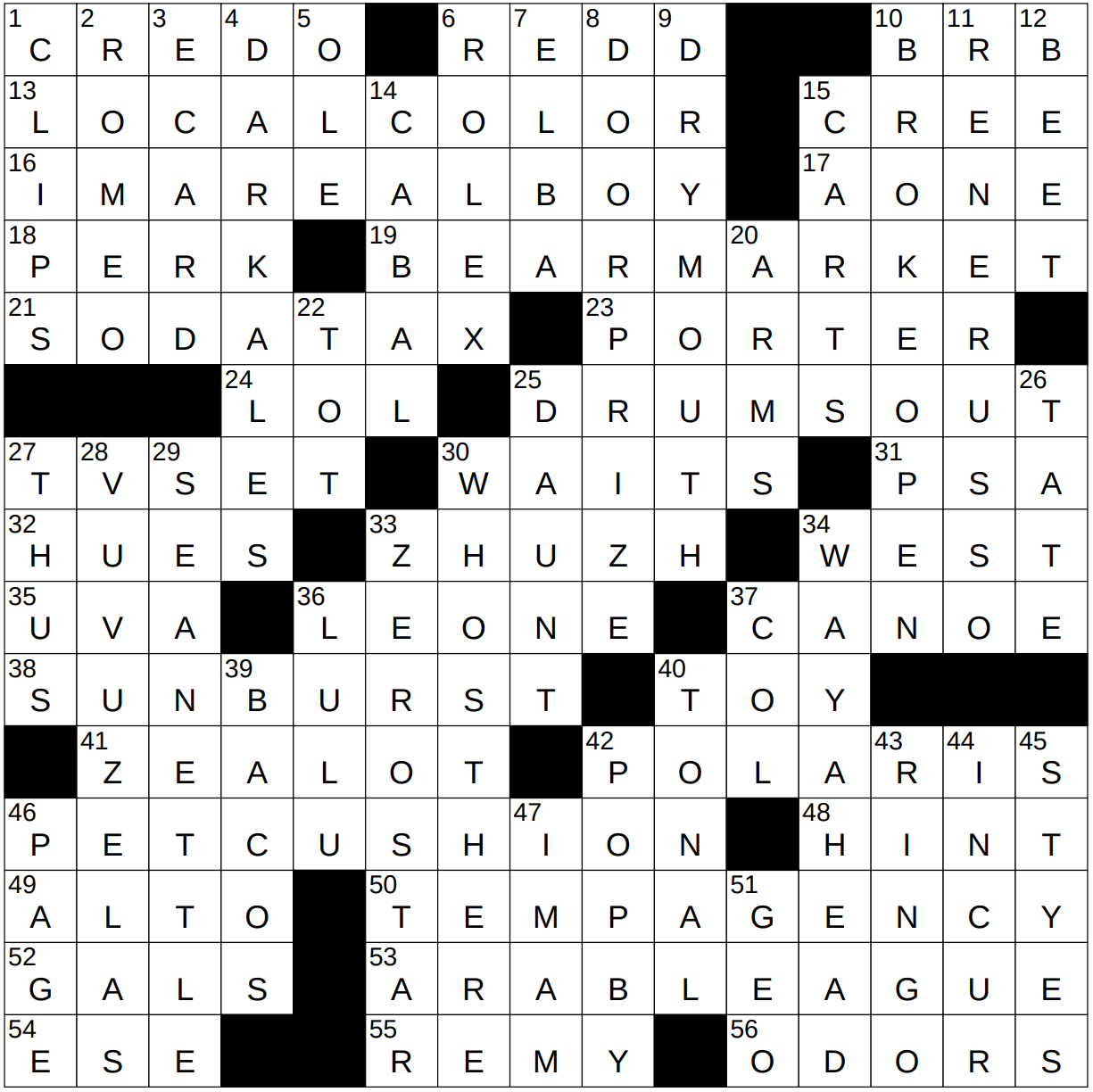 “Redd Foxx” was the stage name of John Elroy Sanford, who was best known for starring in “Sanford and Son”. “Sanford and Son” was an American version of a celebrated hit BBC sitcom that I grew up with in Ireland called “Steptoe and Son”.

“The Adventures of Pinocchio” is an 1883 children’s novel by Carlo Collodi, which is all about an animated puppet named Pinocchio, and Geppetto, his poor woodcarver father. In one of his adventures, Pinocchio encounters “the Terrible Dogfish”, a huge sea monster that is given the nickname “the Attila of fish and fishermen”. The sea monster features in the 1940 film “Pinocchio”, but in Walt Disney’s version it is given the name “Monstro” (the Portuguese word for “monster”).

2 It follows Quebec in the NATO alphabet : ROMEO

7 Portoferraio is its largest town : ELBA

10 Accessed the contents of, as a piñata : BROKE OPEN

The talented actress Rene Russo is a native of Burbank, California. Russo went to high school (with actor/director Ron Howard), but dropped out in tenth grade. At seventeen, she was given the opportunity to train as a model and within a very short time appeared on the cover of “Vogue”. As her modeling jobs slowed down in her early thirties, Russo made a career change and studied theater and acting.

Folic acid is also known as vitamin B9. Folic acid occurs in the human body as folate, a substance essential in the synthesis and repair of DNA.

20 They may be presented for visiting dignitaries : ARMS

The museum known as “the Tate” comprises four separate galleries in England. The original Tate gallery was founded by Sir Henry Tate as the National Gallery of British Art. It is located on Millbank in London, on the site of the old Millbank Prison, and is now called Tate Britain. There is also the Tate Liverpool in the north of England that is located in an old warehouse, and the Tate St. Ives in the west country located in an old gas works. My favorite of the Tate galleries is the Tate Modern which lies on the banks of the Thames in London. It’s a beautiful building, a converted power station that you have to see to believe. As of 2018, the Tate Modern was the most visited art museum in the UK.

John Constable is the most English of painters, although during his lifetime his work was more popular in France than it was in his native country. His most famous painting is “The Hay Wain” from 1821, which you can see in the National Gallery in London.

28 Horns played at many pitches : VUVUZELAS

Betty Crocker Bac-Os aren’t real “bacon bits”. Rather, they are “bacon-flavor” morsels made out of, well, probably nothing too healthy. But still, vegans should be happy to hear that there are no animal products included.

43 “With a Little Help From My Friends” singer, familiarly : RINGO

“With a Little Help From My Friends” is a Lennon/McCartney song from the 1967 “Sgt. Pepper” album. The song-writing duo wrote it specifically for the band’s drummer Ringo Starr, and so gave it a limited vocal range, except for the last note. The song opens with:

What would you think if I sang out of tune
Would you stand up and walk out on me?

Starr had those words changed from:

What would you think if I sang out of tune
Would you throw ripe tomatoes at me?

Ringo was afraid that fans would do just that, if he should ever perform the song live.

45 Warm compresses can relieve them : STYES