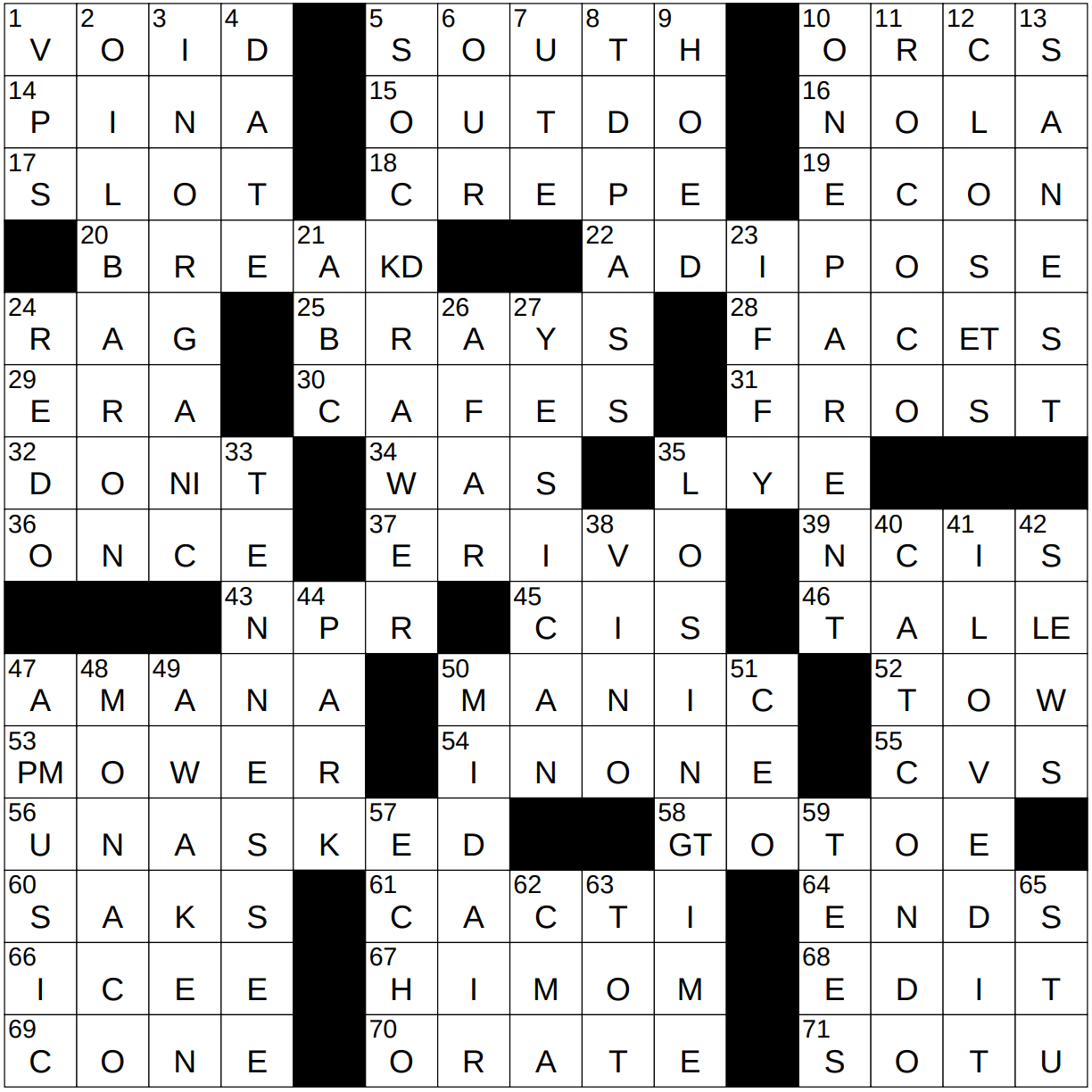 Today’s Theme (according to Bill): One Word, or Two

We have a rebus puzzle today. The two letters in each rebus form a two-letter sequence in the down-answer. Those two-letters are used individually to form two words in the across-answer:

Our word “vacuum” is Latin in origin, in which language it means the same thing: “void, empty space”.

Snowbirds are people from Canada and the northern US who head south for the winter, to places like Florida and California.

Frodo Baggins is a principal character in J. R. R. Tolkien’s “The Lord of the Rings”. He is a Hobbit, and is charged with the quest of destroying Sauron’s Ring in the fires of Mount Doom. Frodo is portrayed by American actor Elijah Wood in Peter Jackson’s film adaptations of the novels.

19 Subj. that includes the study of bubbles? : ECON

30 They line the Champs-Élysées : CAFES

35 Solution to some chemistry problems? : LYE

The term “cisgender” is used as the opposite of “transgender”. Cisgender people have a gender identity that matches the sex they were assigned at birth.

In centuries past, “tall talk” was important and grand discourse, and the opposite of “small talk”. Somehow, this use of the adjective “tall” came to be used in the phrases “tall tale” and “tall story”, which both describe an account that is untrue and not to be believed.

52 Alternative to a boot : TOW

A car parked illegally might end up incapacitated with a parking boot, a wheel clamp.

The name of the drugstore chain CVS once stood for “Consumer Value Stores”, although these days the company uses the initialism to denote “Convenience, Value and Service”.

Bergdorf Goodman is a retailer of luxury goods that was founded in 1899. The first store was a tailor shop opened in Manhattan by French immigrant Herman Bergdorf. Bergdorf hired Edwin Goodman as an apprentice. A couple of years later, Goodman saved enough money to buy an interest in the business, and so it was renamed to Bergdorf Goodman.

The saguaro is a beautiful cactus, one that is native to the Sonoran Desert in Arizona and Sonora, Mexico. Arizona is proud of its saguaros, featuring them prominently on its license plates. If you ever get a chance to visit the Saguaro National Park in southern Arizona, I thoroughly recommend it.

The US President’s State of the Union (SOTU) address is a requirement called out in Article II of the Constitution. George Washington gave the first address before a joint session of Congress in 1790. Thomas Jefferson discontinued the practice of making a personal address by sending Congress a written document that was then read out by a clerk. In 1913, Woodrow Wilson re-established the custom of delivering the message personally, there have been occasions since then when a written address has had to suffice, the last occasion being in 1981 when Jimmy Carter was in office.

7 Tribe for which a state is named : UTE

The rococo style is also known as “late baroque”. Rococo is a very floral and playful style, very ornate.

“Shark Tank” is a reality television show that features aspiring entrepreneurs making pitches to potential investors (the “sharks”) as they try to grow their businesses. The show is a Mark Burnett production and is based on a British series called “Dragons’ Den”.

Dollywood is a theme park in Pigeon Forge, Tennessee that is owned by country singer Dolly Parton. The park opened in 1961 under the name Rebel Railroad. That name was changed to Goldrush Junction in 1970, Goldrush in 1976, Silver Dollar City Tennessee in 1977 and finally to Dollywood in 1986 when Parton became a co-owner.

Prosecco still and sparkling wines are named for the village of Prosecco in the province of Trieste in northeastern Italy.

50 Where a trapeze artist performs : MIDAIR

Goulash is a soup or stew that is seasoned with spices, especially paprika. It is a national dish of Hungary, and the term “goulash” comes from the Hungarian word “gulyás”, which actually translates as “herdsman”. The original goulash was a meat dish prepared by herdsmen.