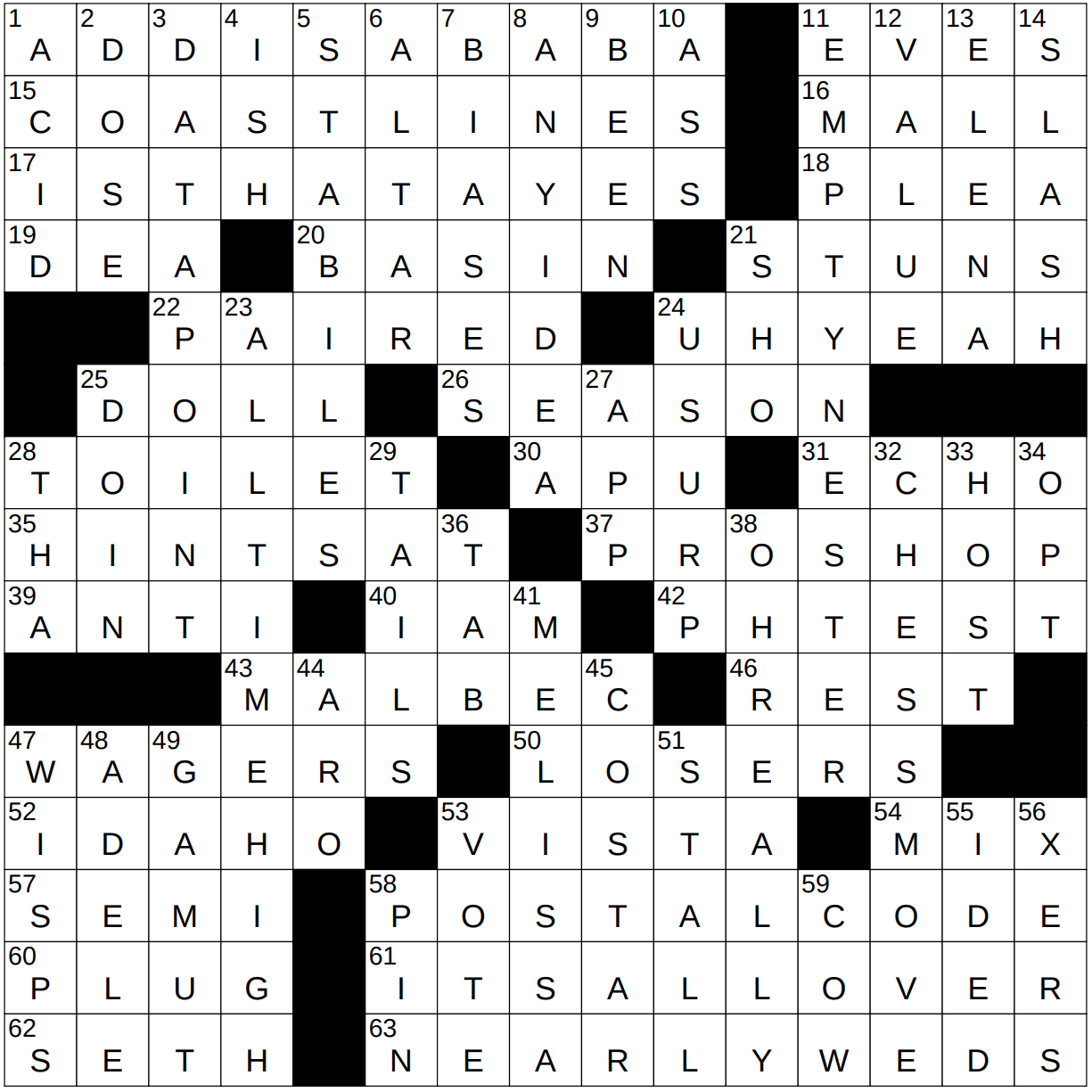 Constructed by: Brooke Husic & Yacob Yonas
Edited by: Will Shortz

16 Place for some outlets : MALL

Our word “toilet” comes into our vocabulary via a tortuous route from the Middle French “toile” meaning “cloth, net”. The French “toilette” is a diminutive of “toile”, and describes a cloth or bag for clothes. From this usage, the English word “toilet” came to mean “fine cloth cover over a dressing table”, and the “the articles used in dressing”. From there, “toilet” described the act of dressing, and then a dressing room. By the early 1800s, a toilet was a dressing room that had a lavatory attached, and eventually the lavatory itself.

Satyajit Ray was a Bengali filmmaker famous for directing “The Apu Trilogy”. These were three Bengali films that were released between 1955 and 1959. They featured music composed by Ravi Shankar, and are considered to be some of the greatest movies of all times by international critics, yet they were filmed on tiny budgets.

37 Where one might look for a good club : PRO SHOP

That would be a pro club at a golf course.

Malbec is a red wine grape that used to be mainly associated with Bordeaux. A frost killed off much of the crop in Bordeaux in the fifties, and today Malbec wines are more closely linked to Argentina and California. I must admit to being a fan of Malbec blends …

A parlay is a combination wager, one that links two or more bets. All bets have to win in order to collect on a parlay.

52 It’s slightly larger than all of New England combined : IDAHO

The geographical region of New England comprises the six northeastern states of Connecticut, Maine, Massachusetts, New Hampshire, Rhode Island, and Vermont. The name “New England” was given to the region by English explorer John Smith in 1616.

“Tourney” is another word for “tournament”. “Tourney” comes from the Old French word “tornei” meaning “contest of armed men”, from “tornoier” meaning “to joust, jilt”.

Canada Post has an official Santa Claus letter-response system that it introduced in 1983. Those wishing to write to Santa can address the envelope with the special post code H0H 0H0 (that might be written as “H0 H0 H0”). Canada Post answers about a million letters a year, each of them in the language of the sender. My hat is off to Canada Post, and to the volunteer workers at the Montreal post office that started the tradition of answering letters to Santa back in 1974 …

1 Something a person typically drops on purpose : ACID

11 One who can finally stop postponing that long R.V. trip, maybe : EMPTY NESTER

We love our children, but we love our empty nest too …

Elena Delle Donne is a professional basketball player who was the second pick in the 2013 WNBA draft, and was drafted by the Chicago Sky. She was the first WNBA player to join the 50-40-90 club, an informal statistic used to rate shooters. The requirement is to achieve a 50% field goal percentage, a 40% three-point field goal percentage, and a 90% free throw percentage.

In the game of chess, the knight is a piece with relatively unusual properties. It doesn’t move in a straight line, but rather moves two squares in one-direction, and one square in the other. Also, the knight is the only piece that can jump over others.

41 McCarthy of “Can You Ever Forgive Me?” : MELISSA

In medieval times, the musical scale was denoted by the notes “ut, re, mi, fa, sol, la”. The term “gamma ut”, shortened to “gamut”, was used to describe the whole scale. By the 1620s, “gamut” was being used to mean the entire range of anything, the whole gamut.