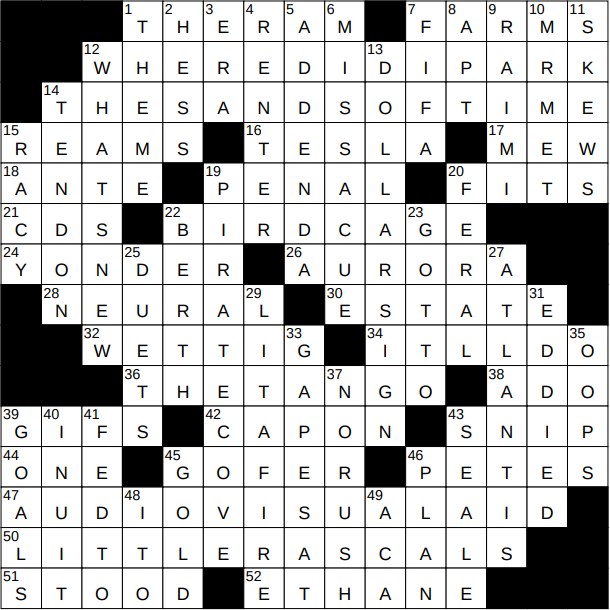 16 Inventor played by David Bowie in “The Prestige” : TESLA

“The Prestige” is a 2006 film based on a 1995 novel of the same name by Christopher Priest. The story revolves around two rival magicians played by Hugh Jackman and Christian Bale. The real-life inventor Nikola Tesla appears as a character in the movie, portrayed by the great David Bowie.

21 Things once kept in towers : CDS

36 What can’t be done alone, famously : THE TANGO

It takes two to tango …

The dramatic tango dance originated in the late 1800s in the area along the border between Argentina and Uruguay. Dancers and orchestras from Buenos Aires in particular traveled to Europe and beyond in the early twentieth century and brought the tango with them. The tango craze first struck Europe in Paris in the 1910s, and from there spread to London and Berlin, crossing the Atlantic to New York in 1913.

“Ballyhoo”, meaning “hype, publicity”, was originally circus slang dating back to the early 1900s. No one really knows where the term comes from, but I can tell you there is a village in Co. Cork in Ireland named Ballyhooly!

“Pete’s Dragon” is a Walt Disney feature film released in 1977. It’s all about an orphan named Pete who has a dragon named Elliott as a friend.

50 Buckwheat and others : LITTLE RASCALS

Buckwheat was one of moviedom’s “Little Rascals”, also known as “Our Gang”. He was played by Billie Thomas, a child actor from Los Angeles.

52 Compound that becomes a man’s name when its last letter is removed : ETHANE

Hess Corporation is an oil company based in New York City. In 1964, the company started selling toy trucks with the Hess logo on them, in Hess gas stations. The company has been selling them ever since, bringing out new models just before Christmas. Hess toy trucks have become quite collectible and the old ones can fetch a pretty penny.

10 Mascot whose head is a baseball : MR MET

14 The most well-known one is named for a Greek hero : TENDON

Blackbeard was the nickname of the celebrated English pirate Edward Teach who plied his trade around the West Indies and up and down the North American coast.

27 The land down under? : ATLANTIS

40 In which Nunavut means “our land” : INUIT

Nunavut is a Canadian territory that dates back to 1999, when it was separated from the Northwest Territories. That makes Nunavut the youngest of all Canada’s territories. It is also the nation’s largest territory, the least populous, as well as the furthest north. Even though it is the second-largest country subdivision in North America (after Greenland), Nunavut is home to just over 30,000 people, who are mostly Inuit.

Bobby Seale is a civil rights activist who co-founded the Black Panther Party with Huey Newton. Seale was one of the Chicago Eight, eight people charged as a result of anti-Vietnam war protests that took place during the 1968 Democratic Convention in Chicago. The judge ordered Seale severed from the case, reducing the group of defendants to the Chicago Seven. However, Seale’s vehement protests during the trial led to the judge ordering him bound, gagged and chained to his chair, and eventually sentenced him to four years in jail for contempt of court. That conviction was quickly overturned on appeal.

45 Metal that can be drawn into a wire an atom wide : GOLD

Gold is a metallic chemical element with the symbol “Au”. It is extremely unreactive. Silver and other base metals dissolve in nitric acid, and so testing an unknown sample with nitric acid can confirm the presence of gold. This assaying practice gave rise to the figurative use of the term “acid test” to describe any definitive test.