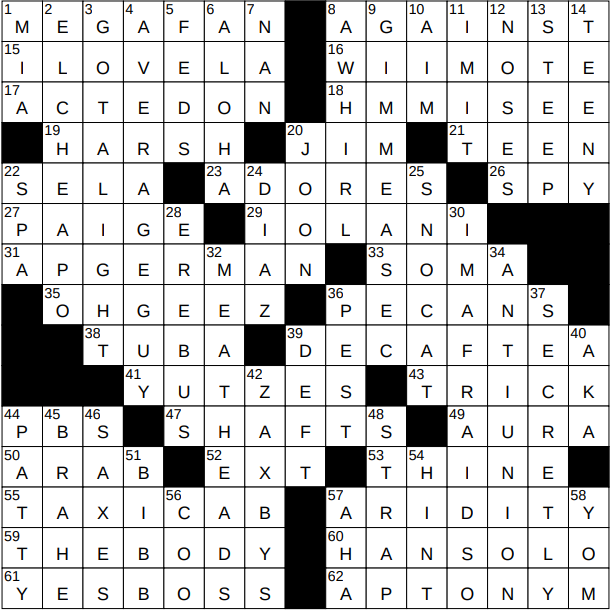 1 Buff, and then some : MEGAFAN

A buff or nut is someone who is extremely enthusiastic and knowledgeable about a subject. For example, one might be a movie buff, or perhaps a baseball nut.

“I Love L.A.” is a song written and recorded by Randy Newman in 1983. The song is played at major sporting events in the city, usually after the home team scores or wins.

16 Gaming device with a sensor : WIIMOTE

Jim Carrey is a comedian and actor from Newmarket, Ontario. Carrey’s big break in films came with the title role in the first “Ace Ventura” film, in 1994. My favorite of his big screen performances is in the fascinating film “The Truman Show”, released in 1998.

In German, one learns from “ein Lehrer” (a teacher).

36 Pieces of some pies : PECANS

55 What runs about a meter? : TAXICAB

We call cabs “taxis”, a word derived from “taximeter cabs” that were introduced in London in 1907. A taximeter was an automated meter designed to record distance traveled and fare to be charged. The term “taximeter” evolved from “taxameter”, with “taxa” being Latin for “tax, charge”.

59 Stephen King novella on which “Stand by Me” is based : THE BODY

“Stand by Me” is a 1986 film directed by Rob Reiner that is based on a Stephen King novella called “The Body”. The title of the movie comes from the wonderful Ben E. King song of the same name.

“Stand By Me” is a marvelous song co-written and first recorded in 1961 by Ben E. King. King and his partners actually wrote “Stand by Me” for the Drifters, but they passed on it. Over 400 cover versions have been recorded, including one by Muhammad Ali (when he was using the name Cassius Clay) and even one by Stephen King!

5 Some “Narcos” characters, in brief : FEDS

“Narcos” is a Netflix show that deals with the Drug Enforcement Agency’s (DEA’s) battles against drug cartels. The first two seasons focus on the rise and fall of drug lord Pablo Escobar of the Medellín Cartel, and is set and filmed in Colombia.

28 Volcano named after a god of darkness : EREBUS

Mount Erebus is a volcano that is located on Ross Island in Antarctica. It is the second-highest volcano on the continent, after Mount Sidley. It was discovered in 1841 by Sir James Clark Ross, along with the companion volcano Mount Terror. Ross named the peaks for the ships used on his voyage: HMS Erebus and HMS Terror.