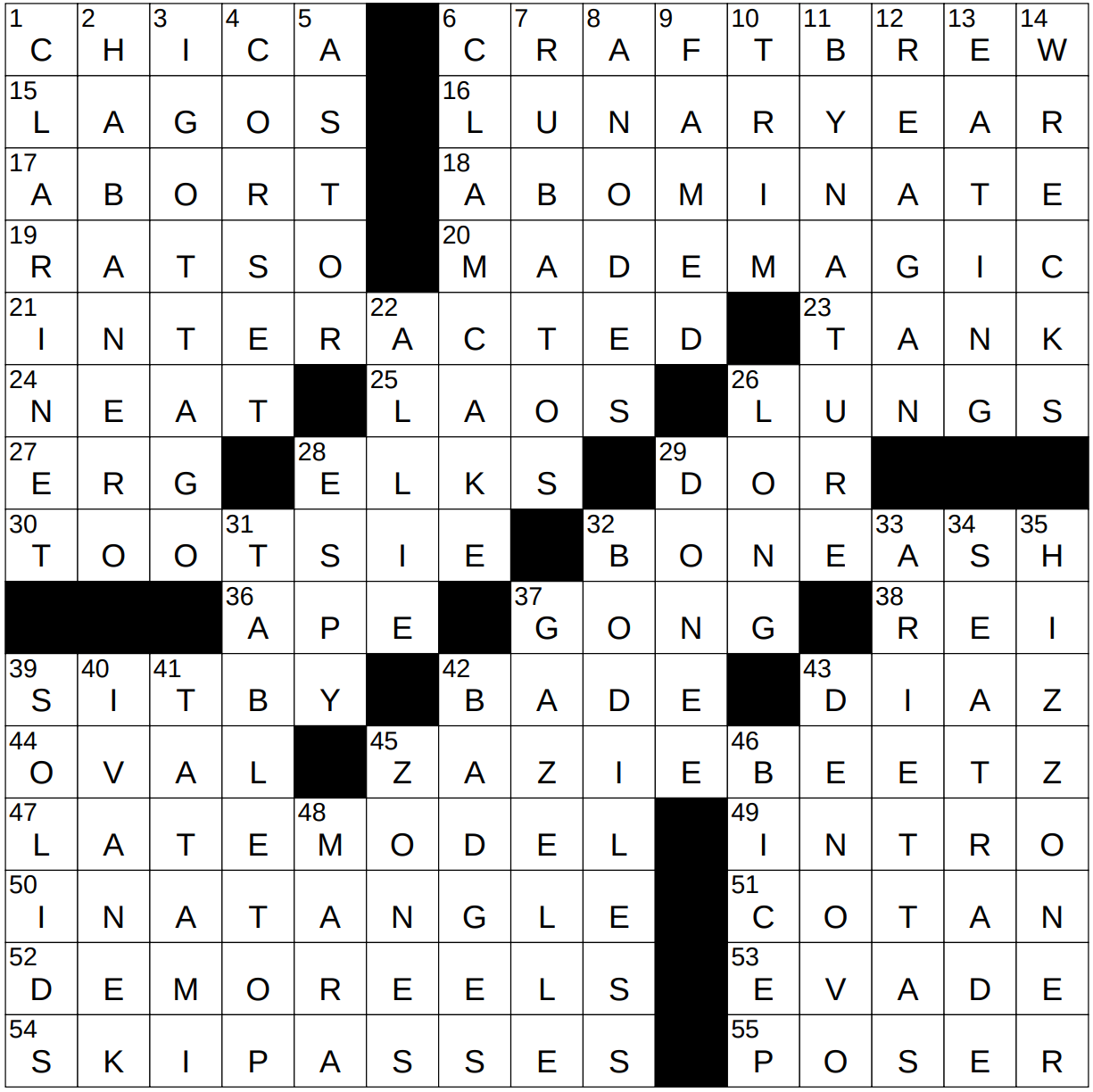 Lagos is a port and the biggest city in Nigeria. It used to be the country’s capital, until it was replaced in that role in 1991 by Abuja, a city built just for this purpose. Lagos is also the most populous city in the whole of Africa (followed by Cairo in Egypt).

16 What a snake or dragon can represent : LUNAR YEAR

25 Home of the Plain of Jars, a UNESCO World Heritage site : LAOS

The United Nations Educational, Scientific and Cultural Organization is better known by the acronym “UNESCO”. UNESCO’s mission is to help build peace in the world using programs focused on education, the sciences, culture, communication and information. The organization’s work is aimed in particular at Africa, and gender equalization. UNESCO also administers a World Heritage Site program that designates and helps conserve sites of outstanding cultural or natural importance to humanity across the world.

An indoor rowing machine is often referred to as an ergometer (or simply “erg”). However, the term “ergometer” really applies to a device that measures the amount of work performed.

32 Material in some china : BONE ASH

Bone china is so called because one of the main components is bone ash derived from animal bones.

43 Cameron with a star on the Hollywood Walk of Fame : DIAZ

45 Actress with an Emmy nomination for FX’s “Atlanta” : ZAZIE BEETZ

Zazie Beetz is a German-born actress who immigrated to New York City with her family as a young girl. Beetz is known for playing Vanessa “Van” Keefer on the comedy-drama show “Atlanta”, as well as the superhero Domino in the 2018 movie “Deadpool 2”.

51 Ratio of two sides in a right-angled triangle, in brief : COTAN

1 Wind known for its warmth : CLARINET

5 ___ Place, one of the original 28 stations of the New York City subway : ASTOR

“Tempo rubato” is a musical instruction encouraging the conductor or soloist to speed up and slow the tempo at his or her own discretion. Often singers and musicians vary the tempo anyway, giving the piece of music their own “imprint”.

14 Settings for some scuba dives : WRECKS

22 Holden’s brother in “The Catcher in the Rye” : ALLIE

An arietta, quite simply, is a short aria.

“HIizzoner” is a corruption of “His Honor”.