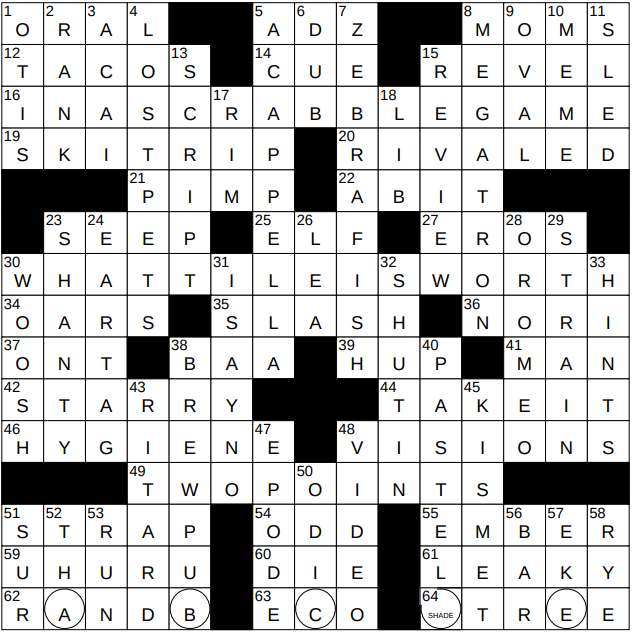 Constructed by: Daniel Bodily
Edited by: Will Shortz

Themed answers ask the question, “IN A SCRABBLE GAME, WHAT TILE IS WORTH TWO POINTS?” Five circled letters at the bottom of the grid seem to suggest the first five letters of the alphabet. The TWO-POINT letter of those five is “D”. And, answers crossing the “D” indicate that the “D” square should take something else, and what works is a rebus for ‘SHADE”:

A taco al pastor is a popular street food from Mexico that can also be found in parts of the US. The key ingredient in al pastor is sliced, spit-grilled pork. The cooking method, using a vertical spit, is one introduced into Mexico by Lebanese immigrants in the 1800s. The term “al pastor” translates from Spanish as “shepherd style”).

Park City in Utah is located just 30 miles or so southeast of Salt Lake City. Park City’s economy is very much dependent on tourism. It is home to two ski resorts: Deer Valley and Park City Mountain. It is also home to the annual Sundance Film Festival.

“Pimp My Ride” is a reality show that used to air on MTV, that was hosted by rap star Xzibit. The show covers the restoration of cars in poor condition.

Our term “dinghy” comes from the Hindi “dingi”, a word meaning “small boat”.

Hygieia was both the Greek and Roman goddess of health and cleanliness. She was a daughter of Asclepius, the Greek god of medicine. The name “Hygieia” gives us our contemporary term “hygiene”.

The Uhuru Movement is an organization that works for the cause of all native Africans and their descendants around the world. While focused mainly on the welfare and development of native Africans on the continent itself, another goal is the release of all African-American prisoners in US prisons. “Uhuru” is the Swahili word for “freedom”.

8 Leader of the Decepticons in the “Transformers” series : MEGATRON

10 Something shared a lot online : MEME

Mushing is the use of one or more dogs to pull a sled. “Mush” is thought to come from the French “marche” meaning “go, run”.

40 Hue such as pale mint or lilac : PASTEL SHADE

A “pastel” is a crayon made from a “paste” containing a powdered pigment in a binder. The term “pastel” can also be used to describe a work created using pastels.

Rit. (or sometimes ritard.) is the abbreviation for “ritardando”, a musical direction to slow down the tempo.

An epode is a lyric poem made up of couplets in which the first line is long, and the second line much shorter. The form was invented by the Greek poet Archilochus, and was most famously used by the Roman poet Horace.