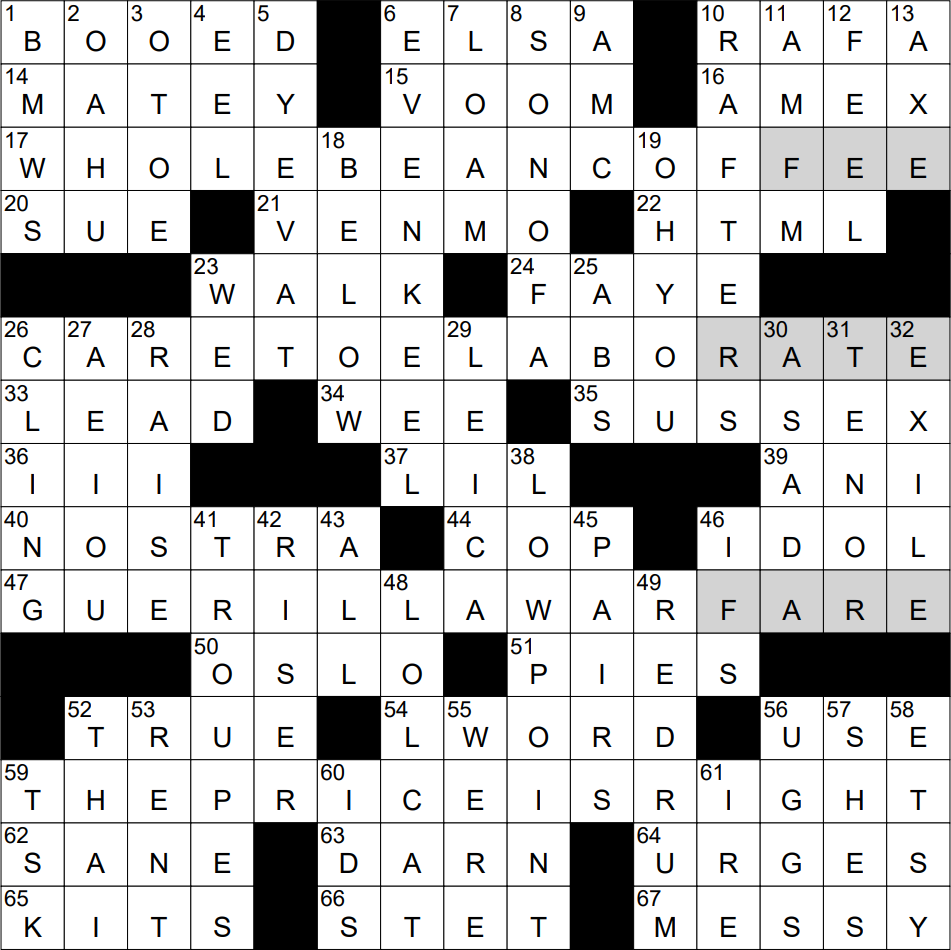 Constructed by: Garrett Chalfin
Edited by: Will Shortz

Themed answers each have a synonym of “PRICE” as a hidden word on the RIGHT, at the end:

“Va-va-voom!” is an expression that turns up in a lot of places. For example, it was a frequent utterance by comic actor Art Carney, most notably while playing Ed Norton in the sitcom “The Honeymooners” from the 1950s. Carney even released a comedy song “Va Va Va Voom” in 1954.

21 Payment app whose name is now a verb : VENMO

Harry, Duke of Sussex is the younger of the two sons of Charles and Diana, Prince and Princess of Wales. Famously, Prince Harry married American actress Meghan Markle in 2018. The groom’s name was Prince Henry of Wales until the marriage, at which time his name officially changed to “Prince Harry”. In January 2020, Harry and Meghan stepped back from their official duties.

36 Three on a grandfather clock : III

“Li’l Abner” was created and drawn by Al Capp for over 43 years starting in 1934. Al Capp stopped producing the strip in 1977, largely due to illness (he died from emphysema two years later). As the strip finished up, he went so far as to apologize to his long-standing fans, saying that he should have stopped 3-4 years earlier as he felt that the quality of his work had gone down in those latter years. The title character’s full name is “Li’l Abner Yokum”. Despite being referred to as “Li’l”, Abner is 6’ 3” tall.

Guerrilla (sometimes “guerilla”) warfare is a type of fighting engaged in by irregular forces using ambushes and sabotage. The term “guerra” is Spanish for war, and “guerrilla” translates as “little war”.

“Viet Cong” was the name of the political and military organization based in South Vietnam that fought the US and South Vietnamese government during the Vietnam War. The American military referred to the Viet Cong as “the VC”. “VC” could be extended to “Victor Charlie” in the phonetic alphabet, and this was shortened to “Charlie”, which became a military slang term for the Viet Cong and other Communists.

“The Price is Right” is a television game show that first aired way back in 1956.

“Compos mentis” is a Latin phrase that translates as “in command of one’s mind”. It is a term used in contemporary law.

A tenor (plural “tenori”) is a male voice that falls between that of a countertenor and a baritone. The word “tenor” comes from the Latin “tenere” meaning “to hold”. This etymology refers to the tenor part that carries the sustained melody (canto fermo) of a traditional polyphonic composition.

41 Word that would seem to be a portmanteau of “traveling groups,” but isn’t : TROUPES

In the 1980 movie “The Shining”, there is a young boy called Danny who has the gift of ESP and who has a bad feeling about the hotel where he and his family are to live. At one stage, Danny calls out the word “redrum” and then goes into a trance. “Redrum” is “murder” spelled backwards.