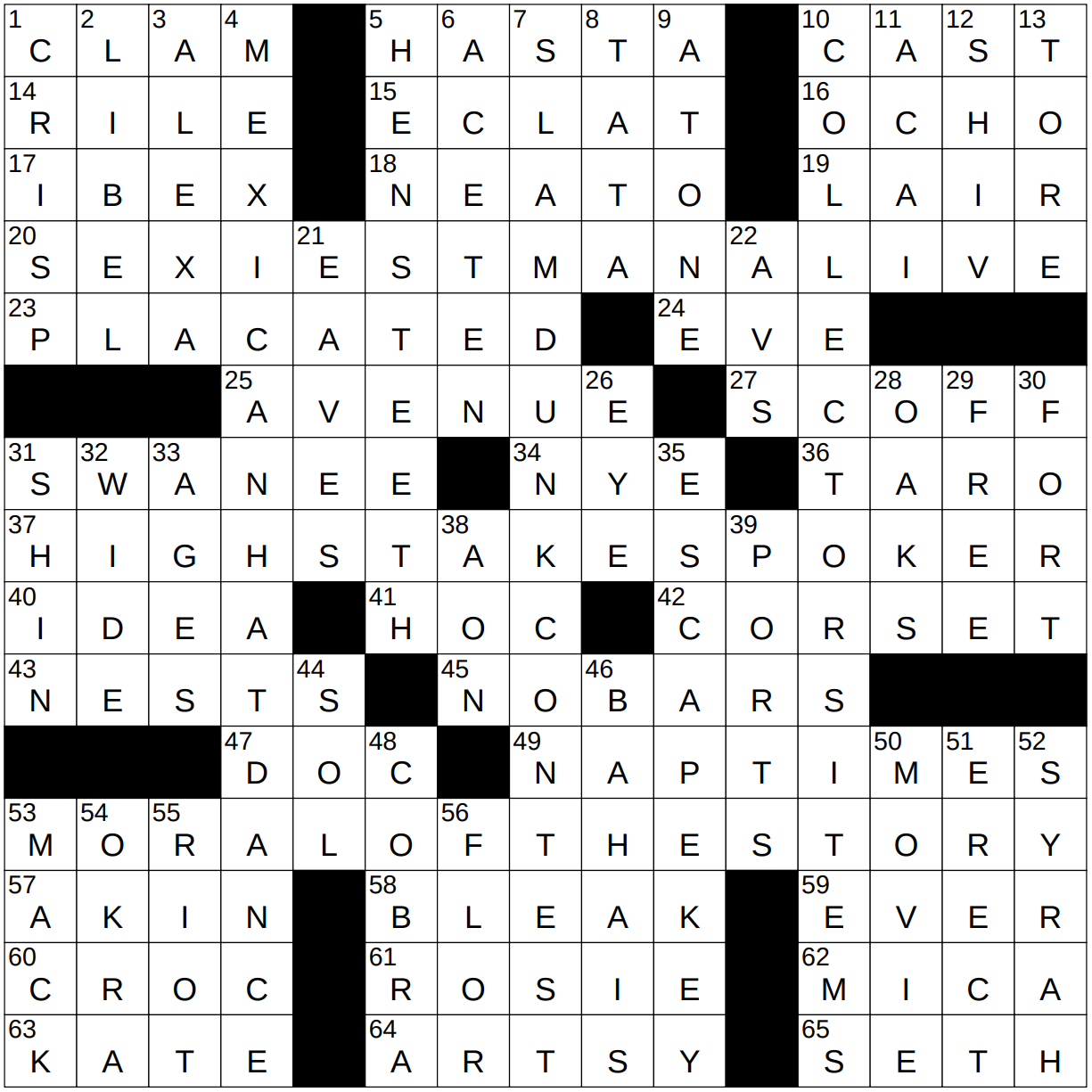 Constructed by: David Karp
Edited by: Will Shortz

Eve Ensler is a playwright whose most famous work is “The Vagina Monologues”. When Ensler was only 23 years of age, she adopted a 15 year old boy. We are familiar with that boy on the big screen these days; actor Dylan McDermott.

That would be cell service.

47 Something to be filed, in brief : DOC

58 Like the mood fostered by “Waiting for Godot” : BLEAK

Crocs are foam clogs that were originally designed as shoes to be worn at health spas. I recently bought my first pair of crocs, and now my kids won’t talk to me …

On “The Jetsons” animated TV show, the character Rosie the Robot was voiced by Jean Vander Pyl. Vander Pyl was also the voice actress behind Wilma Flintstone in “The Flintstones”

Seth Rogen is a Canadian comedian who got a lot of credit for his supporting role in “The 40-Year-Old Virgin”. That led to him being cast as the lead in the 2007 film “Knocked Up”. Rogen also co-directed and co-starred in “The Interview”, a movie that created a huge ruckus in the North Korean regime.

“Steve Jobs” is a 2015 biographical film about the life of the Apple co-founder. The film is based on an excellent biography of the same name by Walter Isaacson. Michael Fassbender plays Jobs, and Seth Rogen plays Apple co-founder Steve Wozniak. Aaron Sorkin wrote the screenplay, which is always a good thing as far as I’m concerned. I’m going to have to put this film on my watch list …

Steve “Woz” Wozniak was one of the founders of Apple Computer, along with Steve Jobs and Ronald Wayne. Wozniak was the driving force behind the creation of the Apple I and Apple II computers that revolutionized the computer market in the seventies.

Something might be described as scarcer than hens’ teeth, as hens don’t have teeth at all!

The Colorado Avalanche is a professional ice hockey team based in Denver, Colorado. The Avalanche were founded in Quebec in 1972 as the Quebec Nordiques, and moved to Denver in 1995.

28 They may throw shade : OAKS

The oak was named the official National Tree of the US in 2004. It is also the national tree of many countries around the world, including England, France, Germany, Jordan, Poland, Serbia and Wales.

39 Boston and San Francisco, but not Denver : PORTS

Boston is the capital of the state of Massachusetts. The city was founded by Puritan colonists from England in 1630. The city takes its name from Boston, England from where several of the early Puritan settlers hailed.

A solar day on Mars is referred to as a “sol” by astronomers. One sol is equivalent to just under 24 hours 40 minutes here on Earth.

46 Religious adherents governed by the Universal House of Justice : BAHA’IS

48 One with a forked tongue : COBRA

Marshmallow was originally made from a paste from the root of the mallow plant. The mallow plant grows near salt marshes, and is sometimes called the “marsh mallow”. Hence the name of the confection. Interesting, but unexpected …