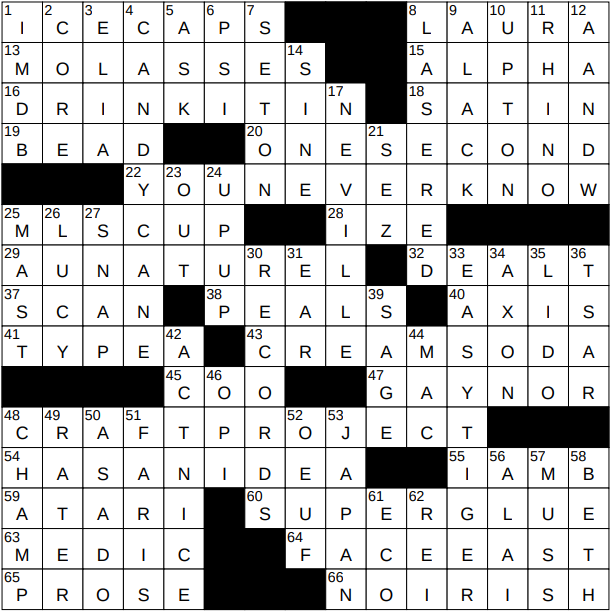 Constructed by: Juliana Tringali Golden
Edited by: Will Shortz

1 Poles have them : ICE CAPS

29 In the altogether : AU NATUREL

A CT (or “CAT”) scan produces (via computer manipulation) a three-dimensional image of the inside of an object, usually the human body. It does so by taking a series of two dimensional x-ray images while rotating the camera around the patient. The issue with CT scans is that they use x-rays. High doses of radiation can be harmful, causing damage that is cumulative over time. The initialism “CT” stands for “computed tomography”. The older initialism “CAT” stands for “computed axial tomography”.

59 Immediate threat to capture, in a game of Go : ATARI

Go is a strategy board game that was invented in China over 5,500 years ago. Go’s name in Chinese translates as “encircling game”, which reflects the objective of surrounding the largest area on the board.

Super Glue and Krazy Glue are trademarks for the fast-acting cyanoacrylate adhesive, which are also known generically as “super glues”.

4 Treat with a hook : CANDY CANE

A wave function in quantum mechanics is usually denoted with the Greek letter psi. It is a mathematical function that describes the quantum state of a particle and how it behaves.

10 Kate on the cover of Vanity Fair’s 100th-anniversary issue : UPTON

Kate Upton is a fashion model from St. Joseph, Michigan. Kate is a niece of US Representative Fred Upton of Michigan. Kate married professional baseball pitcher Justin Verlander in 2014.

26 Leading role in “Being the Ricardos” : LUCY

“Being the Ricardos” is a 2021 biopic about the lives of married couple Lucille Ball and Desi Arnaz. Lucy and Desi are played by Nicole Kidman and Javier Bardem. The title comes from the show “I Love Lucy”, in which Ball and Arnaz played Lucy and Ricky Ricardo. I haven’t seen this one, but it’s on my list as the film was written and directed by the great Aaron Sorkin …

The Winter Palace is a magnificent building in St. Petersburg in Russia that was home to the Russian tsars (and tsarinas). Today, the Winter Palace houses the famous Hermitage Museum. I was lucky enough to visit the Palace and museum some years ago, and I have to say that I have rarely been more impressed by a historical building.

The burning of sage is known as “smudging”. It is a ritual that originated with many Native-American peoples, although similar practices are found around the world in other cultures. The most common type of sage used in smudge sticks (sage bundles) is white sage, Salvia apiana.

That would be the Apple operating system.

In much of South America, the event we know as a barbecue is referred to as an “asado”, with “asado” translating from Spanish as “roast”. The “asador” is the “roaster”, the person roasting the meat.

Comic actress Anna Faris broke through to the big time when she landed a leading role in the 2000 horror parody “Scary Movie”. She reprised that “Scary Movie” role in three sequels. TV audiences will likely recognize Faris as the main character in the sitcom “Mom”. Faris was married to fellow actor Chris Pratt from 2009 until 2018.

“Mom” is a sitcom, starring Anna Faris and the great Allison Janney, that premiered in 2013. Famously, the show deals head on with the problems of alcoholism and drug abuse.