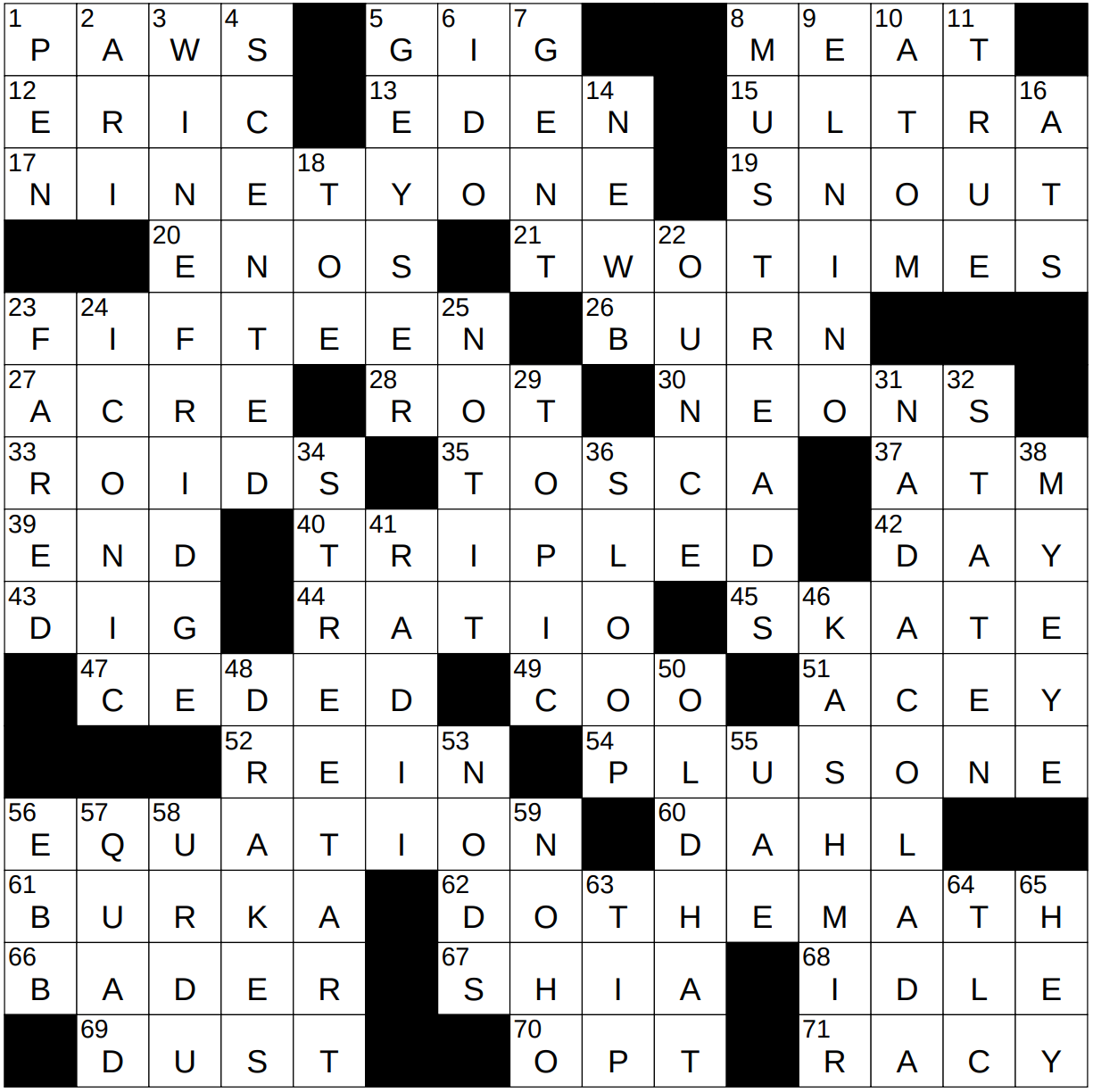 Today’s Reveal Answer: Do the Math

Themed answers are parts of a MATH EQUATION:

Eric Idle is one of the founding members of the Monty Python team. He was very much the musician of the bunch, and is an accomplished guitarist. If you’ve seen the Monty Python film “The Life of Brian”, you might remember the closing number “Always Look on the Bright Side of Life”. It was sung by Idle, and was also written by him. That song made it to number-3 in the UK charts in 1991.

Mireille Enos is an actress from Kansas City. She is perhaps best known for her TV work, playing Sarah Linden on “The Killing” and for playing twins Kathy and JoDean Marquart on “Big Love”. Enos is married to actor Alan Ruck, who I mainly remember playing Cameron Frye in the great movie “Ferris Bueller’s Day Off”.

23 What comes after love : FIFTEEN

Acey-deucey is a fast-played variant of backgammon. Apparently, the game has been a favorite with members of the armed forces since the days of WWI.

A burqa (also “burka”) is the garment worn by some women in the Islamic tradition to cover up their bodies when in public.

Chase Field in Phoenix is the home of the Arizona Diamondbacks MLB team. The stadium opened in 1998 as Bank One Ballpark, which earned it the nickname “BOB”. The name changed in 2005 following the merger of Bank One with JPMorgan Chase. Chase Field has a natural grass playing surface, and a retractable roof. The roof is kept open almost all the time, and is only closed for games when the temperature needs to be dropped using the stadium’s massive air conditioning plant.

“Noob” (sometimes “newb”) is a not-so-nice slang term for a “newbie”, and often refers to someone who is new to an online community.

Kashmir is a vast region in the northwest of the Indian subcontinent. It has a long and rich history, but the year that is most significant today is perhaps 1947. In that year, Britain pulled out of the Indian subcontinent. The British divided the Indian Empire into the independent countries of India and Pakistan, leaving the Maharajah ruling Kashmir and free to join either India or Pakistan. When the Kashmiri Maharajah wavered in his decision, Pakistani forces advanced into Kashmir, prompting the Maharajah to turn to India for assistance. India did indeed help, but only on condition that Kashmir accede to India. India then called in the United Nations to intercede, but no definitive solution was found that brought peace to the region. There has been conflict there ever since.

The quadriceps femoris is the muscle group at the front of the thigh. It is the strongest muscle in the human body, and is also the leanest. The “quads” are actually a group of four muscles in the upper leg, hence the use of the prefix “quad-”.

59 N.Y.C. neighborhood bounded by the Bowery to the east : NOHO