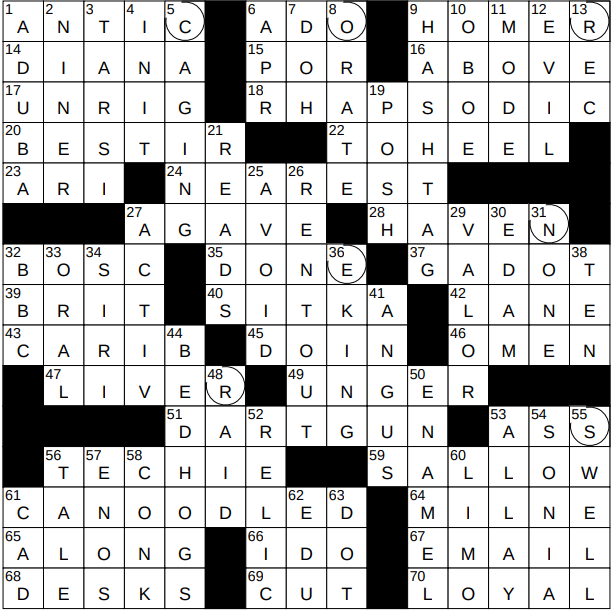 Constructed by: Bill Pipal & Jeff Chen
Edited by: Will Shortz

Themed answers in the across-direction seem to make no sense at first. We have to CUT out the circled letters, which spell “CORNERS”, and realize that across-answers turn a CORNER and finish in the down-direction. Very devious …

WNBA player Diana Diana Taurasi was the first pick in the 2004 draft, and signed up with the Phoenix Mercury. That first season, she won the league’s Rookie of the Year Award, the first of many, many awards in her career, including five Olympic gold medals.

The Arizona Diamondbacks (also “D-backs”) joined Major League Baseball’s National League in 1998. By winning the World Series in 2001, the Diamondbacks became the fastest expansion team to do so in Major League history.

The Rumble in the Jungle was the celebrated 1974 fight between Muhammad Ali and George Foreman that took place in Zaire (now the Democratic Republic of the Congo). The fight was set in Zaire because of financial arrangements between promoter Don King and Zaire’s President Mobutu Seko. Ali coined the term “rope-a-dope” to describe his incredibly successful strategy in the contest. From the second round onwards, Ali adopted a protected stance on the ropes letting Foreman pound him with blows to the body and head, with Ali using his arms to dissipate the power of the punches. He kept this up until the eighth round, and then opened up and downed the exhausted Foreman with a left-right combination. I hate boxing but I have to say, that was an interesting fight …

Live Aid was a concert held in 1985 to raise funds for famine victims in Ethiopia. It was held simultaneously in London and Philadelphia, and was organized by Bob Geldof and Midge Ure. Almost 2 billion people watched the live broadcast.

The noun “boot” was once used to describe something of advantage in trying to accomplish a goal. This obsolete term really only exists in the adverb “to boot” meaning “in addition, over and above”, literally “to advantage”.

64 Creator of Heffalumps and Woozles : MILNE

11 Most frequent number, in math : MODE

12 “May the forces of ___ become confused on the way to your house”: George Carlin : EVIL

No one really knows the etymology of the word “posh”. The popular myth that “posh” is actually an acronym standing for “port out, starboard home” is completely untrue, and is a story that can actually be traced back to the 1968 movie “Chitty Chitty Bang Bang”. The myth is that wealthy British passengers traveling to and from India would book cabins on the port side for the outward journey and the starboard side for the home journey. This trick was supposedly designed to keep their cabins out of the direct sunlight.

Arthur Miller was a remarkable playwright, best known for his plays “Death of a Salesman” and “The Crucible”. Famously, Arthur Miller left his first wife to marry Marilyn Monroe in 1956. The two divorced five years later, just over a year before Monroe died of an apparent drug overdose.

32 Largest TV network in the world, by number of employees : BBC

The marvelous British Broadcasting Corporation (BBC) is mainly funded by the UK government through a television “licence” (British spelling, as opposed to “license”!) fee that is levied annually on all households watching TV transmissions.

38 What you get when you put your hands together? : TEN

Those would be ten fingers.

Tooth enamel covers the crowns of our teeth. Tooth enamel is the hardest substance in the human body. It is composed of 96% crystalline calcium phosphate.

52 One of many in Indiana Jones’s possession : RELIC

The title character in the “Indiana Jones” series of movies was born Henry Jones, Junior in Princeton, New Jersey. He adopted the nickname “Indiana” because that was the name of his dog when he was growing up. George Lucas, who created the character, used to have an Alaskan malamute dog named Indiana.

“The Canterbury Tales” is a collection of stories penned by Geoffrey Chaucer at the end of the 14th century. Written in MIddle English, the tales are presented as a storytelling contest held by a group of pilgrims as they travel from London to the shrine of Saint Thomas Becket in Canterbury Cathedral. “The Canterbury Tales” is often cited as a landmark piece of English literature as it popularized the use of vernacular English, as opposed to the French or Latin works that were commonly published up to that time.