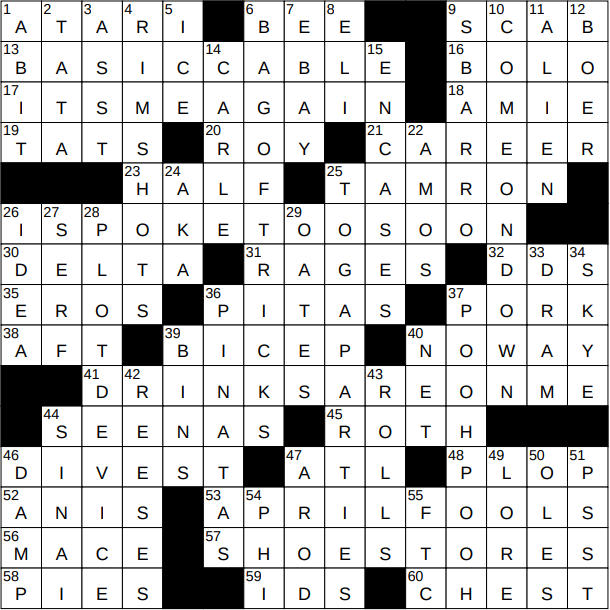 A machete is a large knife, one usually 13-18 inches long. The term “machete” is the diminutive of “macho” meaning “male, strong”.

NBC’s “Today” was launched in 1952, becoming the first of the morning news/talk shows on US television. The show’s first host was Dave Garroway, who was at the helm until 1961. Back in those days, “Today” had a mascot who often appeared on air with Garroway: a chimpanzee named J. Fred Muggs.

30 Area around the mouth : DELTA

39 It looks better with curls : BICEP

58 Dishes served in the final scene of “Titus Andronicus” : PIES

The name “Eli” is a hidden word in the phrase “state lines”.

“Boer” is the Dutch and Afrikaans word for “farmer”, and a word that was used to describe the Dutch-speaking people who settled parts of South Africa during the 1700s.

22 First Hebrew prophet to have a biblical book named for him : AMOS

28 Red herring, for one : PLOT DEVICE

34 Isle along the Sound of Sleat : SKYE

That must be a hairnet.

44 Land between the Gulfs of Aqaba and Suez : SINAI

54 It’s written as a vertical line bisecting a circle : PHI