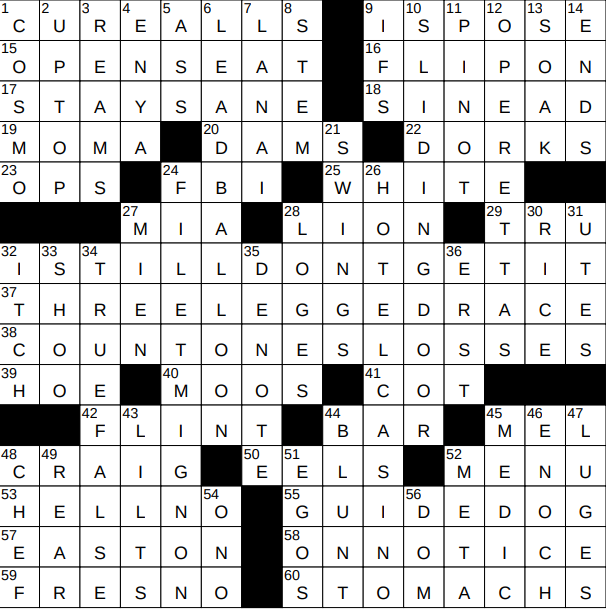 Constructed by: Lance Enfinger
Edited by: Will Shortz

The TV crime drama “FBI” premiered in 2018, and centers on the FBI office in New York City. Star of the show is Canadian actress Missy Peregrym, who plays FBI special agent Maggie Bell.

There are a few sporting teams with a mascot named “Roary the Lion”. Here in the US, Roary is the mascot of the Detroit Lions football team. Over in the UK, there are mascots named Roary for the Middlesbrough soccer club, as well as the England and Wales Cricket Board.

The larger-than-life Truman “Tru” Capote was an author and comedian. Capote is perhaps most associated with his novella “Breakfast at Tiffany’s” and his true crime novel “In Cold Blood”. Truman Capote grew up in Monroeville, Alabama. There he met, and became lifelong friends with, fellow novelist Harper Lee. Capote was the inspiration for the character “Dill” in Lee’s celebrated work “To Kill a Mockingbird”. In turn, Harper Lee was the inspiration for the character “Idabel” in Capote’s “Other Voices, Other Rooms”.

42 Material for a lighter wheel : FLINT

Flint is a form of the mineral quartz. Flint can be used to start a fire. The hard edge of flint when struck against steel can shave off a particle of the metal. The particle of steel contains exposed iron that reacts with oxygen in the air creating a spark that can light dry tinder.

“Mel” can be a nickname for “Melvin”.

English actor Daniel Craig rocketed to fame in 2005 when he was chosen to replace Pierce Brosnan as James Bond in the series of films based on Ian Fleming’s character. One of Craig’s most famous appearances as Bond was alongside Queen Elizabeth II in the opening ceremony of the London 2012 Olympics. Craig married actress Rachel Weisz in 2011.

Here are the first seven actors to portray the iconic English spy in the “James Bond” series of movies:

Like so many famous cocktails, the actual origins of the cosmopolitan are disputed. It is a very nice drink, in my humble opinion. One of the standard recipes is 4 parts citrus vodka, 1.5 parts Cointreau, 1.5 parts lime juice and 3 parts cranberry juice.

“Iolanthe” is a Gilbert & Sullivan comic opera that was first staged at the Savoy Theatre in London in 1882. The opera features a group of fairies who come into conflict with Britain’s House of Lords. “Iolanthe” satirizes many aspects of the country’s government of the day.

“Candide, ou l’Optimisme” is a 1759 satirical novella by the French philosopher Voltaire. “Candide” was adapted into an operetta with music by American composer Leonard Bernstein.

21 Tires out in a playground, perhaps : SWINGS

Those would be tires used as swings.

The filet mignon cut of beef is taken from muscle in the back of the cow. That muscle is not load-bearing and contains very little connective tissue, which makes it more tender as meat. The name “filet mignon” translates as “tender/delicate slice”.

In the tobacco industry, a blunt is a cigar of medium width that has a rounded rather than a pointed tip. It is the rounded end of the cigar that gives it the name “blunt”. A cigar that has been hollowed out and filled with cannabis is also known as a blunt.

45 Member of a triage team : MEDIC

54 Hawaiian word for a mackerel : ONO

A wahoo is a cousin of a mackerel, and is known as an “ono” in Hawaii.