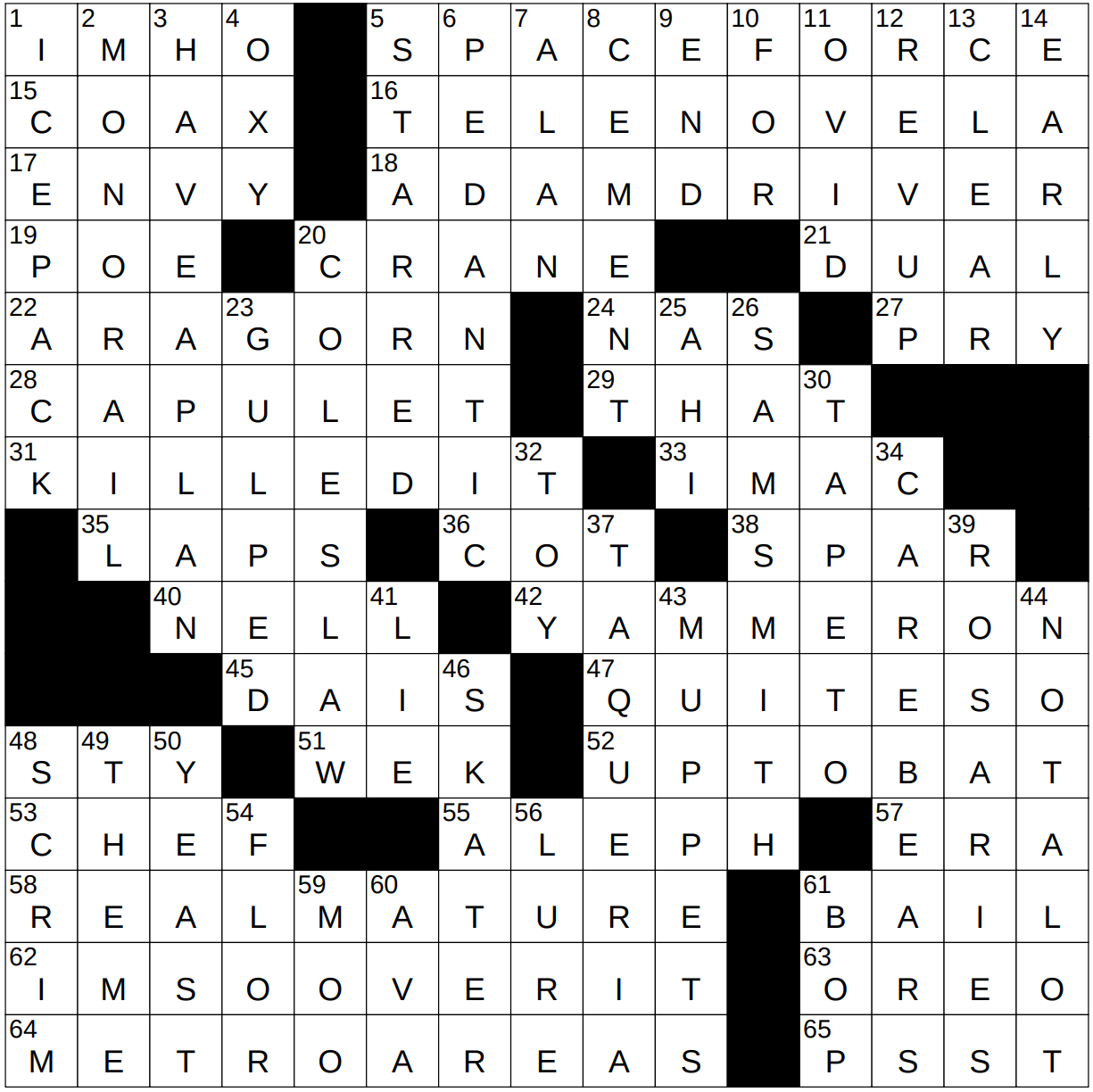 The United States Space Force (USSF) was established in 1982 as the Air Force Space Command. The USSF became an independent service branch in 2019, although it still falls under the Department of the Air Force.

Celebrated American writer Edgar Allan Poe (EAP) was born “Edgar Poe” in 1809 in Boston. Poe’s father abandoned Edgar and his two siblings after the death of their mother. As a result, Edgar was taken into the home of the Allan family in Richmond, Virginia. His foster parents gave the future author the name “Edgar Allan Poe”.

Viggo Mortensen is a Danish-American actor who is famous for playing Aragorn in “The Lord of the Rings” movies. Mortensen was born in New York City and lived for periods in the US and periods in Denmark when he was younger. He is fluent in English, Danish and also Spanish.

28 Surname of a star-crossed lover : CAPULET

Nell Carter was a singer and actress from Birmingham, Alabama. Carter won a Tony for her performance on Broadway in “Ain’t Misbehavin’”. She also starred in the TV sitcom “Gimme a Break!” in the 1980s.

55 What comes before a bet : ALEPH

In 2012, President Barack Obama visited Walt Disney World in Florida. He was there on official government business, and included a reference to Mickey Mouse in his speech:

And I confess, I am excited to see Mickey. It’s always nice to meet a world leader who has bigger ears than me.

Stridex is a line of acne treatments owned by Blistex that comes as medicated pads. The active ingredient in most Stridex products is salicylic acid, but others include benzoyl peroxide.

“Succession” is a very popular dark comedy-drama series that premiered in 2018. It’s about a family-owned, global media company. The “succession” in question is who will get to run the empire after the passing of the ailing family patriarch. The marvelous Scottish actor Brian Cox plays the head of the company Logan Roy.

8 Place for a handprint, maybe : CEMENT

25 Source of protein in a poke bowl : AHI

Sam Smith is a singer from London. I think that the only recording I’ve heard of there’s is “Writing’s on the Wall”, which is the theme song from the 2015 James Bond movie “Spectre”.

37 Place where shells are put away? : TAQUERIA

In Spanish, one might order “pollo” (chicken) at “una taquería” (a restaurant specializing in tacos).

43 Rowlf the Dog and Robin the Frog, for two : MUPPETS

“Scrim” is the name given to that transparent fabric that hangs down onto a theater’s stage. It is often used with special lighting for various effects.