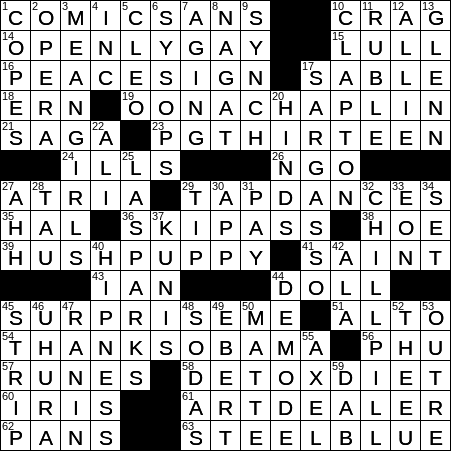 Constructed by: Trenton Charlson & David Steinberg
Edited by: Will Shortz

Comic Sans MS is a font that looks a bit like that used in old comic books. Comic Sans was released by Microsoft in 1994. If you live in the Netherlands, you are lucky enough to enjoy Comic Sans Day on the first Friday of July each year.

16. Symbol created in 1958 as the logo for the Campaign for Nuclear Disarmament : PEACE SIGN

The peace symbol that we tend to use today was born in the 1950s. It was originally created as the logo for the Campaign for Nuclear Disarmament (CND), an organization based in the UK. The CND symbol was designed by artist Gerald Holtom for a 1958 protest march from Trafalgar Square in London to the Atomic Weapons Research Establishment at Aldermaston in Berkshire, England. The use of the symbol simply spread throughout the world and was used by other disarmament and antiwar activists.

The expression “goody two-shoes” is used for someone who is virtuous, but in a smug way. The term comes from a nursery tale published in 1765 called “The History of Goody Two-Shoes”. Goody Two-Shoes is the heroine of the tale, and actually isn’t smug at all. Instead, she is a Cinderella-like character in a retelling of the Cinderella story.

The Andes range is the longest continuous chain of mountains in the world. It runs down the length of the west coast of South America for about 4,300 miles, from Venezuela in the north to Chile in the south. The highest peak in the Andes is Mt. Aconcagua, at an elevation of 22,841 feet. Interestingly, the peak of Mt. Chimborazo in Ecuador is the furthest point on the Earth’s surface from the center of the planet. That’s because of the equatorial “bulge” around the Earth’s “waist”.

The Battle of Điện Biên Phủ was fought in Vietnam in 1954 at the height of the First Indochina War. The war was between the occupying French forces and the Viet Minh revolutionaries, with the battle resulting in a resounding defeat for the French. The war ended with the signing of the 1954 Geneva Accords just a few months after the battle, after which France made a complete withdrawal from Vietnam. There was no peace though, with the Second Indochina War following a few years later, better known in the US as the Vietnam War.

57. Some “Lord of the Rings” characters : RUNES

An art dealer might be the victim of a forger, a forger’s “mark”.

10. Only three-time inductee into the Rock and Roll Hall of Fame : CLAPTON

The ruble (also “rouble”) is the unit of currency in Russia, as well as in several other countries in the former Soviet Union. One ruble is divided into one hundred kopecks (also “kopeks”).

The oldest currency in the world that is still in use is the British pound.

17. Sea with no land boundaries : SARGASSO

The Los Angeles Sparks women’s basketball team was founded just before the WNBA opened its doors for business in 1997.

28. Greek letter that once symbolized life and resurrection : TAU

“Démodé” is a French word meaning “no longer in fashion”.

49. He said “I learned to be a movie critic by reading Mad magazine” : EBERT

The European Union (EU) won the Nobel Peace Prize in 2012 “for over six decades contributed to the advancement of peace and reconciliation, democracy and human rights in Europe.”