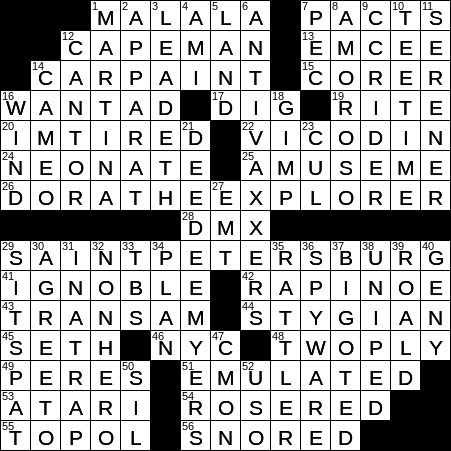 “I Am Malala: The Story of the Girl Who Stood Up for Education and Was Shot by the Taliban” is a memoir co-written by Malala Yousafzai and British journalist Christina Lamb. The title tells the essence of her Malala’s story. She started a blog when she was 11 or 12, outlining her life in northwest Pakistan under occupation by the Taliban. As the Pakistani military regained control of the area, Malala’s story was told in a documentary and she was frequently giving interviews. One day a gunman came looking for her, and found her on a school bus. He shot Malala three times, with one bullet going into her forehead. She survived, and was taken to England to recuperate. She was a co-recipient of the Nobel Peace Prize in 2014 at the age of 17, making her the youngest ever Nobel laureate.

Vicodin is a brand name of pain-reliever. The formulation is a mixture of two ingredients: hydrocodone (an opiate) and acetaminophen (a non-opiate analgesic).

“DMX” and “Dark Man X” are stage names used by rap artist Earl Simmons. DMX’s biggest hit is “Party Up (Up in Here)” released in 1999 (and even I know that song!). DMX seems to get in trouble with the law a lot, an awful lot …

“Crime and Punishment” is one of the two most famous novels by Russian author Fyodor Dostoevsky, the other being “The Brothers Karamazov”.

“Stygian” is such a lovely word! Meaning “gloomy, dark” or “infernal, hellish”, it is an adjective coming from the River “Styx”.

New York City served as the capital of the United States from 1785 until 1790. The seat of government back then was Federal Hall, located on Wall Street. It was here that George Washington was inaugurated as the country’s first President, in 1789.

53. Company that once had tremendous “quarterly” profits? : ATARI

Those would be quarters going into video game machines.

Martina Hingis is a retired Swiss tennis player and former World No. 1 professional. She retired in 2007 after testing positive for cocaine during Wimbledon, although she denied using the drug.

Martina Navratilova is a retired tennis player who is thought by many to have been the greatest player of all time. Navratilova won the Wimbledon singles title a record nine times, which is one of many records that she holds. She was born in Czechoslovakia but asked for political asylum in the US in 1975 at 18 years of age. Navratilova was granted temporary residency in the US and as a result was stripped of her Czech citizenship. That Czech citizenship was restored in 2008, making her a dual citizen.

An apparat is a political power structure. The term “apparat” comes into English via Russian ultimately from the Latin word “apparatus” meaning “tools”. The use of “apparat” is usually derogatory due to the terms’ historical association with the oppressive communist political structure that held sway in the Soviet Union.

6. Ones not calling the shots? : ANTI-VAXXERS

“Anti-vaxxers” is a term that applies to members of the anti-vaccination movement.

“Amoroso” is the Italian word for “lovingly”, and is used as a direction on a musical score.

9. Classic blues song with the line “I’d rather be dead than to stay here and be your dog” : CC RIDER

Chuck Willis was an R&B singer from Atlanta, Georgia. Willis had a number-one hit in 1957 with the blues classic “C. C. Rider”, a song which inspired a popular new dance called ‘The Stroll”. His association with the Stroll led to Willis getting the nickname “the King of Stroll”.

“Canto” is the Latin word for “singer”. In some religious traditions, a “cantor” is the person assigned to lead the singing of ecclesiastical music.

The term “gimp” emerged in the 1920s, describing a lame leg. Within a few years, the usage extended to describe a person with a lame leg. I think that nowadays, such a usage is considered quite derogatory and is best avoided.

Dee Dee Myers was a very capable White House Press Secretary in the first two years of the Clinton administration, and was the first woman to hold that post. After leaving the White House, Myers acted as a consultant on the TV show “The West Wing”, and I am sure helped add that touch of authenticity to a great television program.

27. Graduate of a Red Cross training course, for short : EMT

35. One letting you know before going for a bite? : RATTLER

40. Millennials, by another name : GEN-Y