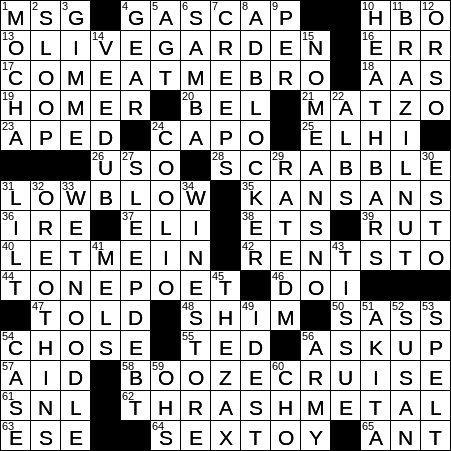 “Westworld” is an HBO series that is based on a 1973 movie of the same name, which was written and directed by novelist Michael Crichton. Westworld is a high-tech theme park populated by androids that interact with the guests.

Olive Garden is a chain of Italian-American restaurants that has over 800 locations worldwide. The chain was originally established as part of General Mills. The current owners of the chain also operate Red Lobster restaurants. Apparently there are plans to co-located Olive Garden and Red Lobster eateries so that they have separate entries but share kitchens.

Bel Air is a ritzy neighborhood in Los Angeles that was once home to many, many stars of film and television. Famously, the sitcom “The Fresh Prince of Bel Air” was set in the neighborhood. President Ronald Reagan and Nancy Reagan had a home in Bel Air, and in fact the former president passed away there in 2004.

Matzo is an unleavened bread that is very brittle. The bread is crushed, creating Matzo meal that is then formed into balls using eggs and oil as a binder. The balls are usually served in a chicken stock.

Our word “pantomime” comes from the Greek word “pantomimos” meaning “actor”. The literal translation of the Greek is “imitator of all”, from “panto-” (all) and “mimos” (imitator). We use the term today to describe communication by means of facial expression and physical gestures. On the other side of the Atlantic, pantomimes (often “pantos”) are also very popular Christmas entertainments based on nursery tales like “Mother Goose”, “Aladdin” and “Jack and the Beanstalk”. Great, great stuff …

Tornado Alley has no precisely defined boundaries, but it generally lies between the Rockies and the Appalachians. It is so named because it is the area in the US where tornadoes occur most frequently.

38. Figures in some “Twilight Zone” episodes, for short : ETS

The iconic television series “The Twilight Zone” first aired in 1959 and then ran for 156 episodes before being pulled in 1964. “The Twilight Zone” was revived for four years in the late eighties, and was also spun-off into a movie by Steven Spielberg in 1983.

The Brazil nut tree is native to South America, however, the largest exporter of Brazil nuts isn’t Brazil but is in fact Bolivia. And, the Brazil nut isn’t actually a nut in the strict sense of the word and instead is a seed (as opposed a hard-shelled fruit).

Call of Duty is a incredibly successful series of video games that started out life on computers and is now available for gaming consoles and handhelds. The first version of this war game was set in WWII, but other versions feature the likes of “Modern Warfare” and “Black Ops”.

“The Zax” are a pair of characters who appear in “The Sneetches and Other Stories” by Dr. Seuss. “The Zax” is actually the title of one of the four stories in the collection.

52. Elder of the sisters who visited Narnia in “The Chronicles of Narnia” : SUSAN

In the C.S. Lewis novel “The Lion, the Witch and the Wardrobe”, four siblings visit the magical land of Narnia via a wardrobe in the spare room of house in which they are living while evacuated during WWII. The children are Lucy, Edmund, Susan and Peter Pevensie.

Both “spelled” and “spelt” are valid past tenses for the verb “to spell”, although the former is way more common on this side of the Atlantic. I grew up with “spelt” on the other side of the pond, but its usage is rapidly being replaced by “spelled” in the UK and Ireland.

Army ants are a collection of over two hundred different species of ants. Each species is known for aggressively raiding a certain area en masse, foraging for food. Army ants also stay on the move, never building permanent nests.

There used to be two varieties of Oh’s made by Quaker Oats Company. One was Honey Nut Oh’s (later known as Crunchy Nut Oh’s), but it was phased out. The second type was called Crunchy Graham Oh’s, and it is still available today as Honey Graham Oh’s.