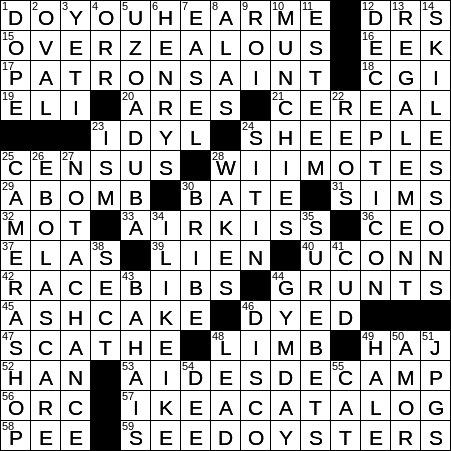 In the Roman Catholic and Protestant traditions, Joseph is honored as the patron saint of workers.

An “idyll” (also “idyl”) is a short poem with a pastoral theme, usually depicting the scene in romantic and idealized terms. The word comes from the Greek “eidyllion”, which literally translates to “little picture” but was a word describing a short, poem with a rustic theme.

25. Event for an enumerator : CENSUS

To bate is to restrain, as in “with bated breath” meaning “with restrained breath”. The term can also mean to lessen, and is a shortening of “abate”.

The slang term “grunts”, meaning “low-level personnel”, first applied to US infantrymen during the Vietnam War. The equivalent term for British infantrymen is “squaddies”.

An ashcake is a type of cornbread that is usually made by wrapping cornmeal in cabbage leaves and then baking the “package” in the hot ashes of a campfire.

We’re risking life and limb working on this puzzle …

59. Base of some aquaculture farms : SEED OYSTERS

That might be a lap around an oval running track.

The yeti, also known as “the abominable snowman”, is a beast of legend. “Yeti” is a Tibetan term, and the beast is fabled to live in the Himalayan regions of Nepal and Tibet. Our equivalent legend in North America is that of Bigfoot, also known as Sasquatch. The study of animals whose existence have not yet been substantiated is called cryptozoology.

The bomber pilot in Joseph Heller’s “Catch-22” is named Orr. He has no other name, just “Orr”.

Henry I of England was a son of William the Conqueror. According to legend, Henry died from eating “a surfeit of lampreys”, or more likely food poisoning. Lampreys look like a cross between a fish and an eel.

Henry VIII was the English King with the most wives. Well, something rubbed off on his last wife Catherine Parr. She was to become the English Queen with the most husbands! By the time she married Henry she had been widowed twice, and after Henry died she married once again, racking up four husbands in all.

7. Prop at a sales meeting : EASEL

The JPEG file format was created by the Joint Photographic Experts Group (JPEG), hence the name.