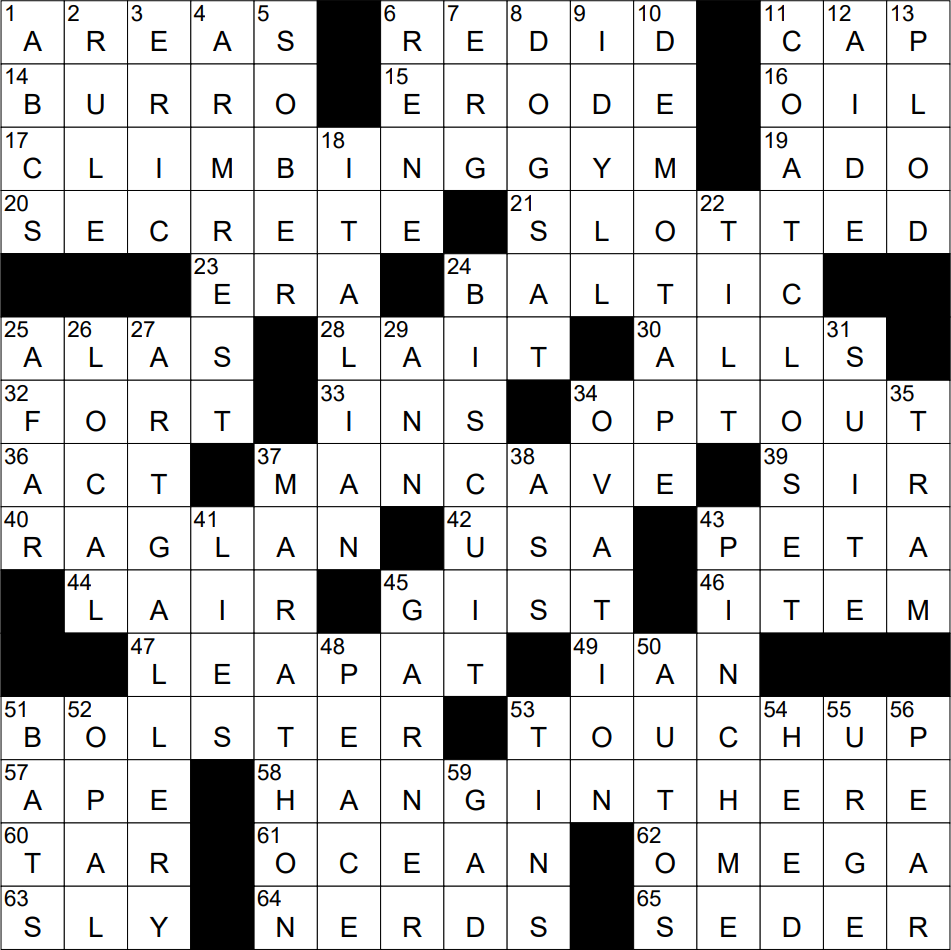 Constructed by: Margaret Seikel
Edited by: Will Shortz

Today’s Reveal Answer: Hang in There!

Themed answers are all locations where one might HANG (something):

16 Aioli ingredient … or three of the letters in “aioli” : OIL

40 Kind of sleeve that extends to the collar : RAGLAN

The hereditary title of Baron Raglan was created in 1852 as a reward for Lord Fitzroy Somerset for his service commanding the British troops during the Crimean War. It’s the raglan sleeve that gives the name to the raglan coat. A raglan sleeve extends right to the collar of the garment, a design used to fit the first Baron Raglan who had lost his arm at the Battle of Waterloo.

People for the Ethical Treatment of Animals (PETA) is a large animal rights organization, with about 300 employees and two million members and supporters worldwide. Although the group campaigns for animal rights across a broad spectrum of issues, it has a stated focus in opposition of four practices:

Pâté is a rich spreadable paste made from a mixture of ground meat and fat to which various vegetables, herbs and spices may be added. The most famous version of the paste is pâté de foie gras, which is made from the fattened livers of geese (“foie gras” means “fat liver” in French).

51 Give support to : BOLSTER

Back in Ireland I often slept in beds that had a bolster as well as pillows. The bolster was usually a long, bed-wide, stuffed cushion, harder than a pillow. It served the purpose of raising the pillows, perhaps as an aid for sitting up in bed. Our modern usage of the verb “bolster”, meaning to give a metaphoric shot in the arm, derives from this “bolster” that we used to sit up against.

The gorilla is the largest primate still in existence, and is one of the nearest living species to humans. Molecular biology studies have shown that our nearest relatives are in fact the species in the genus Pan (the chimpanzee and the bonobo), which split from the human branch of the family 4-6 million years ago. Gorillas and humans diverged at a point about 7 million years ago. The term “gorilla” derives from the Greek “gorillai” meaning “tribe of hairy women”. Wow …!

The La Brea Tar Pits are located right in the heart of the city of Los Angeles. At the site there is a constant flow of tar that seeps up to the surface from underground, a phenomenon that has been around for tens of thousands of years. What is significant is that much of the seeping tar is covered by water. Over many, many centuries animals came to the water to drink and became trapped in the tar as they entered the water to quench their thirst. The tar then preserved the bones of the dead animals. Today a museum is located right by the Tar Pits, recovering bones and displaying specimens of the animals found there. It’s well worth a visit if you are in town …

Omega is the last letter of the Greek alphabet and is the one that looks like a horseshoe (Ω) when in uppercase. The lowercase omega looks like a Latin W. The word “omega” literally means “great O” (O-mega). Compare this with the Greek letter Omicron, meaning “little O” (O-micron).

“I before E, except after C”. With so many exceptions, I think this is one rule that’s not taught in schools anymore …

The Tilt-A-Whirl is the fairground ride that has seven cars on a spinning platform, with the cars rotating freely and randomly. Each of the cars hold 3-4 riders; pretty nauseated riders at times.

48 What a dove symbolizes : PEACE

52 Birthstone for most Libras : OPAL