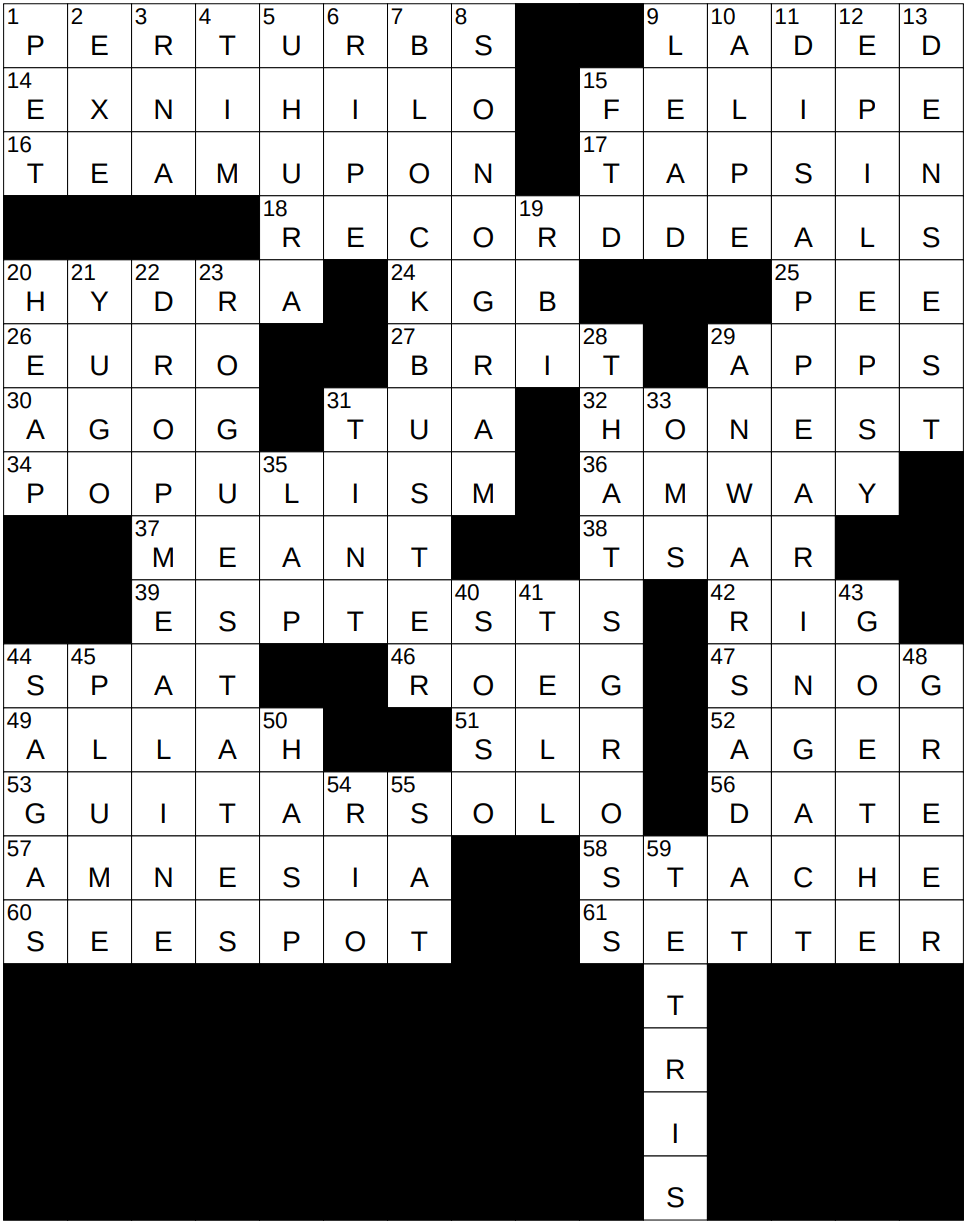 Themed answers refer to the video game Tetris. And, we have some magnificent grid art, with all of the black squares representing game pieces. Very inventive …

14 Out of nothing, in creation myths : EX NIHILO

Felipe VI became King of Spain in 2014 when his father, King Juan Carlos I, abdicated. Felipe is quite the competitive sailor, and comes from a sailing family. He was a member of the Spanish sailing team in the 1992 Olympics held in Barcelona. His father and sister also sailed for Spain’s Olympic sailing team.

That is probably golf …

Europop is a genre of pop music that is mainly associated with Sweden, but also applies to several other European countries. The most famous group associated with the genre is the Swedish sensation ABBA.

Mozzarella is an Italian cheese that is prepared using a spinning and cutting technique. It is the cutting that gives the cheese its name, as “mozzare” means “to cut” in Italian.

Populism is a political doctrine that appeals to the masses. Populists usually position themselves against the perceived “elite”.

A golden ager is a senior citizen.

53 It can be shredded with an ax : GUITAR SOLO

In the world of music, “axe” is a slang term describing a musical instrument, especially a guitar or horn.

56 One of three things traditionally eaten to break a Ramadan fast : DATE

“Amnesia”, meaning “loss of memory”, is a Greek word that we imported into English in the 17th century. The Greek term comes from combining the prefixes “a-” meaning “not” and “mnesi-” meaning “remembering”.

The “Dick and Jane” beginning reader series of books was originally written by William S. Gray and Zerna Sharp and first published in the 1930s. There are claims of plagiarism from an earlier pair of books published throughout the British Commonwealth that featured the characters Dick and Dora. Indeed, I grew up in Britain and Ireland with “Dick and Dora”, and always assumed that “Dick and Jane” were somehow their American cousins!

Lt. Nyota Uhura is the communications officer on board the Starship Enterprise, and was played by Nichelle Nichols in the original “Star Trek” television series. The role was significant in that Uhura was one of the first African American characters to figure front and center in US television. In a 1968 episode, Kirk (played by William Shatner) and Uhura kiss, the first interracial kiss to be broadcast in the US. Apparently the scene was meant to be shot twice, with and without the kiss, so that network executives could later decide which version to air. William Shatner claims that he deliberately ran long on the first take (with the kiss) and fluffed the hurried second take (without the kiss), so that the network would have no choice.

A sonogram is an image made using ultrasound. “Ultrasound” is the name given to sound energy that has frequencies above the audible range.

Osmium is a metallic element in the platinum family. Osmium is the densest naturally occurring element, and is about twice as dense as lead.

Back in 1910, fifteen florists from around America agreed to fulfill each other’s orders using the telegraph system, setting up what they called the Florists’ Telegraph Delivery. The concept grew so large that in 1965 the group started to offer international service, and changed its name to Florists’ Transworld Delivery (FTD).

21 Bygone car named for its country of origin : YUGO

The Yugo is a notoriously unreliable subcompact car that was built by the Zastava corporation of Yugoslavia.

Anwar Sadat was the third President of Egypt right up to the time of his assassination in 1981. Sadat won the Nobel Peace Prize in 1978, along with Israeli Prime Minister Menachem Begin, for the role played in crafting the Israel-Egypt Peace Treaty of 1978 at Camp David. It was this agreement that largely led to Sadat’s assassination three years later.