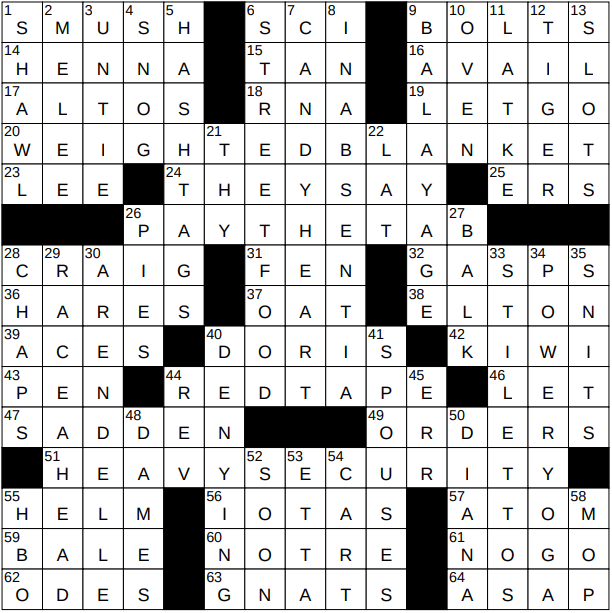 Constructed by: Erik Agard & Brooke Husic
Edited by: Will Shortz

Polymerase is an enzyme found in the body, It is tasked with making new RNA and DNA.

28 Name that anagrams to something you might smoke : CRAIG

Here is the opening paragraph of the novel “Emma”, by Jane Austen:

Emma Woodhouse, handsome, clever, and rich, with a comfortable home and happy disposition, seemed to unite some of the best blessings of existence; and had lived nearly twenty-one years in the world with very little to distress or vex her.

4 Make out, in Manchester : SNOG

8 One way to be tried : IN ABSENTIA

“In absentia” is Latin for “while absent”. For example, a person might be given an award in absentia, or perhaps be convicted of a crime in absentia.

Charles, Prince of Wales married Lady Diana Spencer in 1981 at St. Paul’s Cathedral in London. The wedding was a huge television event, with about 750 million people tuning in worldwide. Although the event was billed as the start of a fairytale marriage, the couple separated in 1992 and divorced in 1996. Lady Diana died in a car crash in Paris the following year.