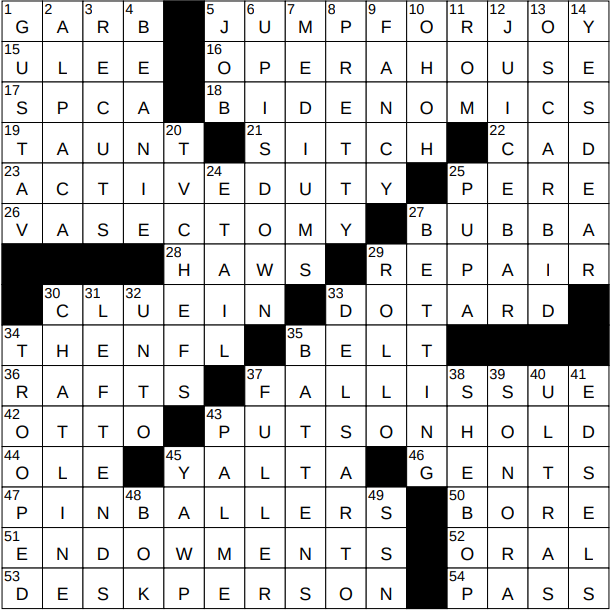 Peter Fonda is the son of actor Henry, brother of actress Jane, and father of actress Bridget. Peter nearly didn’t make it to the stage. He was one of the many children who have been victims of shooting accidents. Peter shot himself in the stomach when he was just 11-years-old, and very nearly died.

A central figure on Christmas Day is Santa Claus, aka “Father Christmas”, and “Père Noël” in French.

4 Rocky wears one in his famous training montage : BEANIE

If ever there was a movie that defined a career breakthrough for an actor, it would have to be “Rocky” for Sylvester Stallone. Stallone was a struggling actor in 1975 when a Muhammad Ali fight inspired Stallone to write a screenplay for a boxing movie, which he did in just three days. His efforts to sell the script went well but for the fact that the interested studios wanted a big name for the lead role, and Stallone was determined to be the star himself. Stallone persevered and “Rocky” was eventually made with him playing the title role of Rocky Balboa. The movie won three Oscars, and “Sly” Stallone had arrived …

5 Book that originated the phrase “skin of my teeth” : JOB

It is believed that the Book of Job is the oldest book in the Bible.

Romania sits just east of Hungary and north of Bulgaria in Europe. It was formed from the union of two principalities in 1859, Moldavia and Wallachia. The Kingdom of Romania grew larger in size after WWI with the addition of three new regions, including the “vampirish” Transylvania.

Romanian Nadia Comaneci won three golds in the 1976 Summer Olympics and was the first gymnast to be awarded a perfect score of ten in the gymnastics competition. Comaneci published a book called “Letters to a Young Gymnast” in 2003, and now lives in the United States.

“E-tail” is the term used these days for online shopping (coming from “retail”). E-tail is often compared to regular shopping in the “real world” by juxtaposing it with a “brick-and-mortar” store.

Battens are strips of wood, especially those used to secure canvas covers over a ship’s hatches. The phrase “batten down the hatches” means “to prepare for disaster, the impending storm”.

Sonora is the state in Mexico that lies just south of Arizona and New Mexico. It is the second-largest state in the country, after Chihuahua.

“Rama Lama Ding Dong” was a hit in 1961, although it had been released in 1957 under the erroneous title “Lama Rama Ding Dong” and didn’t quite make it. The song was recorded by the doo-wop group called the Edsels, named after the latest (and “doomed”) Ford automobile. Before becoming the Edsels, the group was called the Essos, after the oil company.

Derek Bok was President of Harvard from 1971 to 1991, returning in 2006 for a year to act as President after the resignation of Lawrence Summers.