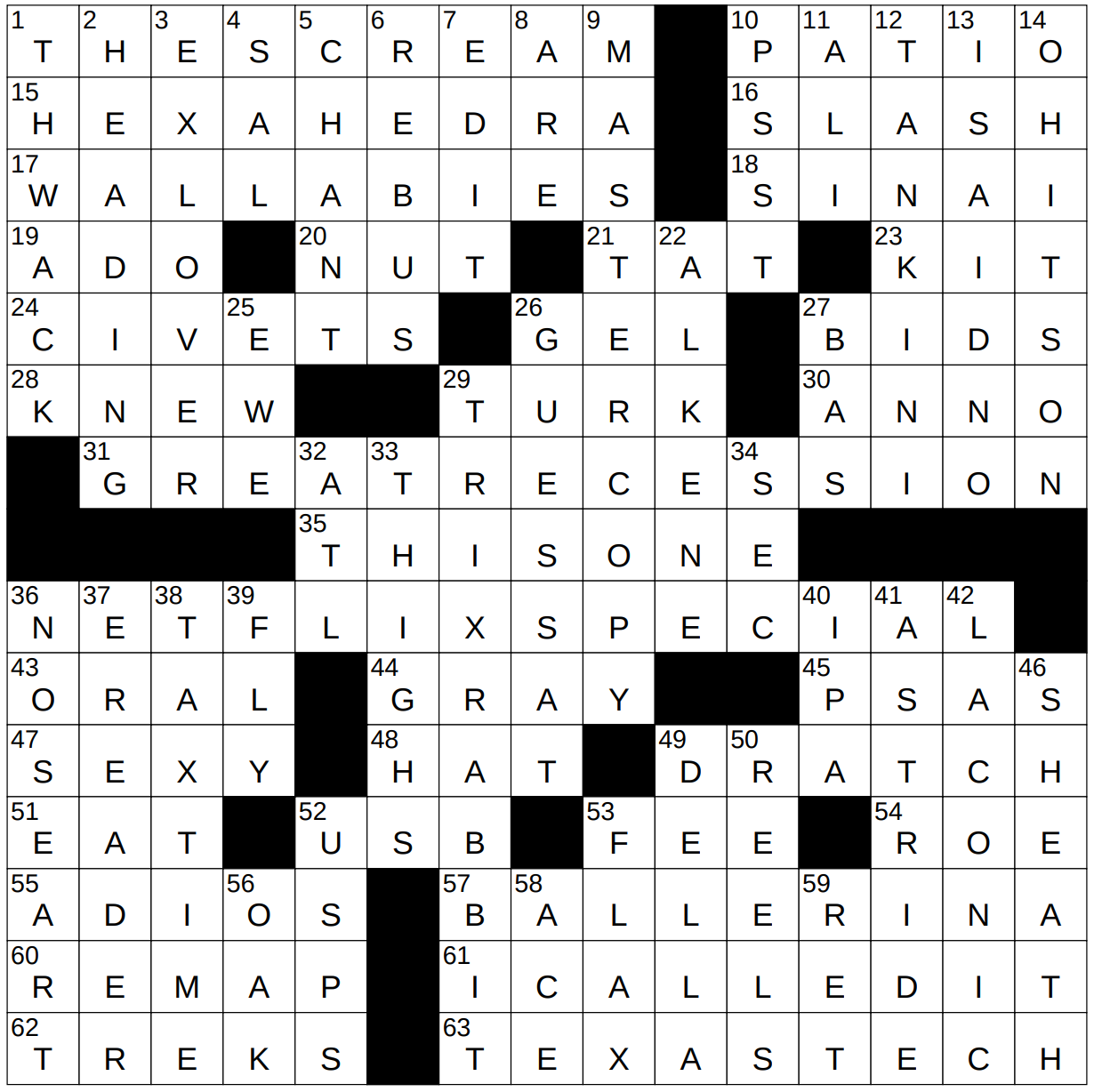 Wallabies are marsupials native to Australia and New Guinea that look like small kangaroos. One early name for the wallaby was “brush-kangaroo”.

In Australia, male kangaroos are known by several names including bucks, boomers, jacks or old men. Females are called does, flyers, or jills. There seems to be just one name for young kangaroos, i.e. joeys. A group of kangaroos might be called a mob, troop or court.

30 Word on a cornerstone : ANNO

The Latin word for year is “annus”. We often see it used in Latin phrases, but usually with a different spelling. In “anno Domini”, the “anno” is the ablative case of “annus” as the phrase means “in the year of the Lord”. Another example is “per annum”, in which “annum” is the accusative case as the literal translation of the phrase is “during the year”.

Hannah Gadsby is a comedian from Australia. She garnered a lot of attention in 2018 with the release of her stand-up show on Netflix under the title “Nanette”. That show, filmed at the Sydney Opera House, won an Emmy and a Peabody Award.

The Japanese dish called “masago” is actually the roe of the capelin fish. Masago is often mixed with wasabi and served as “wasabi caviar”.

63 Campus with a landmark statue of Will Rogers on his horse Soapsuds : TEXAS TECH

Will Rogers was such a successful actor that he was the highest paid Hollywood star in the 1930s. Sadly, his career was cut short as he died in a plane crash in 1935. Piloting the doomed aircraft was famed aviator Wily Post, the first person to fly solo around the world.

A “tankini” is a two-piece bathing suit comprising a “tank” top and a “bikini” bottom.

14 Verbal equivalent of picking up the gauntlet : OH, IT’S ON

Roquefort is a cheese made from sheep milk. It comes from the commune of Roquefort-sur-Soulzon in the South of France.

32 Code for the primary hub of Delta Air Lines : ATL

“Fuselage” is a French word that we imported into English in the early days of powered flight. The French term developed from “fuselé” meaning “spindle-shaped”, a reference to the shape of a fuselage. “Fusus” is Latin for “spindle”.

The Lagunitas Brewing Company was founded in 1993 and takes its name from Lagunitas, California where the brewery was originally located. Famously, the brewery has been associated with the use of marijuana. There used to be a tradition of a weekly party at which marijuana was openly smoked. The State of California went so far as to shut down operations in 2005 for twenty days while they investigated alleged cannabis dealing. No charges were filed, and the Lagunitas later brought out a beer called “Undercover Investigation Shut-Down Ale”.

A katana is a curved sword worn by the samurai of Japan. It is sometimes referred to as a “samurai sword”.

49 “And That Reminds Me” singer Reese : DELLA

Apparently, there was a 1772 magazine article that described “flabbergasted” as a word that was in vogue at the time. That article also stated that the origin of the term was uncertain. Someone who is flabbergasted is utterly astonished. Like me, most of the time …

That would be baseball, I think …