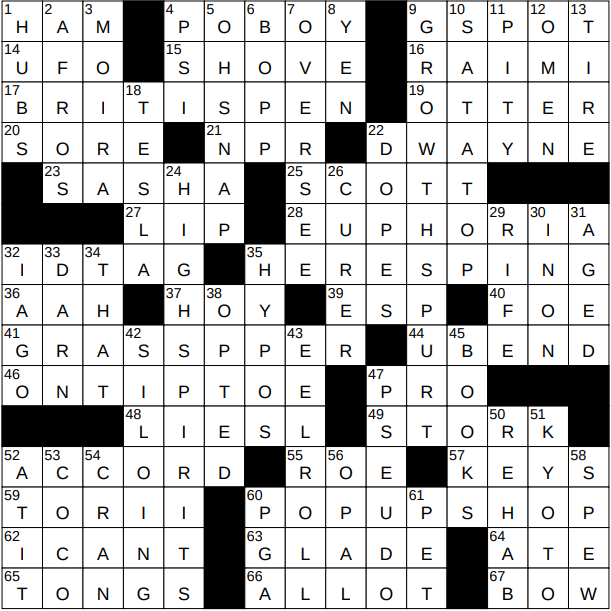 Themed answers each include the hidden word “SHOP”, with the “HO” POPPING UP into the line above in the grid:

A po’ boy is a submarine sandwich from Louisiana. The name of the sandwich apparently dates back to 1929. It was a sandwich given away free to streetcar workers in New Orleans during a strike, i.e. to “poor boys” not earning a wage. A po’ boy differs from a regular submarine sandwich in that it uses Louisiana French bread, which is soft in the middle and crusty on the outside.

The golf tournament that we usually refer to as “the British Open” here in North America, is more correctly known as “The Open Championship”. The tournament has earned its somewhat haughty title as it is the oldest golf tournament in the world. The Open was first played in 1860, at Scotland’s Prestwick Golf Club. That first tournament attracted a grand field of eight professional golfers, with Scotsman Willie Park, Sr. emerging victorious.

19 Animal in the same family as the wolverine : OTTER

The wolverine is a mammal related to weasels and stoats that looks more like a small bear. Adult wolverines are about the size of a medium dog, but tend to be quite ferocious and can take down a prey that is several times its size.

No one seems to know for sure who the “Scott” is in the exclamation “great Scott!”. One theory is that the reference is to the commander-in-chief of the US Army during the Civil War, General Winfield Scott. Scott weighed in at 300 pounds later in his life, and was so obese that he could not ride a horse.

In German and Dutch society, storks resting on the roof of a house were considered a sign of good luck. This tradition led to nursery stories that babies were brought to families by storks.

55 Tobiko or ikura, at a Japanese restaurant : ROE

“Questlove” (also “?uestlove”) is the stage name of musician and DJ Ahmir Khalib Thompson. He is the drummer of hip-hop band the Roots. The Roots were the house band on “Late Night with Jimmy Fallon”, and followed the host when he moved in 2014 to “The Tonight Show Starring Jimmy Fallon”.

Catherine O’Hara is an actress and comedian from Toronto, Ontario. One of O’Hara’s more famous film roles is Kevin’s mother in the Christmas classic “Home Alone”. She also plays a lead character (Moira) in the excellent sitcom “Schitt’s Creek” alongside Eugen Levy.

6 He independently discovered the same comet as Hale : BOPP

A shaman is a supposed intermediary between the human world and the spirit world.

A pseudo (or “pseud”) is an artificial or pretentious person.

51 Home of Nijo Castle, built by the Tokugawa shogunate : KYOTO