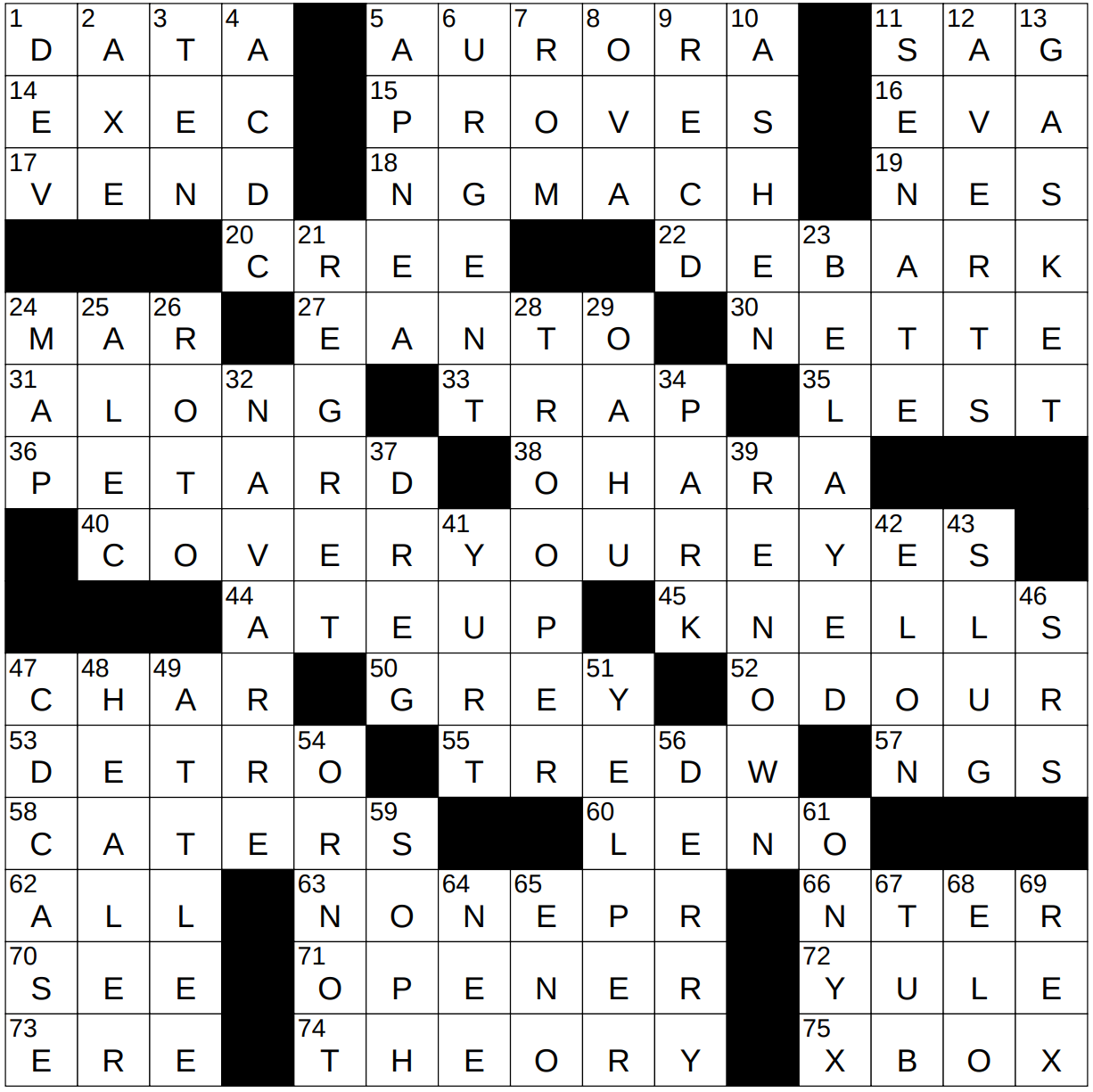 Constructed by: Samuel A. Donaldson & Doug Peterson
Edited by: Will Shortz

Four rows in the grid use three clues collectively. Also, those rows contain answers that span the whole grid, with the letter I being covered by black squares. Clever …

1 It may be mined or crunched : DATA

5 Night lights, of a sort : AURORA

I am most familiar with actress Eva Mendes as the female lead in the movie “Hitch”, in which she played opposite Will Smith. Mendes started a relationship with fellow actor Ryan Gosling in 2011, and the couple have two children together.

20 An official language of the Northwest Territories : CREE

In getting on and off a seagoing vessel, one embarks and debarks. The terms “embark” and “debark” come from the name of the small ship known as a barque.

There is no evidence that Marie Antoinette ever uttered the words “Let them eat cake”. The phrase was attributed to “a great princess” though, by the philosopher Jean-Jacques Rousseau. Rousseau wrote in his autobiography:

Sand traps on a golf course are referred to as bunkers on the other side of the Atlantic.

“Lest we forget” is an oft-quoted phrase, one that comes from a poem by Rudyard Kipling called “Recessional”. Kipling wrote the piece on the occasion of the Diamond Jubilee of Queen Victoria in 1897 and used it to express sadness at the waning of the British Empire. The phrase “lest we forget” is used in this context, a warning that the empire will decline. Ever since WWI we’ve been using the words on memorials as a plea not to forget the sacrifices made by others in the past.

The word “knell” is used for a solemn ring from a bell, often associated with death or a funeral. “Knell” comes from the Old English “cnell” and is probably imitative in origin, sounding like a peal from a large bell.

Sussex is a county in the southeast of England that lies right on the English Channel. The county of Sussex has about the same boundaries as the ancient Kingdom of Sussex, a Saxon colony that existed for about five hundred years until the Battle of Hastings in 1066. Hastings, a town on the Sussex coast, was the site of the first battle of the Norman Conquest of England.

The Detroit Red Wings play in the National Hockey League (NHL). The Red Wings have won the Stanley Cup more times than any other US-based NHL team.

“Thunderstruck” is a single by Australian hard rock band AC/DC released in 1990. The title of the song was used for a 2004 Australian film about five AC/DC fans.

11 House that’s not the House : SENATE

The East Asian nation of Mongolia lies between Russia to the north and China to the south. With an area of over 600,000 square miles and a population of about 3 million people, Mongolia is the most sparsely populated sovereign nation on the planet. Almost half of the Mongolian populace lives in the capital city of Ulan Bator.

The North Carolina city of Greensboro was founded in 1808 as Greensborough, with the spelling changing in 1895. The city was named for Major General Nathanael Greene who commanded the defeated American forces at the Battle of Guilford Courthouse during the Revolutionary War. Although technically a defeat, Greene’s forces inflicted such heavy casualties on the British Army, led by Lieutenant General Charles Cornwallis, that the outcome was a strategic victory for the Americans.

A CD case is also known as a jewel box, and I am really not sure why. I’ve heard some explanations, but not one that I really buy …

“Frosh” is a slang term for a college freshperson (formerly “freshman”). We call such a person a “fresher” back in Ireland …

69 Playmate of Fido and Rover : REX