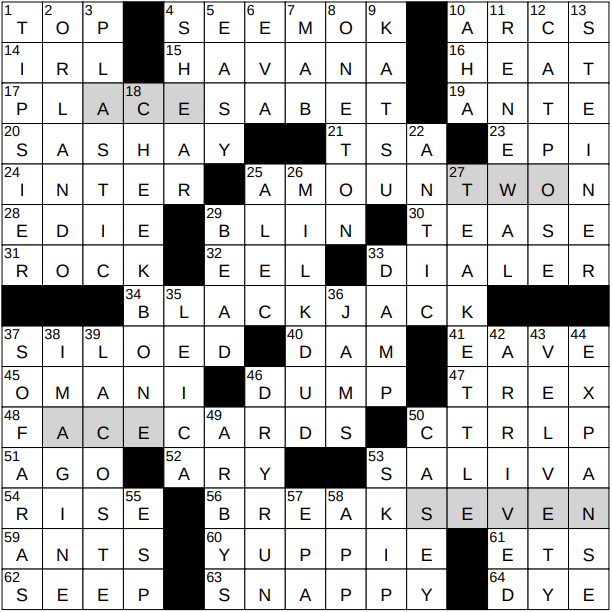 Constructed by: Helen Chen
Edited by: Will Shortz

Themed answers relate to gambling in a casino. Each answer includes a playing card as a hidden word. The sum of those cards adds up to 21, a great count in BLACKJACK:

15 Where Hemingway worked on “For Whom the Bell Tolls” : HAVANA

Ernest Hemingway moved around a lot. He was born in Illinois, and after leaving school headed to the Italian front during WWI. There he served as an ambulance driver, an experience he used as inspiration for “A Farewell to Arms”. He returned to the US after being seriously wounded, but a few years later moved to Paris where he worked as a foreign correspondent. He covered the Spanish War as a journalist, from Spain, using this experience for “For Whom the Bell Tolls”. During the thirties and forties he had two permanent residences, one in Key West, Florida and one in Cuba. In the late fifties he moved to Ketchum, Idaho, where he committed suicide in 1961.

“For Whom the Bell Tolls” is a 1940 novel by author Ernest Hemingway that tells the story of an American fighting for a republican guerilla unit during the Spanish Civil War. The novel is based on Hemingway’s own experiences during the conflict. The title is taken from a work by metaphysical poet John Donne called “Devotions upon Emergent Occasions”.

Despite the name, “buckwheat” is not related to wheat, and nor is it a grass. Buckwheat is related to rhubarb. As the seeds are eaten, it is known as a “pseudocereal”. The name comes from “beech wheat”, a reference to the resemblance of buckwheat seeds to beech nuts from the “beech” tree, and the fact that buckwheat seeds are used like “wheat”.

Robocalls; why can’t they be stopped? Why not, why not …?

34 *Casino game associated with the sum of this puzzle’s shaded squares : BLACKJACK

45 Neighbor of a Saudi : OMANI

“American Psycho” is a comedy horror film released in 2000 that is based on a 1991 novel of the same name by Bret Easton Ellis. I don’t do horror, comedic or not …

The term “tipsy” comes from the verb “to tip” meaning “to overturn, knock over”, and has been meaning “drunk” since the late 1500s.

2 Location of the “The Most Magical Place on Earth” : ORLANDO

6 Actress Noblezada who got a Grammy for “Hadestown” : EVA

Eva Noblezada is an actress and singer who debuted on Broadway playing the lead in a 2017 revival of “Miss Saigon”. That performance earned her a Tony nomination, as did her portrayal of Eurydice in “Hadestown”.

8 Approximate weight of the Liberty Bell : ONE TON

The Liberty Bell was commissioned in 1752 and installed in the steeple of the Pennsylvania State House, now known as Independence Hall in Philadelphia. The bell bears the inscription “Proclaim LIBERTY throughout the land unto all the inhabitants thereof”, a quotation from the Book of Leviticus in the Bible. Famously, the bell cracked when it was first rung in Philadelphia after arriving from the foundry where it was made in London, England. The bell’s fame originated with a short story by George Lippard published in 1847 that gave a fictional account of an old bell-ringer ringing it on July 4, 1776 upon hearing that the Second Continental Congress had voted for independence. That ringing of the bell never actually happened, even though the account was constantly presented as fact in school texts around the country for generations.

The yoga pose called bidalasana is also referred to as the cat pose. The practitioner usually kneels on all fours, and arches the back. The counterpose, with the back lowered, is the cow pose.

The 1942 movie “Now, Voyager” stars Bette Davis, Paul Henreid and Claude Rains. The film is based on a novel of the same name by Olive Higgins Prouty. Prouty lifted the title of her book from the Walt Whitman poem “The Untold Want”:

I suppose one might be forgiven for thinking that “shenanigan” is an Irish term, as it certainly sounds Irish. Usually written in the plural, shenanigans are acts of mischief, pranks. Apparently the word is of uncertain derivation, but was coined in San Francisco or Sacramento, California in the mid-1800s.

René Lacoste was a French tennis player who went into the clothing business, and came up with a more comfortable shirt that players could use. This became known as a “tennis shirt”. When it was adopted for use in the sport of polo, the shirts also became known as “polo shirts”. The “golf shirt” is basically the same thing. The Lacoste line of clothing features a crocodile logo, because René was nicknamed “The Crocodile”.

Casey Jones was a famous railroad engineer who is remembered in the traditional song “The Ballad of Casey Jones”. The song tells us the story of Jones trying to stop his speeding train as it races towards another locomotive on the same line.

The main legislation governing water pollution in the US is the Clean Water Act (CWA), which became law in 1972.