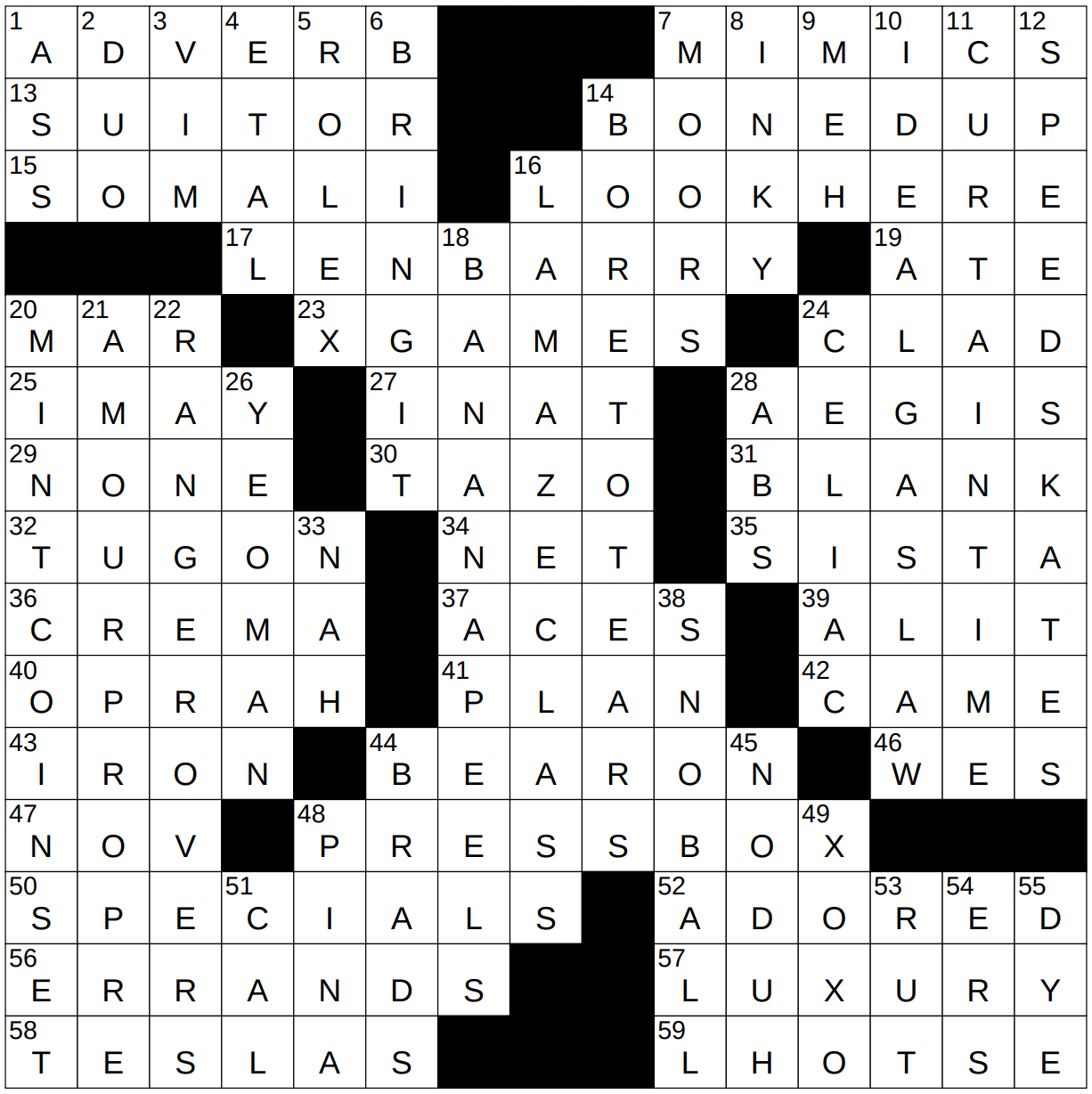 Bill’s time: Gave up after 60 minutes!

Bill’s errors: Lots of blank squares in the top of the grid!

13 One of many for Penelope in the “Odyssey” : SUITOR

According to Homer’s epic poem “Odyssey”, Penelope was the wife of Odysseus. Penelope found herself having to fend off a total of 108 suitors while Odysseus was away on his 20-year journey, but she remained loyal to her husband. In fact, when Odysseus returned, he disguised himself as a beggar in order to spy on his wife and determine if she had indeed been faithful to him.

The phrasal verb “to bone up” means “to study”, and is student slang that dates back to the 1880s. The term probably comes from a series of books used by students back then called “Bohn’s Classical Library”.

15 One of five official languages of Ethiopia : SOMALI

Len Barry is a retired singer, and originally the front man for a group called the Dovells formed by friends in high school. After recording a number of hits with the Dovells, Barry had a successful solo career.

Sista Monica Parker is a singer from Gary, Indiana who is known as “the lioness of the blues”.

“Crema” is the name given to that brown foam that sits on the top of a freshly prepared cup of espresso. There’s no milk involved; just foamy coffee.

November is the eleventh month in our calendar. The name comes from the Latin “novem” meaning “nine”, as November was the ninth month in the ancient Roman calendar.

58 Lineup at a charging station : TESLAS

Ah yes, the Ideal Gas Law! I remember this from my chemistry classes. One of the basic conclusions one can draw from the law is that under ideal conditions, all gases have the same volume at the same temperature and pressure. The idea is that the individual molecules in a gas are so far away from each other that the actual components of the molecule has negligible influence on the physical properties of the gas. A gas molecule is just a gas molecule. Well, sort of …

The Range Rover is the luxury version of the celebrated Land Rover made in England. The first Range Rover was produced in 1970.

24 Cause of some belly-aching : CELIAC

Our word “celiac” is used for things related to the abdomen. The term is derived from the Greek “koiliakous” meaning “pertaining to the bowels”.

26 Attendant in a noble household : YEOMAN

54 Settings for some TV dramas, in brief : ERS