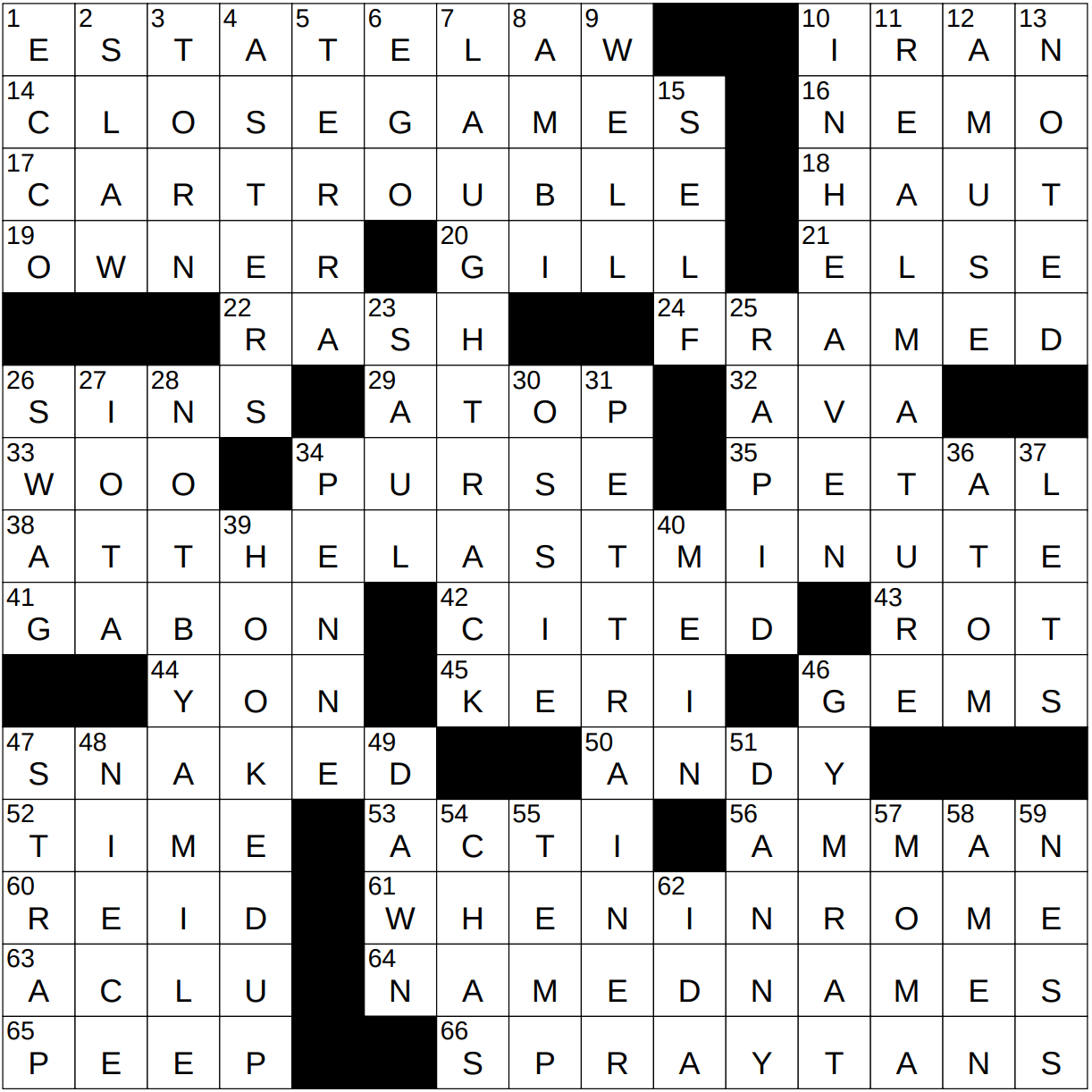 17 What pings may indicate : CAR TROUBLE

The French capital Paris is nicknamed “La Ville Lumière” (The City of Light). There are two justifications cited for the moniker. Firstly, the city played a leading role during Europe’s Age of Enlightenment, in the 18th century. In fact, the French refer to the era as “the Century of Lights”. Secondly, and more literally, Paris was one of the first cities in Europe to adopt widespread gas street lighting. There were about 56,000 gas lights illuminating the streets of Paris in the 1860s.

A clutch purse is a handbag with no strap at all. It is designed to be carried in the hand, to be “clutched”.

41 Libreville is its capital : GABON

Keri Hilson started her career as a songwriter producing hit tracks for others, but she has been making a name for herself as a singer in her own right in the past few years. Having said that, it’s a name that I didn’t know, but I live in the past …

53 When Hamilton meets Burr, in “Hamilton” : ACT I

Amman is the capital city of Jordan, and one of the oldest continuously-inhabited cities in the world. Amman has been occupied by a number of different civilizations over the centuries, including the Greeks who called it “Philadelphia”, a name retained by the Romans when they occupied the city just after 100 AD.

Actor Tim Reid appeared on the sitcom “WKRP in Cincinnati”. He played the character Venus Flytrap, one of the disc jockeys at the station.

“Sister, Sister” is a sitcom that originally aired from 1994 to 1999 starring identical twin sisters Tia and Tamera Mowry. Tia and Tamera play two sisters who were separated at birth, one being adopted by a single mother, and the other by a single father. The sisters happen upon each other 14 years later, and hilarity ensues …

61 What one might say before conforming : WHEN IN ROME

2 Side dish with pastrami : SLAW

In the US, pastrami was originally called “pastrama”, and was a dish brought to America by Jewish immigrants from Romania in the second half of the nineteenth century. The original name may have evolved from the Turkish word “pastirma” meaning “pressed”. “Pastrama” likely morphed into “pastrami” influenced by the name of the Italian sausage called salami.

Actress and comedian Ego Nwodim joined the cast of “Saturday Night Live” in 2018. She was a biology major at the University of Southern California, a classic foundation for a successful comedian …

Ossie Davis was a very successful actor, and also a director, poet, playwright and social activist. One of Davis’s better known performances was in the 1993 movie “Grumpy Old Men”, in which he played the owner of the bait shop by the lake.

46 One who’s probably going to work out : GYM RAT

“Gym rat” is a slang term describing someone who spends much of his or her leisure time playing sports or working out at the gym. Never been called a gym rat …

Hairdresser Jonathan Van Ness is best known as the grooming expert on the TV show “Queer Eye” (the Netflix revival of the original series). He joined the cast in 2018.

“Queer Eye” is a reality TV show that was launched in 2003 as “Queer Eye for the Straight Guy”. Each episode features a panel of gay professional experts in the fields of fashion and design giving a makeover to a straight man. The show was given a new life in 2018 when it was launched on Netflix as “Queer Eye” with a new “Fab Five” cast.