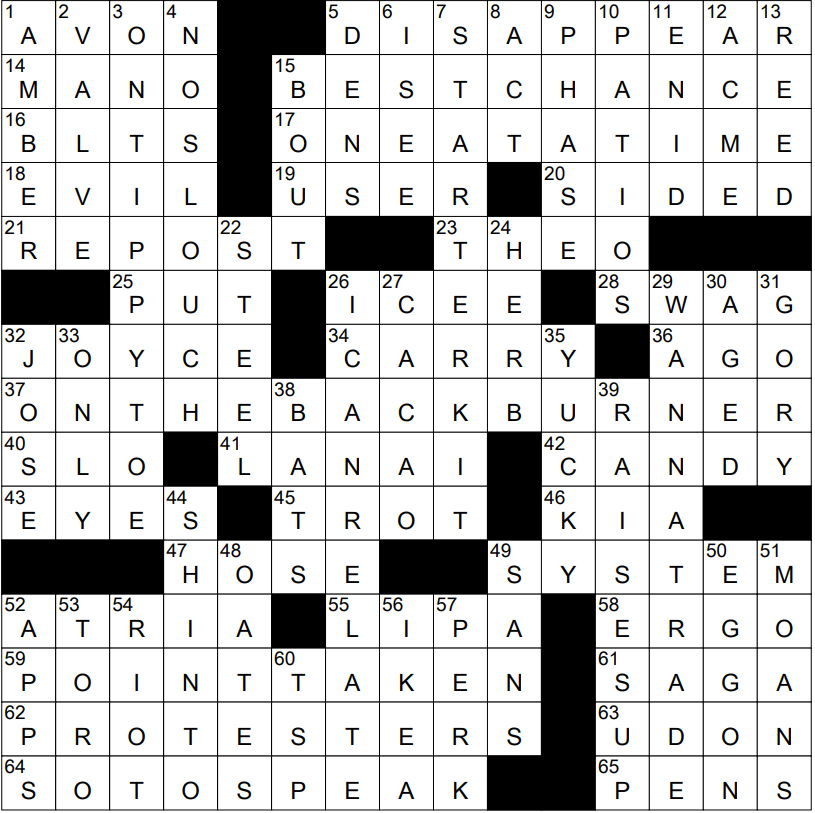 Constructed by: Claire Rimkus & Brooke Husic
Edited by: Will Shortz

Tumblr.com is a website that mainly hosts private blogs.

Theology is the study of religious faith. The term comes from the Greek “theos” meaning “god” and “-logos” meaning “treating of”.

Slo-pitch (or “slow-pitch”) is a type of softball.

Maui County is pretty unusual. It is made up of four islands: Maui, Kahoolawe, Lanai and Molokai (well, most of Molokai).

“The Twilight Saga” is a series of films based on the “Twilight” series of books by Stephenie Meyer. They’re all about vampires. I don’t do vampires …

A. T. Cross is a company that claims to be the oldest manufacturer of fine pens. Cross was founded in 1846 in Providence, Rhode Island by one Richard Cross. Richard passed the company on to his son Alonzo T. Cross, who gave it the current name.

2 Key for a trumpet : VALVE

8 The musical “Come From Away” has one : ACT

“Come from Away” is a 2013 musical that is based on the true story of what happened when 38 planes were ordered to land on the island of Newfoundland following the 9/11 attacks in the US. After the planes landed at Gander airport, the small town of Gander had to cope with almost 7,000 stranded passengers, a number that was about double the town’s population.

13 Oregon college whose mascot is a griffin : REED

27 Ingredient in some mole : CACAO

Echolocation, when used by animals, is known as biosonar. The best-known example of an animal using biosonar is probably the bat, although not all species of bat use sounds to locate objects.

50 Encourage, maybe too much : EGG ON

56 Store with a three-syllable name in four letters : IKEA

60 Shortening in a recipe : TSP