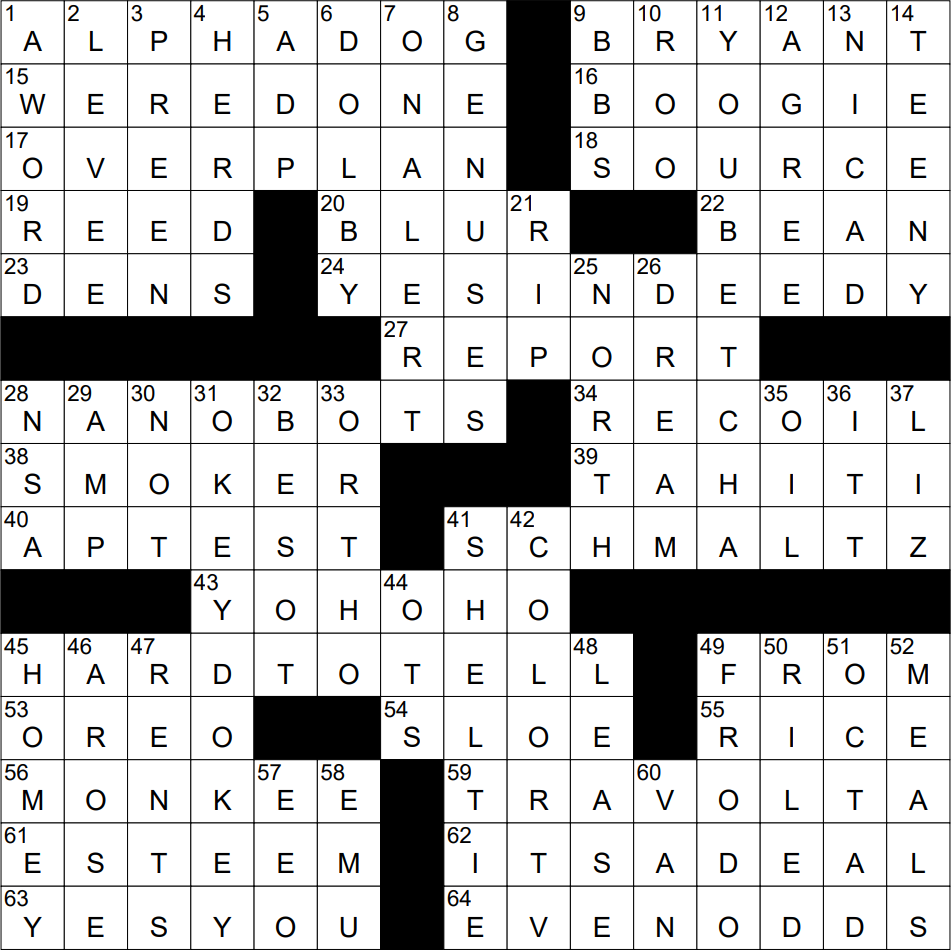 Constructed by: Robert Logan
Edited by: Will Shortz

All across answers comprise an even number of letters, and all down answers an odd number:

Actor and comedian Aidy Bryant made her debut on “Saturday Night Live” in 2012. Bryant married fellow comedian Conner O’Malley in 2018.

Cattails are flowering plants found in wetlands. We call them bulrushes back in Ireland …

22 Coveted magic item in Sondheim’s “Into the Woods” : BEAN

“Into the Woods” is a Stephen Sondheim musical that premiered in 1986. The storyline uses characters from several fairy tales, including “Little Red Riding Hood”, “Jack and the Beanstalk”, “Rapunzel” and “Cinderella”. The borrowed characters are held together with an underlying original tale about a baker and his wife who long to have a child, but cannot due to a curse placed on them by a witch.

Nanorobots (also “nanobots”) are tiny devices that range from 0.1 to 10 micrometers in size. The technology of nanorobotics is in its infancy, but it is hoped that nanobots might be used (for example) in medicine one day. The oft-cited application is the use of nanobots inserted inside the body to identify and destroy cancer cells.

39 Largest of the Society Islands : TAHITI

The Society Islands (in French, “Îles de la Société”) are a group of islands in the South Pacific that are part of French Polynesia. It is thought that the islands were named by English explorer Captain James Cook in honor of the Royal Society. The Society Islands are divided into two groups: The Windward Islands (the most famous of which is Tahiti) and the Leeward Islands (which includes the island of Bora Bora).

56 Davy Jones was one : MONKEE

Davy Jones was the apparent lead vocalist for the Monkees, but it was drummer Micky Dolenz who took the lead in most of their hit songs. Peter Tork was the band member who was portrayed as the “dumb one” on “The Monkees” television show, but he was far from a dummy. In the early days of the band, session musicians played all the instruments for the records, except Tork. Tork got to play his guitar. The things that are kept from us …

59 Portrayer of the lawyer Robert Shapiro in “The People v. O.J. Simpson” : TRAVOLTA

“American Crime Story” is a true crime anthology TV series. Each season is a standalone mini-series. The first three seasons aired were:

A levee is an artificial bank, usually made of earth, that runs along the length of a river. It is designed to hold back river water at a time of potential flooding. “Levée” is the French word for “raised” and is an American term that originated in French-speaking New Orleans around 1720.

4 Accomplishes the impossible with cats : HERDS

The idiomatic phrase “herding cats” describes a futile attempt to control a group of people (perhaps) who are inherently uncontrollable. This phrase originated relatively recently, and appears to come from a line spoken in the 1979 film “Monty Python’s Life of Brian”. In the movie’s opening, three shepherds are discussing sheep, and move on to cats: “Can you imagine a herd of cats waiting to be sheared? Meow! Meow! Woo hoo hoo.”

Automatic Data Processing (ADP) is an enterprise based in Roseland, New Jersey that provides business services to companies. The company was founded back in 1949 by Henry Taub as Automatic Payrolls, Inc.

8 They make up families : GENUSES

A NiCad rechargeable battery is so called because the electrodes are made of nickel oxide hydroxide (“Ni”) and metallic cadmium (“Cad”).

The National Security Agency (NSA) runs an annual Codebreaker Challenge that is aimed mainly at the student population. As best I can tell, the focus of the challenge is reverse software engineering. Checking out the Codebreaker Challenge website suggests that the NSA runs this program in order to identify and attract potential new employees.

29 Something that may be toted on a tour : AMP

International Telephone & Telegraph (ITT) was formed in 1920 from the Puerto Rico Telephone Company. ITT divested its telecommunications business in 1986, today the company is known for its products in the field of water and fluids management, as well motion and flow control. Many of ITT’s products are sold into the aerospace market.

Liz Cheney is the eldest daughter of former Vice President Dick Cheney. She was elected to the US House of Representatives in 2016, representing the state of Woming’s single seat. Her father held that same seat for ten years. Watch this space …

Frodo Baggins is a principal character in J. R. R. Tolkien’s “The Lord of the Rings”. Frodo is a Hobbit, and is charged with the quest of destroying Sauron’s Ring in the fires of Mount Doom. Frodo is portrayed by American actor Elijah Wood in Peter Jackson’s film adaptations of the novels.