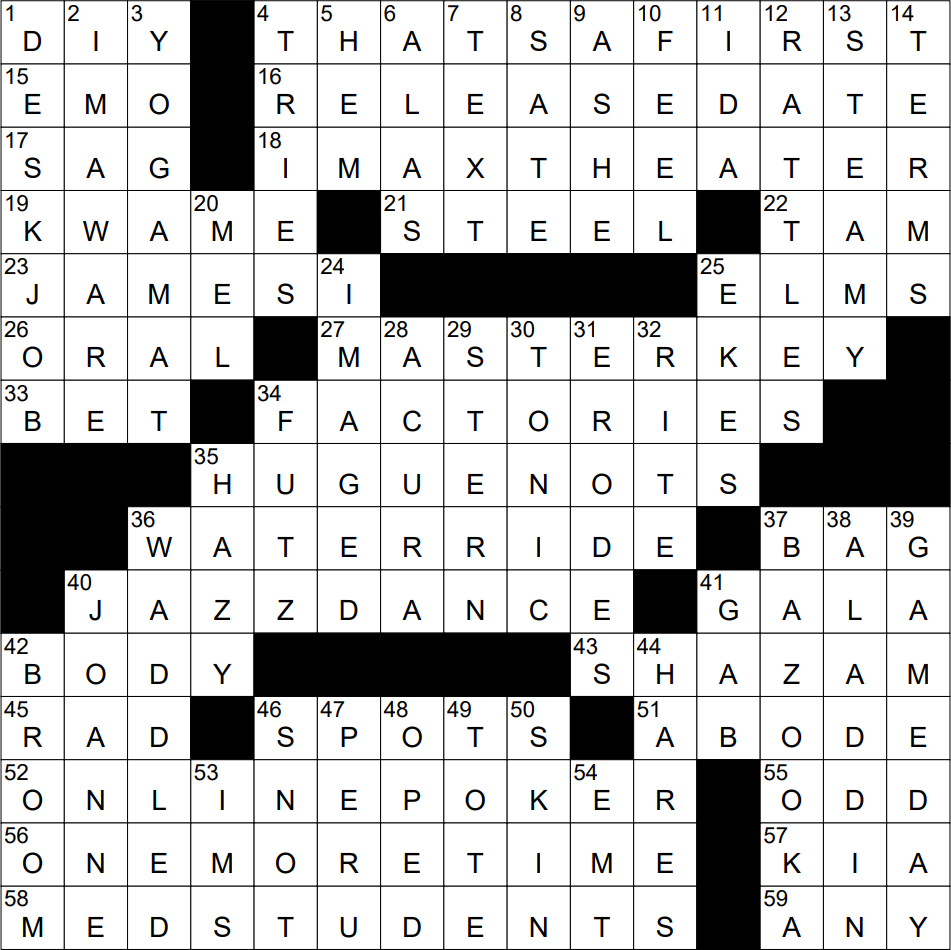 The DIY Network is a television channel that focuses on DIY (do-it-yourself) projects. You can learn about anything from rebuilding an engine to scrapbooking on the DIY channel.

18 Where to see the big picture? : IMAX THEATER

Kwame Nkrumah led the Gold Coast into independence from British rule, under its new name “Ghana”. He was leader of his country from 1952 until 1966, when he and his government were overthrown in a military coup (backed by the CIA). Nkrumah went into exile in Guinea, never to return to Ghana.

A tam o’shanter is a man’s cap worn traditionally by Scotsmen. “Tams” were originally all blue (and called “blue bonnets”) but as more dyes became readily available they became more colorful. The name of the cap comes from the title character of the Robert Burns poem “Tam o’ Shanter”. A pom-pom adorning a tam is known as a toorie.

The Royal House of Stewart (also “Stuart”) came to power in Scotland in the late 14th century, starting with Robert II of Scotland. The Stewarts extended their power to England and Ireland when the Tudor line became extinct as Queen Elizabeth I died without issue. James VI of Scotland became James I of England at that time. The last Stuart monarch was Anne, Queen of Great Britain who also died without issue, despite going through seventeen pregnancies. Assuming Prince William, Duke of Cambridge becomes the British Monarch one day, then there will be a Stewart descendant on the throne again. William is the son of Diana, Princess of Wales, and Diana was descended from the Stewart monarchs.

35 Religious group affected by the Edict of Nantes : HUGUENOTS

The Disneyland ride called Splash Mountain is inspired by the 1946 Disney movie “Song of the South”, which in turn is based on the “Uncle Remus” stories featuring Br’er Rabbit and friends. The most famous song heard while on the ride is “Zip-a-Dee-Doo-Dah”, which comes from the film’s soundtrack. Splash Mountain made its debut in 1989 in Disneyland in Anaheim. The same ride opened in Disneyworld in florida and Tokyo Disneyland in 1992. The “splashy” ride was deemed unsuitable for Disneyland Paris due to the frequent cold weather in that part of Europe.

43 Superhero with a lightning bolt on his costume : SHAZAM

“Shazam” is a word that was coined in the “Captain Marvel” comics in 1940. Billy Batson is a boy who can transform himself into the superhero Captain Marvel (aka “Shazam”) by speaking the magic word “Shazam”. “Shazam” is actually an acronym standing for “Solomon, Hercules, Atlas, Zeus, Achilles, and Mercury”.

“Tyler, the Creator” is the stage name of rap singer Tyler Okonma.

South Korean automaker Kia has been making the subcompact model called the Rio since 2000.

8 Kind of sauce made with peanuts : SATE

The original tonic water was a fairly strong solution of the drug quinine dissolved in carbonated water. It was used in tropical areas in South Asia and Africa where malaria is rampant. The quinine has a prophylactic effect against the disease, and was formulated as “tonic water” so that it could be easily distributed. In British colonial India, the colonial types got into the habit of mixing gin with the tonic water to make it more palatable by hiding the bitter taste of quinine. Nowadays, the level of quinine in tonic water has dropped, and sugar has been added.

37 Gum brand with a red, white and blue wrapper : BAZOOKA

40 Woodward or Whalley of the big screen : JOANNE

Joanne Woodward is perhaps best-known for her Oscar-winning performance in 1957’s “The Three Faces of Eve”, and for being married to Paul Newman.

48 Something that gives takes : OP-ED

53 Contents of some chats, in brief : IMS